No-till and other reduced tillage systems continue to be touted as important and necessary practices to reduce nutrient and sediment losses from agricultural fields. Although no-till soybean production has flourished in most soybean-growing areas, no-till corn acres have not kept pace.

This is especially apparent in the northern Corn Belt, where yields of no-till corn have suffered in recent years. On heavy but highly productive soils in this area, cool, wet springs have created an adverse environment for corn establishment and early growth.

In areas where cool, wet soils predominate at corn planting time, an alternative to no-till production is needed. Many growers in these areas are trying strip-tillage, also referred to as zone tillage.

In this production system, a narrow strip 6 to 8 inches wide is tilled, which provides a residue-free zone for planting and emergence. The soil surface between the tilled strips, representing over 66% of the total field area, retains its crop residue cover, and with it, its soil conservation and water quality benefits.

Strip tillage is a crop production system that combines the soil warming and drying benefits of tillage with the soil conservation benefits of no-till. In this system, a strip 6 to 8 inches wide is tilled in the fall, and the remaining inter-row space (usually 22 to 24 inches) with its crop residue cover remain undisturbed.

Tillage is usually accomplished using a shank and knife to lift the soil and disk blades to contain the loosened soil and form it into a raised ridge or berm. In most cases, fertilizer is applied during this tilling operation. In the spring, the tilled strips dry out and warm up much like a conventionally tilled field. The planter units follow these tilled strips, dropping seeds into the center of the raised berm, and often applying additional fertilizer as well.

A strip tillage implement consists of a heavy-duty toolbar with planter-like row markers and these major components:

The number of shanks on the strip tillage implement must match (or be a multiple of) the number of rows on the planter. Growers discovered early on that building a raised berm was important, primarily in order to keep the planted row from depressing to below the remaining soil surface in the spring. Researchers recommend forming about a 4-inch berm in the fall, which will settle to about 2 inches by spring.

Some growers are opting to build their own strip-tillage implements, and others are taking advantage of the increasing number of options available from farm equipment manufacturers. In some cases, especially when piloting the system, the strip-till implement may simply be an anhydrous ammonia applicator with additional components attached.

In many studies, the yield benefit depended on the growing environment, such that some locations and years were higher yielding, and others were not. A study conducted on a silt-loam soil in southern Minnesota (near Rochester) demonstrates this interaction of tillage system and year. 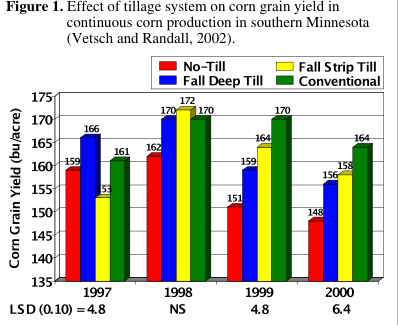 In corn after soybeans (Figure 2), tillage system differences were not significant 3 out of 4 years. In the other year, fall strip tillage was lower yielding than both conventional till and no-till. 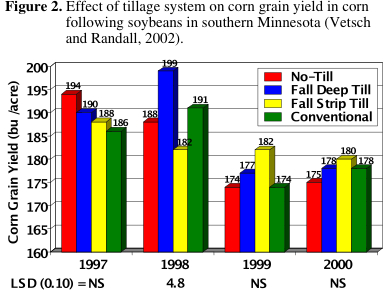 In spite of mixed yield results, many researchers and growers are still optimistic about strip tillage systems, predicting that they will prove superior over time. When cool, wet seedbed conditions predominate, strip tillage should prove advantageous to no-till.

Research has shown that soil temperatures in fall strip tillage are often 5 to 10 degrees F warmer than no-till at planting time. Under field conditions that promote good emergence and early growth, however, little or no benefit is expected.

Latitude, prevailing weather patterns, soil type and amount and type of crop residue — for example, corn vs. soybean residue — are the primary factors affecting seedbed temperature and moisture in the spring. This may explain many of the mixed research results to date.