By Frank Lessiter posted on March 3, 2022 | Posted in Nutrient Management

Sulfur plays many important roles in the growth of soybean plants, from helping with nitrogen (N) uptake to the formation of essential amino acids. As a result, it is important that growers understand how to manage sulfur for high soybean yields.

Data from the most recent annual Operational Benchmark Study conducted among No-Till Farmer readers shows 59% of respondents expect to apply sulfur to their soybean crop in 2022. This is a dramatic increase from the 31-39% who applied sulfur during each of the previous half dozen years. With higher fertilizer prices, it appears that many no-tillers are taking a closer look at how nutrients other than N, phosphorus (P) and potassium (K) can help keep no-till soybean yields at a high level. 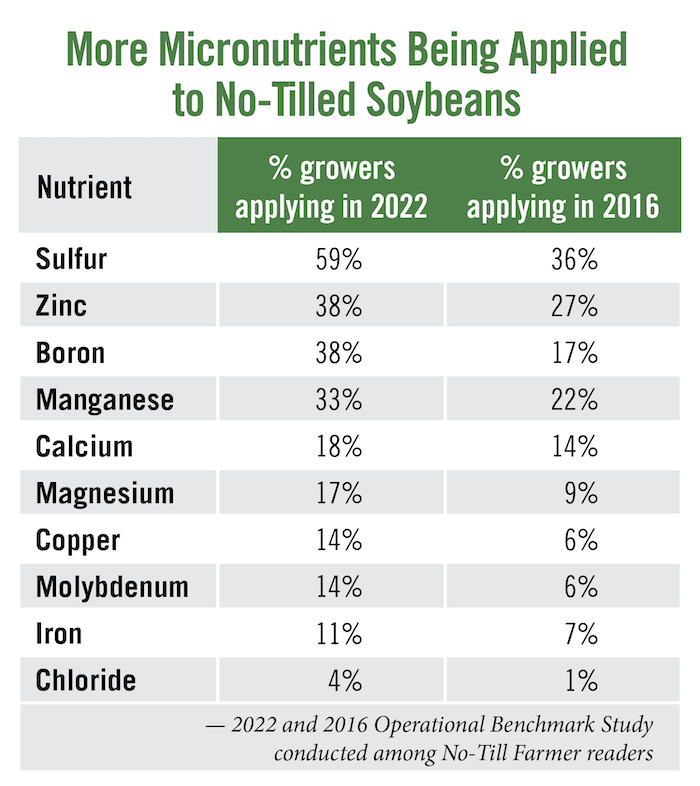 Material distributed by the United Soybean Board indicates that sulfur deficiencies, which are showing up more often in no-till soybean fields, are caused by several factors, including:

1Reduced industrial emissions due to scrubbers at coal-burning electricity plants keeping sulfur out of the environment, with current rates averaging a loss of around 5 pounds per acre.

2Higher crop yields, which remove more sulfur from the soil. It is estimated that a 70-bushel per acre soybean crop will remove 13 pounds per acre of sulfur.

3Increased use of fertilizers that don’t have any sulfur content compared to applying livestock manure that contains significant amounts of sulfur.

4Sulfur leaching out of the root zone at higher rates due to excessive rainfall or irrigation.

The importance of managing sulfur is becoming a priority for many no-tillers as it can not only impact soybean production, but also impact livestock feed quality. While sulfur is incorporated into soybean protein via the amino acids cysteine and methionine, animals cannot synthesize either of these and instead must get them from dietary sources. In fact, sulfur-containing amino acids (SAAs) are often the limiting factor when using soybean meal as animal feed.

Based on United Soybean Board material, the pros and cons of applying sulfur are full of contradictions. While sulfur is among the most mobile and variable nutrients in the soil — which makes soil testing for sulfur challenging — it has a low mobility once incorporated into plants. In addition, sulfur can interact with other nutrients applied at the same time, such as N, P, K and manganese.

Depending on temperature and moisture levels, approximately 95% of the sulfur in the soil is found in organic matter, which is broken down (mineralized) to sulfate-sulfur (SO4-S) over many years. It is the SO4-S that is absorbed by plant roots. Once in the plant, sulfur is not easily transported.

Most sulfur is transported through the plant as a hitchhiker. When plants suffer from a lack of N, they deconstruct older leaves and tissues and transport the N-containing compounds to new growth areas or for use in seed production. Since some of these compounds also contain sulfur, the sulfur is transported to seeds as well. However, if plants receive sufficient amounts of N, they normally do not transport the N-containing compounds, so the seeds may end up deficient in sulfur and thus deficient in sulfur-containing amino acids.

So, What Does the Research Say?

While recent research has started untangling some of the other sulfur dependencies, the results have not been consistent. When it comes to applying sulfur, Maryland research has shown a foliar spray on flowering soybeans resulted in improved protein quality (double the percentage of methionine and cysteine), as well as a 5-10% increase in yield, when treated with gypsum (calcium sulfate) or Epsom salts (magnesium sulfate). The Maryland researchers are also experimenting with different methods of application, such as applying a dry powder or application with a sprayer.

In Indiana, ammonium sulfate and pelletized gypsum both significantly increased yields, regardless of the soybean growth stage at which they were applied. The conclusion was that reference strips of soluble sulfur should be applied as close to planting time as possible.

Looking at the Big Picture

So what do researchers do when there are many studies, but the results disagree? They look at the big picture and conduct a meta-analysis of the results of all relevant studies. Two such analyses have recently been completed by researchers leveraging soybean checkoff dollars.

Led by Ignacio Ciampitti at Kansas State University, the first group looked at 44 unique site years in eight states over three soybean growing seasons. Their analysis found applying sulfur at planting time increases seed protein concentration. They also found a sulfur application at any time can increase SAA concentration, but only if the field’s soil already contained intermediate levels of sulfur and organic matter. Even so, the gains were highly variable and site specific, indicating there may be other variables at work.

Locke found the largest increase in soybean seed protein resulted from sulfur application. In fact, applying sulfur increased protein and oil concentrations as well as yield. However, rainfall was high in many of the studies, which possibly washed away existing sulfur, making the added sulfur even more valuable.

There’s More To Soil Fertility Than N, P And K