Dr. Hugh Hammond Bennett (1881-1960) is credited for championing the soil conservation movement in the U.S. and worldwide. Following his dramatic testimony before Congress in 1934, he was named head of the newly formed Soil Conservation Service (now NRCS) of the USDA and served in that role in the 1930s through his retirement in 1951. 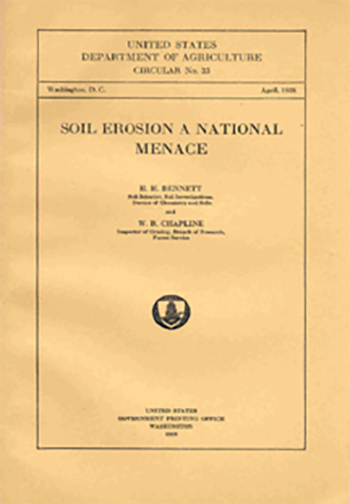 “Out of the long list of nature's gifts to man, none is perhaps so utterly essential to human life as soil.”

“Permanent soil conservation is an essential first step toward solution of the farm problem.”

“I consider the soil conservation districts movement one of the most important developments in the whole history of agriculture.”

“Soil conservation is probably the youngest of all the agricultural sciences.”

“And, usually, it takes no more labor or machinery to carry on conservation farming than it does to farm the wasteful way — without consideration of conservation needs.”

“... Land must be nurtured; not plundered and wasted.”

“Many farmers — most farmers, and that means millions — need some technical help in making the change to this more efficient, easier, and more productive type of farming, and they need also moral support and encouragement.”

“The writer, after 24 years spent in studying the soils of the U.S., is of the opinion that soil erosion is the biggest problem confronting the farmers of the Nation over a tremendous part of its agricultural lands.”

“What would be the feeling of this Nation should a foreign nation suddenly enter the U.S. and destroy 90,000 acres of land, as erosion has been allowed to do in a single county?”

From The Archives: No-Till Gets More Attention Among Soil Conservationists

From The Archives: No-Till Boosts Income While Saving Soil