Deploy Cover Crops to Drop Your Herbicide Use

Steve Groff shares how planting green into a thick, tall stand of cover crops can help keep troublesome weeds under control while significantly reducing herbicide use.

What would you do if you couldn’t use glyphosate?

That was the question posed to Steve Groff by a French farmer he was visiting.

It wasn’t a scenario Groff had seriously pondered. Despite his long commitment to no-till, his immediate thought was that he might have to do some tillage.

While it may seem like an interesting thought experiment for some, for others it could one day be reality. Paraquat is already illegal in the European Union, and some European countries are beginning to ban glyphosate, too.

While glyphosate may remain legal in the U.S., it is losing its effectiveness, with herbicide resistance becoming a growing global problem. And it’s pushing farmers to find alternative ways to control weeds.

One effective strategy? Cover crops. Especially when paired with a roller-crimper.

In fact, Groff turned to roller-crimping cover crops in the mid 1990s on his farm in Holtwood, Pa., to cut back on Roundup, which cost $40-50 per gallon at the time.

Whatever the reason a no-tiller may have for wanting to move away from herbicides or lessen their reliance on them, a good cover crop practice is likely part of the solution. Groff shares some real-life examples of how effective this practice can be and offers practicable tips on how to make it a successful strategy for your farm.

To combat weeds, we first need to understand why they’re present in the first place.

“Weeds are really nature’s way of trying to cover the soil,” Groff says. “The soil is meant to be covered and we fight that all the time. We need to think about partnering with nature rather than controlling it.”

Instead of using tools to control nature, Groff is trying to mimic nature by having a diversity of plants — both cash and cover crops — and keeping the soil covered at all times. 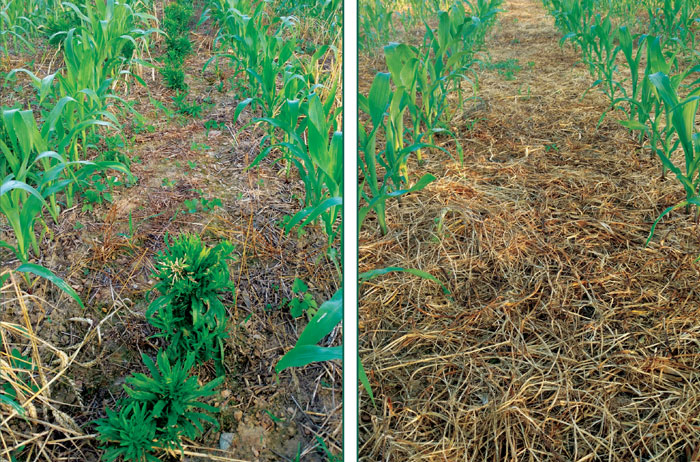 COVERS CONTROL RESISTANT WEEDS. Steve Groff did an experiment comparing bare soil to cover cropped plots, replicated four times on his farm in Holtwood, Pa. While herbicide-resistant marestail emerged between the corn rows where the soil was left bare (L), the cover crops’ residue kept the weed under control (R).

Groff acknowledges that his production is a little different from farmers in the Corn Belt, as he grows vegetables and small grains in addition to corn and soybean on 200 acres. But he’s seen it work for large, Midwestern farms, too. Iowa no-tiller Jack Boyer, for example, sent him a photo of a soybean field. Boyer previously had plots comparing a cereal rye cover crop to no cover crop. Although the entire field was sprayed twice with Cobra, waterhemp still emerged in the plots that were left bare.

But how much do cover crops reduce herbicide use?

Groff shared another example where he used a mix of five or six different species, including radishes, hairy vetch, crimson clover and triticale. With the use of a roller-crimper, Groff only had to spray just one pint of glyphosate and a half pint of 2,4-D.

“If you look closely, you can see a weed or two,” Groff says. “I don’t like weeds, but my fields don’t have to be perfect. It’s not bad weed control with no residual herbicides.”

How can other no-tillers use cover crops to reduce herbicide use on their farms? Groff says you need to know why you want to reduce them in the first place, as it will help you keep the right mindset in making this work. 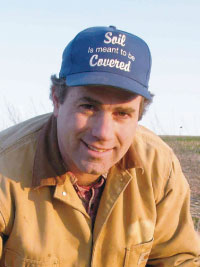 “The soil is meant to be covered...We need to think about partnering with nature rather than controlling it…” – Steve Groff

“There’s a difference between saying, ‘Well, I’m going to give this a try,’ vs. ‘I’m going to make this work,’” he says. “Which do you think has the best chance to succeed?”

When you have a strong why, you’re motivated to go from just trying to make a practice work to being committed to figuring it out.

If cutting herbicide rates is the primary objective of your cover cropping, Groff says, then the first step to achieving that is establishing a good cover crop stand. That depends on three factors: seeding method, seeding rate and species selection.

While Groff has seen some 100% success rates with broadcasting cover crops, he’s also seen some very sporadic results from it. Therefore, he recommends drilling the cover crop.

But using the right seeding rate isn’t so black and white. Groff says it depends on your seeding date, which can be as early as September or as late as November. Your soil fertility and nutrient plans also play a role. If your fields have high fertility or you plan to spread manure on them, you should aim for a lower seeding rate, particularly with cereal rye.

Steve Groff is not a fan of handing out cover crop prescriptions because no-tillers need to know what works on their farms. However, he understands everyone needs a place to start, so he provided the following suggested rates for a few simple cover crop mixes:

When used in a mix

“One of the problems with a high seeding rate and high fertility is your cereal rye grows up and then blows down,” Groff explains. “Then it’s really difficult to plant into. It might be good for weed suppression, but you could have the best planter in the world and it might be too difficult to plant through. Especially if you’re new to this.”

Which species to seed will also vary by operation. Cereal rye is a popular choice, and will not only provide good biomass but help suppress weeds through allelopathy.

“It really does have a chemical in there that helps impede the germination of small-seeded broadleaves, which are most of our resistant weeds,” Groff says.

Growers also need to consider the maturity of their cover crop selections. Groff shared a photo he took of a cover crop plot taken in South Africa. The field was in cereal rye. But the rye on one side of the field was significantly shorter than the rye on the other side. Why? They were different selections of the species and their maturities were about one month apart.

“If you’re going for weed control, which variety should you use?” Groff asks. “It should be the one that grew taller. It’s more advanced. It grew faster. It’s more mature. So be a little bit careful when you pick your cover crop species as to which ones are going to work best for your weed control.”

He also advises having some diversity in your cover crop to attract beneficial insects, which will eat weed seeds.

And don’t be afraid to include cover crops that will winterkill. Groff received a photo from an Indiana farmer who seeded a field with just radishes and they grew very well in the fall. The farmer told Groff later that he didn’t need any burndown herbicide on those areas.

“Maybe you can limit or reduce some of your burndown herbicide if you’ve got a great winterkilled cover crop,” Groff says.

Finally, he recommends starting this practice on your cleaner fields before implementing it on the weediest ones.

While winterkilled covers can help control weeds, the best way to get good suppression is to let the covers grow longer by planting green.

In the 2019-20 Cover Crop Survey conducted by the Sustainable Agriculture Research and Education (SARE) program and the Conservation Technology Information Center (CTIC), cover crop users were asked what impact planting green had on pest issues. Seventy percent of respondents indicated weed control was better when they plant green.

SELECT FOR MATURITY. While this entire field is cereal rye, the left side is clearly shorter than the right. Steve Groff says this is due to having planted different varieties with about a month’s difference in maturity. If using cover crops to control weeds, you’ll want to opt for the early maturing cover.

“How does that work though?” Groff says. “I think a lot of it has to do with the suppression that comes from just the smothering. The ground is covered. It doesn’t allow the weeds to germinate.”

The goal is to have such a thick stand of cover crop it completely blocks sunlight from reaching the ground. That means it needs to grow to a good height.

“If you’re really serious about weed control, let it grow 6 feet tall,” he says. “I’m not suggesting you wait until everything’s 6 feet tall before you start planting, but you’ve got to start with a field or two.”

For those new to planting green, Groff says the easiest way to get started is by planting soybeans green into cereal rye. And he recommends lifting the row cleaners when planting.

“If the soil temperature is rising, it’s getting into the mid to upper fifties, why bother cleaning the row off?” he asks. “Because that can open it up for weeds to emerge in the row.”

After planting green, you’ll need to terminate the cover crops. To reduce the use of herbicides, that likely means either using a roller-crimper or a mower.

Groff has been roller-crimping for 25 years with an implement he built that runs behind his tractor. But some options, like Dawn’s ZRX rollers, can be placed on the front of the planter, so growers can eliminate an additional pass through their fields.

Can you rely on roller-crimping alone and completely skip using herbicides? Groff says it can be done. But it’s probably not going to work consistently in every planting sequence, simply because you have to let the cover crop grow, and there are some limitations to that.

The last key to making this all work, Groff says, is to find mentors. Over the years, no-tillers like Rolf Derpsch, Dwayne Beck, Frederick Thomas and the Menoken Farm have influenced Groff and helped him along the way.

“I’m going to be very forthright in that, you need to have mentors, someone you can call and talk to,” Groff says. “That’s why we have conferences because that’s where we learn and get to know each other and ultimately be better farmers.”