The livelihoods of millions of Uganda citizens is rooted in the highlands — the mountainous or elevated regions of the East African country. Scattered along the eastern and western borders, the highlands of Uganda are home to about 40% of the country’s 46 million people.

These regions play a significant role in agriculture, which is the main source of income for many Ugandans, including for 70% of working women. These regions are also recognized as one of the key hotspots where land degradation, due to soil erosion, is rampant, according to a recent news release from the International Atomic Energy Agency  (IAEA).

A recent study completed by the National Agricultural Research Laboratories (NARL) in the capital Kampala assessed erosion rates in the highlands using nuclear techniques to assess soil samples and inform policy makers, farmers and other stakeholders on actions to take to reverse or at least reduce land degradation.

Analyzing caesium-137 (Cs-137) radionuclide in soil which can serve as an erosion tracer. The study included sampling slope transects across terraced fields in the Rubanda District in the southwestern highlands.

The results revealed that most of the terraces were eroded — having lost about 5 inches of topsoil in the last 60 years — indicating that the effects of traditional terracing techniques to conserve soil on steep slopes of Uganda highlands are insufficient.

Previously, researchers from Uganda, Rwanda and China evaluated soil erosion in the country using the Universal Soil Loss Equation (USLE), which suggested that the mean rate of soil erosion in the highlands is between 4 and 40 tons per acre per year. The estimated rates lacked validation that needed to be obtained by field measurements.

“Only four soil profiles were stable — showing neither erosion nor deposition — and six profiles showed deposition, where sediments from erosion have accumulated, altering the shape of the land,” Fulajtar says.

The remaining 31 profiles were eroded, with a maximum erosion rate averaging 30 tons per acre each year. The field measurements obtained with Cs-137 supported estimates calculated by the USLE.

Since the early 1960s — when Cs-137 was released into the atmosphere from nuclear weapons tests and deposited on the Earth’s surface — until the time of sampling in 2018, more than 60% of the cultivated topsoil layer had been lost to erosion.

Emil Fulajtar, a soil scientist at the Joint FAO/IAEA Centre of Nuclear Techniques in Food and Agriculture, says additional soil conservation measures are needed. Three promising approaches are no-till; switching to crops with higher soil-conserving efficiency, such as wheat rather than sorghum, peas or beans; and erosion ditches to stop runoff and the displacement of sediments.

Going with a Living Mulch

His aim is to keep a low-growing clover in the soil throughout his rotation to reduce tillage, keep the soil covered, smother weeds, feed soil biology and “encourage multi-species interaction with a harvestable crop,” he told Direct Diller magazine.

“We’ve grown it for 2 years now and, to date, the crop has outcompeted it — which gives us some confidence that the mix will do it’s intended job,” he tells the magazine. “It would be great to get more species into the mix, but I’m keen to keep it simple at the moment.”

Pawsey is also direct drilling some crops into the living mulch that is spread broadly across the field, “but having been under-sowing leys and fertility builders into our soils for over 20 years I do have concerns about this approach,” he adds.

“In my experience, clovers take a huge amount of water out of the soil, and although you may get away with allowing the white clover to run free over a number of years in the damp West, in the drier East we have suffered considerable yield loss through those leys over-competing with our cash crops for water.

“I feel that we will have to contain the clover to lessen that effect, as well as finding a mechanism to control its lateral growth and mineralize a small amount of nutrients to get an autumn or spring crop going.” 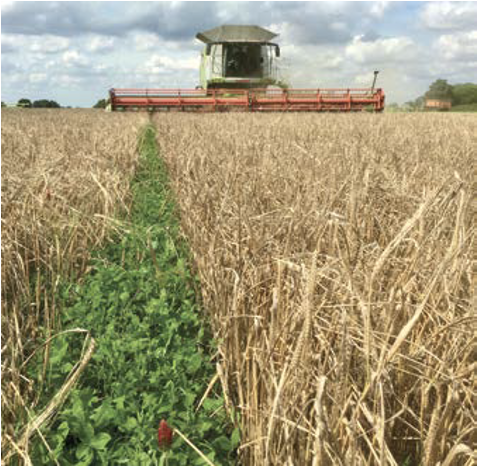 A picture of the living much U.K. grower John Pawsey leaves in his fields to smother weeds, stimulate soil biology and protect against erosion.

Conservation farming practices are starting to make a difference in Zimbabwe, which is working harder toward addressing food security issues.

An article in the Africa American Voice describes a program called “Pfumvudza” and it trains farmers to use small plots that retain water easily and easier to manage than larger plots.

After several years of poor rains, Pfumvudza was rolled out to address low levels of farm production and improve maize, sorghum and millet yields and reduce farmer workloads.

Along with smaller plots, reducing soil disturbance is another program tenet. Erasmus Moyo, a small-scale farmer in Bulawayo, says his area is prone to drought but this year too much rain came and he planted corn, sorghum and beans.

He had to promise to minimize disturbing the soil. “I would only dig a hole where I would plant seeds and leave the rest of the land undisturbed,” he says. “The concept really paid dividends, and the issue of food shortage is now a thing of the past to my family.”

Signs of Rill Erosion in No-Till and Tilled Fields

Health of the World Depends on Farmers’ Investment in Soil