Pictured Above: UNDERGROUND ACTION. North Dakota no-tiller Paul Overby says one thing he looks at when evaluating soil health is the roots of his crops. “Underground is where the action is, building up that soil,” he says.

WHEN PAUL OVERBY returned home to the family farm in Wolford, N.D., in 1993 after a 12-year career in politics and non-profit fundraising, he was immediately presented with a riddle. The year before, Overby’s father had had his best crop ever, achieving 80-bushel barley and 45-bushel wheat, on average, in a wheat/barley/flax rotation.

“How did he get those extra bushels when he hadn’t fertilized for them?” Overby asks. “I figured it had to be something in the soil.”

Hearing various speakers over the years led Overby to realize what that “something” in the soil was -— the microbiology.

Getting Regenerative. No-tilling since 2005, Overby says the top 6 inches of soil on his farm have long been very absorptive, but he discovered early on that the crop roots weren’t going deep enough to dig channels that would allow water to keep moving down, so water was getting trapped on top of the field.

“I had pudding on top of my soil,” he says, adding that it was his first sign that he really needed to adopt more soil health practices. That realization led him to North Dakota rancher Gabe Brown and the regenerative ag movement. “Gabe explained to me that if you’re going to no-till, you should work on your soil biology first,” he says.

Overby says these principles are a good starting point, but he likes the following definition of regenerative ag put forward by Terra Genesis International, a permaculture design and education company based in Idaho:

Overby says he prefers this definition because “it expands the consideration of regenerative agriculture beyond me and my farm to the world which I share with others.”

Along the way, Overby began diversifying by adding new crops such as oats, yellow peas, canola, soybeans and sunflowers to the operation.

“We took 45 acres out of production that we were losing money on, and made it into something valuable…” – Paul Overby

Overby added cover crops to his oat and wheat crops in 2019, seeding clover with both crops. “I didn’t get the greatest stand, because I probably planted too deep,” he says. “I also tried seeding cover crops into standing wheat.”

One important lesson Overby says he’s learned is not to judge cover crops by what they look like on the surface. “What’s going on with the roots?” he asks. “Underground is where the action is, building up that soil.”

Adding rotational grazing was another tactic for Overby. He rented out his grazing acres to his nephew, since he doesn’t have his own livestock.

“I manage it for him to make sure we can rotate through,” he says. “We’re putting the non-productive soil into grass, which the neighbor hays and pays me for it. We took 45 acres out of production that we were losing money on and made it into something valuable: hay land for my neighbor.”

In 2019, Overby got involved in the Regenerative Ag program with General Mills. He says growers should keep in mind the end customer and not necessarily the elevator that buys the crop. 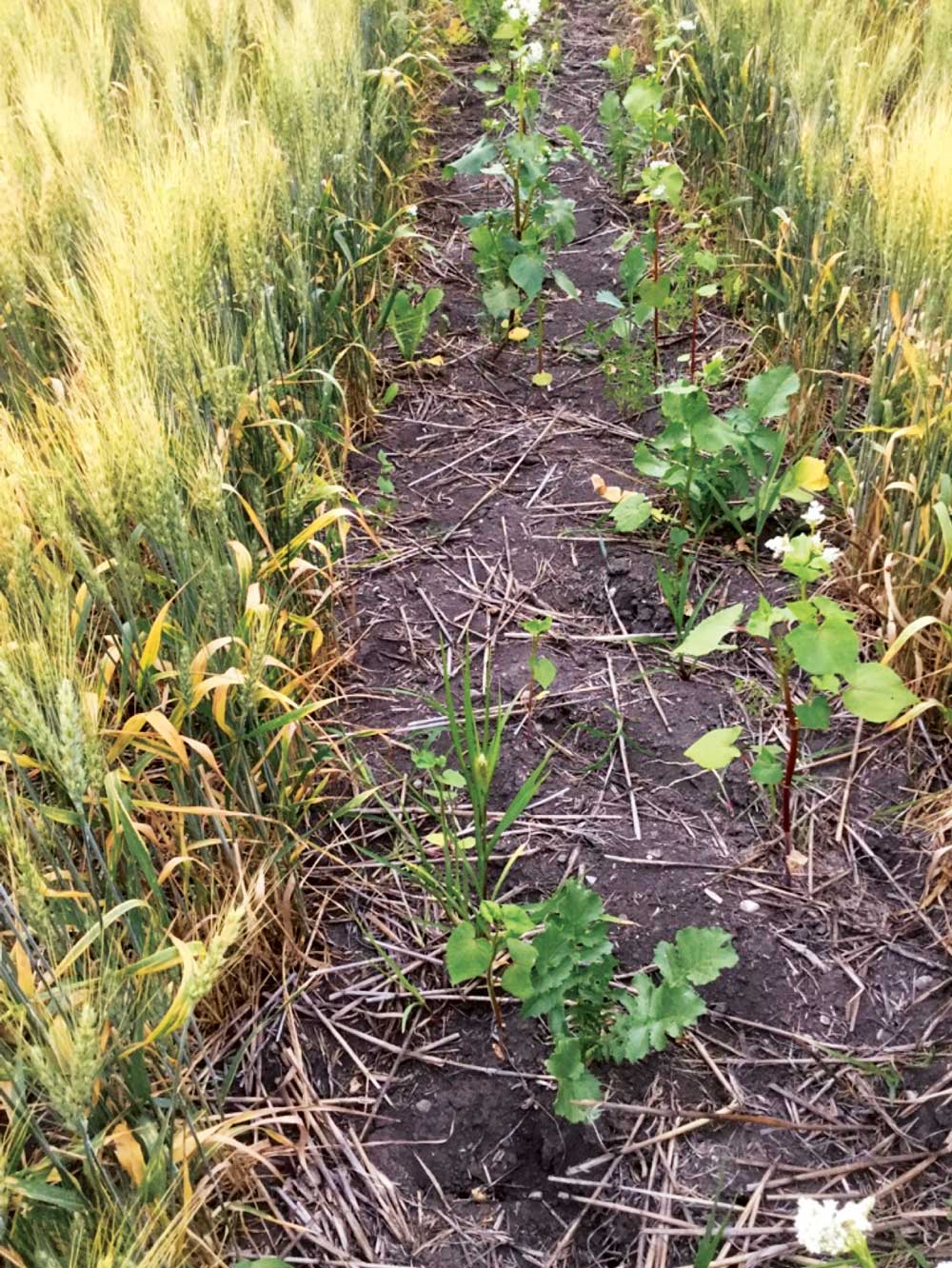 “What does the food processing industry need from us in order to provide a quality product to the end consumer?” he asks. “Those things all come into the mindset.”

In addition, he says land should be productive so it can feed people 100 years in the future. “At the rate we’re losing topsoil, we’re not going to be doing that if we don’t change the way we farm, not only in North America, but across the globe,” he says.

North Dakota has wind erosion problems, with a lot of topsoil being lost.

“The Red River Valley has lost a foot of topsoil,” Overby says. “Most of that is from wind erosion. With no-till, we’re addressing some of that.”

He’s observed the topsoil on his farm getting deeper by the inch, thanks to earthworms and other soil biology.

“In 2009-2011, we developed a whole series of problems,” he says. “It was very, very wet. Dwayne Beck said at a meeting that we have a water management problem.”

Beck suggested changing crop rotations from wheat, which doesn’t use much water, to crops like corn and soybeans, so more water would be used.

“Some people try to use tillage and glyphosate to manage their prevent plant acres,” Overby says. “That doesn’t work. You’ve got to use the water up.”

The land on Overby’s farm is currently absorbing 2 inches of water in less than a minute, according to water infiltration tests.

“Regenerative ag is about capturing water to recharge my whole system,” he says. “We’re looking at the ability to recharge our entire aquifer system by capturing moisture instead of pushing it downstream. Soil structure allows you to do that.

“No-tilling alone doesn’t necessarily build up carbon in your soil. Regenerative ag is not a sheet that you go down and check things off. It’s about adaptation of principles.”

Since 2004, Overby has used satellite imagery to help manage fields by zone, which he says was very intuitive.

“The technology was just coming along,” Overby says. “Using Satshot Imagery and FarmWorks software, we were able to break out fields into zones and start applying nitrogen (N) via anhydrous application.”

By 2006, Overby had developed multiple zones on the farm, which he believes should be a fundamental building block for regenerative agriculture.

“You’re going to need to manage and balance your inputs based on where they’re needed in the field,” he says. “Fertility and planting populations are big pieces of that.”

Overby samples almost all of his zones annually, amounting to some 40-50 sample cores per field that are about 2 feet deep. He does his own soil testing.

“If I don’t test what I’ve done in my wheat crop, how do I know if I put the right management in my wheat crop?” he asks. “If I wait until after my soybeans are done, the crop will blow off excess N. By the time I get to soil testing my soybean crop, I’m not learning anything.”

Overby says he doesn’t apply much fungicide, partially because of the economics, but also because of resistance issues.

“I need fungicides from time to time, but if we overuse them, pretty soon, science is possibly going to run out of solutions,” he says. “If we can use them when we need them but figure out how to use management to avoid using them as much as possible, that’s what I want to be able to do.”

He’s also looking at the soil to guide herbicide applications that are soil dependent for activation. “They need to be applied in the proper rates for the soil type,” Overby says.

As with every other decision, his choices are guided by how the pieces fit into the bigger picture. “It’s looking at the whole operation, not just the soil health, but the entire ecological system.”

[Podcast] Jonathan Lundgren on No-Till and the Regenerative Ag Movement