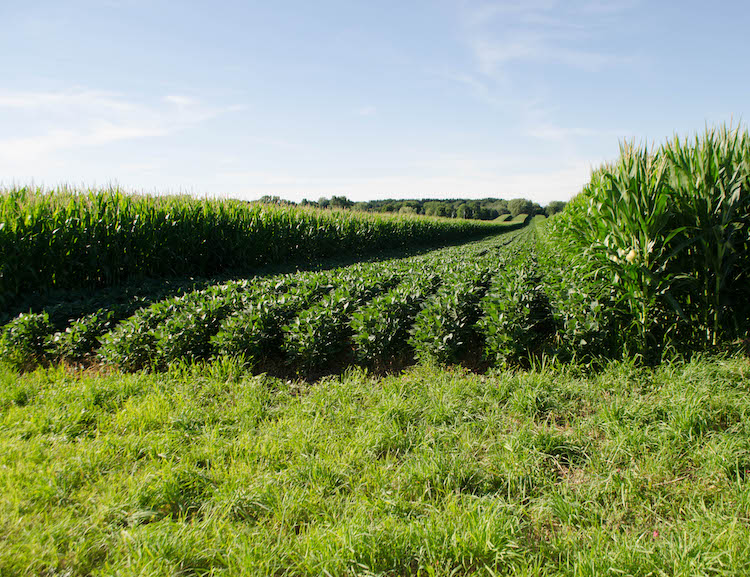 Pictured Above: SOLAR CORRIDOR. Strips of soybeans alternate with strips of corn on Marty Weiss’ farm in Beaver Dam, Wis. “My goal with strip-cropping is to capture sunlight, which leads to more carbon capture and soil organic matter,” says Weiss

A LONG-TIME strip-tiller, Marty Weiss has been conservation-minded for years. But he’s taken inspiration from the recent widespread focus on soil health and in the past few years tackled several new practices, including no-till, strip cropping, interseeding cover crops in both 30-inch and 60-inch corn, planting green and even seeding covers for regenerative grazing.

Co-chair of Wisconsin’s Dodge County Farmers for Healthy Soils & Healthy Waters, Weiss’ land hasn’t seen a plow since the early- to mid-1990s. He’s been strip-tilling with zone tillage on the planter, then a strip-till bar since about 2004 and this year (2020) went 100% no-till.

Traditionally, strip cropping has been used in areas with rolling ground to combat soil erosion. In those situations, farmers usually alternate cash crops with cover crops, such as closely-sown small grains or forages.

Weiss took a slightly different approach by alternating corn and soybeans in strips of 8 30-inch rows apiece, not to control erosion but to capture sunlight and sequester carbon in search of better soil health and reduced inputs.

“Every 1% of organic matter contains 1,000 pounds of nitrogen (N), of which approximately 20 pounds are plant-available, 100 pounds…

Premium content is for our Digital-only and Premium subscribers. A Print-only subscription doesn't qualify. Please purchase/upgrade a subscription with the Digital product to get access to all No-Till Farmer content and archives online. Learn more about the different versions and what is included.
KEYWORDS 60-inch corn grazing cover crops interseeding Marty Weiss regenerative agriculture strip cropping waterhemp

Carbon is King — and Rising Fast — with Constant Cropping