Another ‘You Can’t Do That’ No-Till Story

Over the years I’ve heard lots of stories from farmers recalling when neighbors or other so-called experts heard them utter the word “no-till” and they would say, “You can’t do that!”

But Greg Schlemmer has proved his doubters wrong as he’s been no-tilling irrigated sugarbeets south of Billings, Mont., for the last 5 years. He was already no-tilling malting barley into silage corn stubble and came across a field that he knew would be a “cloddy mess” if he tilled it.

So he bought a 12-row John Deere 7300 MaxEmerge 2 planter, added Yetter floating row cleaners and a popup fertilizer system and started no-tilling sugarbeets in 24-inch rows. In his heavy clay soils he had to put bags of concrete in his insecticide boxes to increase down force for the seed, planted at 1½  to 1¾ inches deep, but that’s no longer necessary as his farm ground has mellowed out.

Schlemmer says he’s been topping area farmers in tonnage per acre the last several years, and sugar content of the beets is always 1-2% higher. Even though his beets are slower to emerge in May than surrounding farms, he attributes the improved production to cooler soil temperatures that are promoting root growth.

“In the middle of June when the ground is dried up, I still have moisture left. And when it’s hot and you need to irrigate but the plants are too small to do it, mine keep growing and surpass theirs,” Schlemmer says of farms in his area where sugarbeets aren’t no-tilled.

Schlemmer pawed through one of his no-tilled fields Aug. 16 and showed me the rich soil structure he’s attained through his no-till practices, rather than working the soil over in 7-8 trips each year. He then showed me what happened with a neighboring field after a 6-inch rain fell last May. He estimates the farmer lost at least half an inch of soil from the field just after one storm.

“On our ground we drove around while it was raining and looked out with a spotlight and my fields looked like we were just irrigating. The ditch was full but that was about it,” he says. “Then we looked at my neighbor’s field and the water was coming across the road and it was up to bottom of the door on my pickup.” 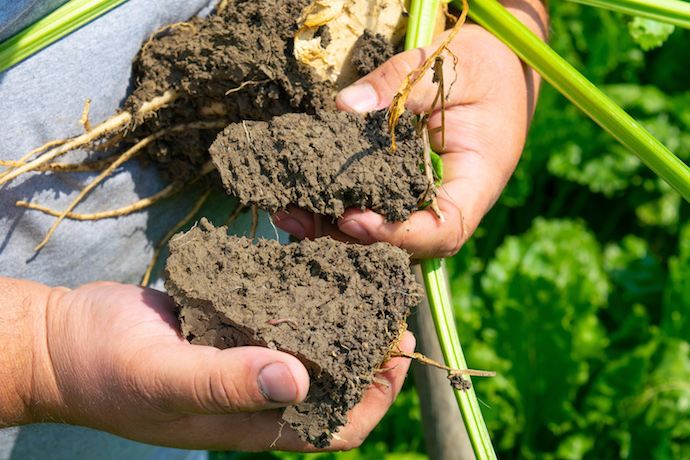 You Can't Buy a Miracle in a Jug

Another Reason To Choose No-Till