Some (Little) Rain Falls on Oklahoma

We got rain!!! I had over an inch and half in my gage last week! Some folks in Southern Oklahoma got more than that!  Great news, at least in Oklahoma, right?

Leave it to our good friends at the Oklahoma MESONET to come up with stats showing us how, even with last week’s rain, how dry it is in all of Oklahoma … 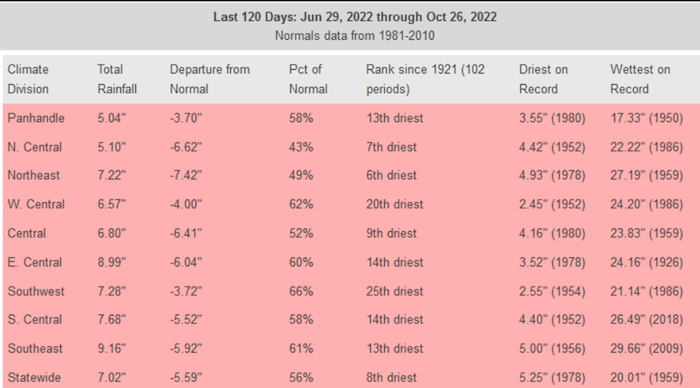 And, as they so “helpfully” point out, the drought actually started much earlier than June 29 of this year. They showed us the stats for the last 365 days … 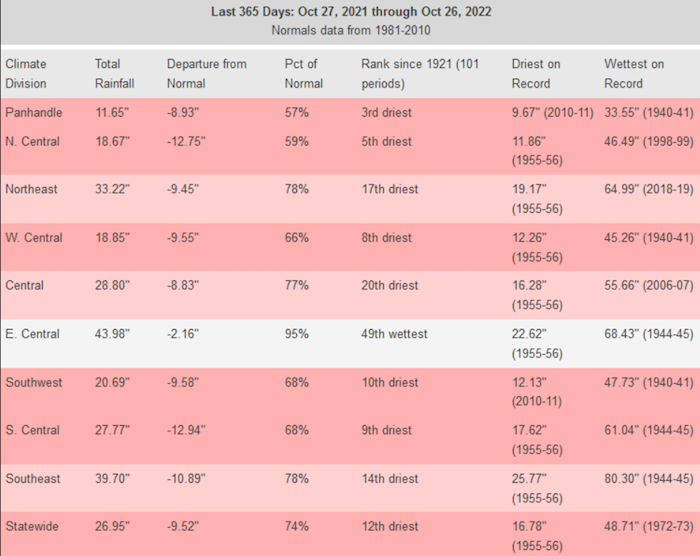 And while I am still happy for the rain (even though the MESONET folks remind me how behind we are here in Oklahoma on moisture) I take a look at the U.S. Drought Monitor and see just how bad it still is, especially in Northern Oklahoma and Southern Kansas—remember, the darker the color, the worse the drought conditions. 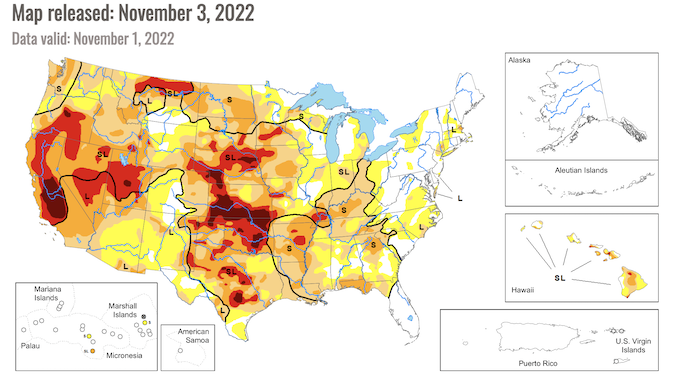 That is not a good look.

Still, conditions in Texas are better than they were earlier this summer and the folks in parts of Southwest Oklahoma have seen an improvement.   Even with that little bit of positive news we have to remember that with the onset of a “triple dip” La Nina this drought could very well just be getting started.

Successful Farming Magazine put out a drought story just last week titled “U.S. IS DRIEST IN A DECADE, AS DROUGHT MOVES EASTWARD.”  This article discussed how we are in for a “triple dip” La Nina for the first time since 2012.   We all remember 2012, right?

The story went on to say that an article penned by Rippey for the Journal Weather and Climate Extremes said that the 2012 drought was a “once-in-a-generation crop calamity” that grew out of back-to-back La Niña weather patterns and caused $30 billion in damages, mostly agricultural.  La Niña weather patterns typically bring drier-than-usual weather to the U.S. southern tier. The summer of 2012 was the second hottest in U.S. history, trailing only 1936, and the driest since 1988, another drought year.

“More than one-quarter of the corn and sorghum was lost to the drought,” wrote Rippey. More than three-fourths of the U.S. cattle herd and two-thirds of hay territory was in drought.

The article went on to say that a week ago, NOAA forecasters said the United States would go through its third La Niña winter in a row, suggesting little relief for winter wheat or low water on the Mississippi.

The story quoted Jon Gottschalck of NOAA’s Climate Prediction Center as saying “Drought conditions are now present across approximately 59% of the country, but parts of the western United States and southern Great Plains will continue to be the hardest hit this winter. With the La Niña climate pattern still in place, drought conditions also may expand to the Gulf Coast.”

Again, as a reminder, if you have not checked in with your local USDA Service Center to see what kind of drought assistance is available, you need to do so!   Not only is there help available from USDA (we wrote about some of this in an earlier blog ), but some states have taken action on drought assistance too (Oklahoma for example, has engaged its emergency drought fund).   You also can check out a couple of videos we did a while back with some of the folks at NRCS with some tips on dealing with dry conditions here and here.

Clay Pope is a farmer and rancher from Loyal, Okla., and is working as a consultant to the USDA Southern Plains Climate Hub. He also serves on as a board member of the Oklahoma Wheat Growers Assn. He is former executive director of the Oklahoma Assn. of Conservation Districts.

Soybeans May Be Good Alternative Summer Crop for Some Oklahoma Growers

Rain, Thawing Snow On Frozen Soil Can Cause Rill Erosion