Next month, the Chicago Cubs and Cincinnati Reds will “emerge from the cornstalks” in Dyersville, Iowa for Major League Baseball’s now-annual “Field of Dreams” game.

I recently made my fourth trip to the Dyersville farm, this time with my oldest son, Drew, weeks before his year-long U.S. Army deployment to Kuwait (Many of you will know Drew from his college-break gig assisting with AV at the National No-Tillage Conferences in Indianapolis and St. Louis.)

Then, last Monday’s rain-canceled fireworks resulted in a late-night screening of the landmark film with my middle son, 17-year-old  Owen. An ag economics deep dive soon ensued with the high-schooler, who was fresh off his A.P. Microeconomics exam. And it evolved to an interesting look at the vast differences in corn yields, pricing and land rents over the last 34 years since the film was released. Yikes, was it really 34 years ago? 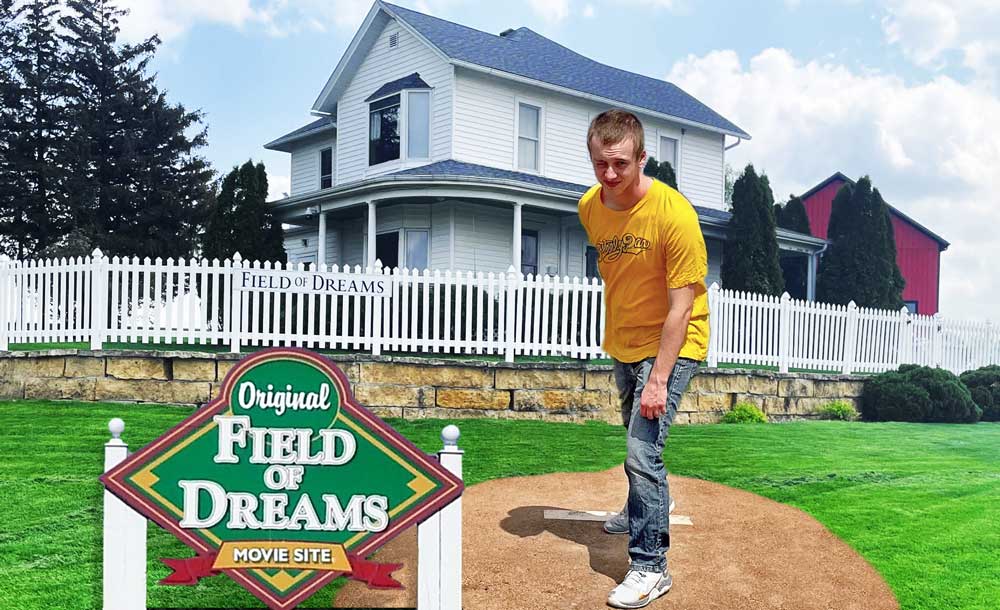 TAKING THE MOUND. U.S. Army Specialist Drew Lessiter accompanied his dad on a last-second field trip to eastern Iowa, right before he left on a year-long deployment to Kuwait.

In the movie, Ray Kinsella’s (Kevin Costner) decision to plow under his corn – at about V12 no less – to create a baseball diamond was continually cited as THE reason the farm was on the brink of insolvency. But our dinner table analysis last night showed there must have been additional reasons why the Kinsellas were in such dire financial straits – before Ray’s diversions to Boston’s Fenway Park and Chisholm, Minn. For starters, it was stated in the movie that the Kinsella farmland was mortgaged at more than $2,000 per acre. That may have been an early sign of trouble for Ray as records show Dubuque County farmland was valued at $1,298 in 1989, years after he purchased the farm.

And even if Kinsella’s baseball field was generously sized at 4.5 acres, our top of the napkin analysis of his gross income loss should have been about $1,215 in total for the first season, not exactly a figure you’d expect to sink an entire farm enterprise. We arrive at this figure based on 1989 figures of 118 bu./acre corn yields and corn prices at $2.29 per bushel. So while his opportunistic brother-in-law continued to harp on the fact that the baseball field was the sole cause of the pending insolvency, Kinsella’s problems had to have been much deeper than that.

We do know he hadn’t yet given no-till a chance.

Field of Dreams (and well, at least for me, Revenge of the Nerds and Stripes too) holds a special place within our family. Both my parents knew a 6-year-old named Timothy Busfield (whose award-winning acting career included the role of Kinsella’s opportunistic brother-in-law). Busfield grew up next door from my mom in East Lansing, Mich., and the lad was part of her regular babysitting business. He was known to ring the doorbell with a request for “Pammie to come out and play,” even though she was 14 years older and in college at the time.

Once, when explaining his love of baseball while promoting Field of Dreams on The Tonight Show, Busfield cited the influence of my ball-playing uncle, John Fuzak and gave him a personal shoutout heard by a friend in the studio audience. Uncle John (who was drafted by the San Francisco Giants after college but chose law school instead) spent countless hours teaching Busfield and his brother Buck how to hit in the mid-1960s. Busfield was a decent ballplayer in his own right, even suiting up at East Tennessee State University and later playing semi-pro ball. Busfield would get to take the field as a first baseman in the 1994 movie, Little Big League.

As mentioned, I’ve been to the farm/field 4 times now, usually en route to farm, manufacturer or dealer visits in the area, and often with new hires. My dad, Frank, got to experience something there I haven’t … a “pick up” game was taking place where a kind hurler invited him to grab a bat and step into the box. As he tells it, Dad promptly lined the pitch to the outfield before trotting the bases.

As for me, like Moonlight Graham, I’m still awaiting my first official at-bat...

As for Busfield, I'm a bigger fan now than when I started penning this piece. On the same week he's opening a Tom Hanks play in New York (and still struggling with the process of memorizing his lines), he returned my call and shared 20 minutes of memories of my grandparents, Mom and Uncle John and Aunt Susie, including a hilarious tale I'd never before heard.

Fast forward to today. Dubuque County land now exceeds $10,000 per acre, corn yields have improved by another 100 bu./acre and farmers can sell their corn for $7.50 per bushel.

At these numbers, it may have been a lot more difficult for Ray to have answered the call of the voices in his head.