Less than 5% of U.S. Soybeans are Double-Cropped

A few months ago, I tried to track down acreage data regarding the number of U.S. double-cropped soybeans produced each year. After all, I’d guess most of the soybeans double-cropped after wheat are no-tilled in order to get the second cash crop planted as soon as possible without sacrificing available field moisture with intensive tillage.

So much to my surprise, a report from ASA arrived in my email inbox around the first of June. Authored by ASA chief economist Scott Gerlt, his analysis of government data indicates less than 5% of  U.S. soybeans are currently being double-cropped each year. This double-cropped soybean acreage has continued to decline over the past decade, dropping from around 10% of the total in 2013 despite the continued growth in no-till soybean production.

The ASA article shown here offers an in-depth analysis of the current double-crop soybean situation, concerns with on-going crop insurance coverage and the latest ideas from the federal government on promoting production of double-cropped soybeans.

More Double-Cropped Soybeans on the Way

With growers enjoying higher prices for both wheat and soybeans, more wheat will likely be seeded this fall with the anticipation that double-crop soybeans will follow next summer.

Data gathered from 400 large-scale growers who participated in the Purdue University Ag Economy Barometer survey in early June indicated that nearly 30% with experience in growing wheat and soybeans expect to seed more wheat this fall.

“The shift toward increasing wheat acreage is likely the result of the expected profitability improvement of the wheat/double-crop soybean rotation,” say the project’s authors, James Mintert and Michael Langemeier.

With current wheat and soybean prices, University of Illinois ag economists project that double-cropped wheat and soybeans grown on central Illinois ground can earn $547 per acre as an operator and land return. This compares with single-crop returns of $472 for corn, $425 for soybeans and only $228 for wheat.

Approximately 39% of the respondents to Purdue’s Ag Economy Barometer poll said they have utilized a wheat/double-crop soybean crop rotation in the past. Some 28% of the producers who have experience with a wheat/double-crop soybean rotation plan to increase the amount of cropland devoted to this rotation by seeding more wheat in the fall of 2022 for harvest during the summer of 2023.

In mid-May, Pres. Joe Biden’s administration announced plans to increase by 50% the number of counties eligible for double-cropping insurance. This means expanding double-crop insurance to 681 additional counties, for a total of 1,935 available counties.

The program’s intent is to reduce the risk for farmers who decide to double-crop while increasing U.S. production of wheat and soybeans in an effort to help overcome anticipated worldwide food shortages. It is in response to the war in Ukraine and potential food shortages that could result from the conflict. Combined, Russia and Ukraine growers supply than 25% of global wheat exports, especially through exports to food-deprived African countries.

Among other policy proposals discussed by the Biden administration was a $10 per acre double-crop soybean crop insurance subsidy to make this crop rotation more attractive to producers. This month’s Purdue University Ag Economy Barometer survey asked 400 large-scale growers if this subsidy would encourage them to seed more wheat in the fall 2022 than they would otherwise.

For 2022, USDA’s Risk Management Agency staffers says there are still available options for insuring double-crop soybeans, grain sorghum and other crops in counties where the government’s Following Another Crop program is not available. Prior to July 15, growers may request an unrated practice or type practice written agreement through their crop insurance company to insure their double-crop. In some counties, growers also have the option of requesting coverage for the relay cropping of no-tilled soybeans no-tilled into wheat.

Soybeans in the U.S. are grown either as a single crop or as a double (second) crop.

Compared to single-crop soybeans, double-crop soybeans have a shorter growing season due to the delay in planting until the wheat is harvested, which often result in reduced yields. Despite this drawback, doubling-cropping can provide benefits, although adoption depends heavily upon geographic location.

Double crops also tend to require lower applications of fertilizer and herbicides. Lower input volumes and lack of extra land cost can offset what is generally a lower yield from the second crop. The winter wheat also combines cover crop benefits with a cash crop.

More Popular in the South

Over the past 5 years, North Carolina has had the most double-crop soybean acres with an average of over 500,000 acres. Other leading states include Illinois, Kentucky and Tennessee.

As a percentage of total soybean acres, Virginia led with almost 39% of its soybean acres being double-cropped. Oklahoma, Georgia and North Carolina also topped the 30% threshold.

The southern portions of the U.S. have a longer growing season, which better accommodates fitting a second crop into the growing season. As a result, states further south tend to have a higher percentage of double-cropped beans.

Crop insurance data provides a closer look at double-cropping. Following another crop, government-insured acres represent only about half of the total double-crop acreage.

USDA’s Risk Management Agency has determined growing conditions are favorable enough for soybeans that they do not distinguish between them and single-crop beans starting in Alabama and moving northeast through the Atlantic seaboard, even though the practice is insurable. This is a large part of the reason that the number of insured acres is so much lower than the number of double-cropped acres.

The White House recently announced a plan to expand the number of counties eligible for double-crop crop insurance, which could potentially increase the number of eligible counties by around 50%. While producers can potentially sign a written agreement with USDA to provide coverage for the crop, expansion would negate the need for the written agreements but can potentially change how actual production history yields are calculated.

Double-crop soybeans are an efficient use of land resources. While currently making up roughly 5% of the U.S. total soybean acreage, this still results in about 4 million acres of soybeans being grown each year. While double-cropping tends to be more concentrated in the southern U.S., USDA is reviewing new areas proposed for an acreage expansion. This has the potential to improve access to crop insurance, which could assist double-crop expansion. 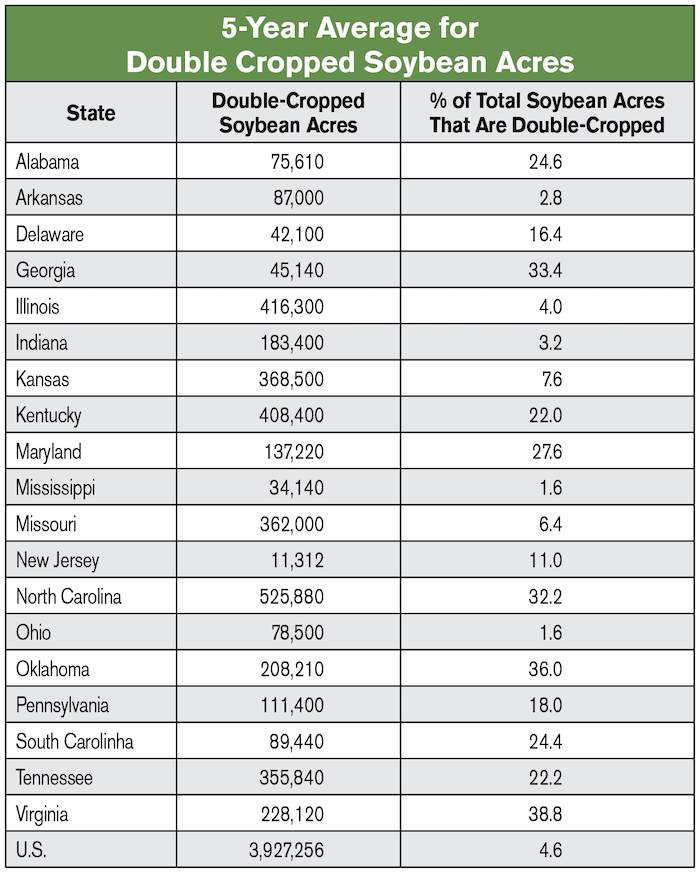 Survey: Less than 20% of Consumers Have Heard of No-Till

USDA Reports 91% of Soybeans Emerged in the U.S.