Grain sorghum is a warm-season grassy crop most known for its efficient water use and drought tolerance. It is primarily grown in the southern Great Plains, but recent genetic improvements have made it possible to grow it in cooler climates. Many Nebraska farmers have, therefore, implemented grain sorghum as a complementary part of their dryland crop rotation.

In semiarid western Nebraska, corn is the most prevalent crop in dryland crop rotations, taking up approximately 50% of the planted acres every year. However, research completed on grain sorghum in the central Great Plains region makes a compelling case for grain sorghum. It offers several advantages over corn under certain conditions: 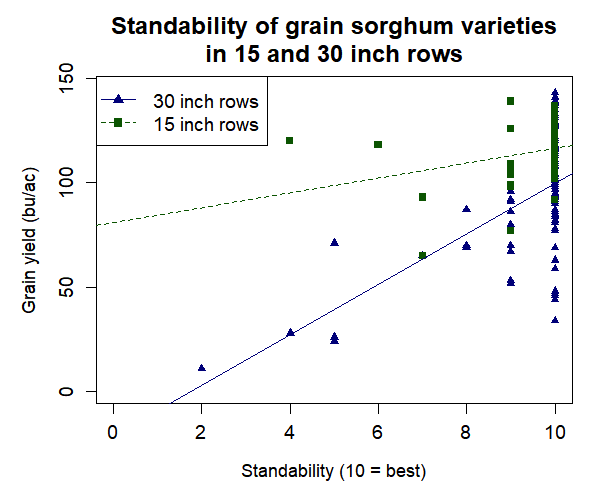 Figure 2. Relationship between yield and standability of grain sorghum varieties evaluated during the 2019 growing season at Grant.

To help western Nebraska farmers identify the best-adapted genetics for grain sorghum in the region, we initiated variety testing at Henry J. Stumpf International Wheat Center near Grant. In addition, we wanted to evaluate the effects of row spacing on sorghum varieties. We evaluated the performance of 24 grain sorghum varieties planted in 15- and 30-inch rows.

Key Takeaways from the Study

Overall, grain sorghum yielded better in narrow rows. When averaged across all varieties, yield in 15-inch rows was 115 bu/ac, which was 20 bu/ac greater than in 30-inch rows (Table 1). K-State researchers reported a yield benefit of 4 bu/ac with narrow (15-inch) rows as compared to wide (30-inch) rows, especially when yields were above 70 bu/ac (Ciampitti, 2019).

Variety performance ratings changed with row spacing. Among 24 varieties evaluated, 16 varieties yielded 10-77 bu/ac better in narrow rows, six varieties had similar yield (± 10 bu/ac) regardless of the row spacing, and only two varieties had at least a 10 bu/ac yield increase in wide rows. In our study, narrow rows yielded better 75% of the time. However, in a similar study, K-State researchers reported that 71% of all the observations yielded better with wider rows.

Each seed company had at least one top-performing variety, regardless of the row spacing. In western Nebraska where grain sorghum is not as widespread, increased competition can provide easier access to the good seed and agronomic services.

Avoid varieties with long maturity and lodging issues. Varieties evaluated in this study were early to medium in maturity and 51-67 days to mid-bloom (Table 1). Keep in mind that in our cooler environments, days to mid-bloom can be delayed by as much as 20 days when compared to what is reported by companies. The AS262 from Arrow Seed and two Hoegemeyer varieties (XP4720 and HPT 6064) seemed to be particularly late in their development, which affected their performance. Certain varieties had lodging issues when planted in 30-inch rows (Figure 2). For example, Dyna-Gro M57GB19 lodging was severe in 30-inch rows which caused it to be ranked 21st among 24 varieties evaluated. In 15-inch rows, the same variety was ranked second best.

Grain sorghum has a great potential to be a part of dryland crop rotations in western Nebraska. Although this study was a good start for developing grain sorghum resources for Nebraska growers, we remind growers always to consider multi-year and multi-location data when making important agronomic decisions.

Table 2. Ranking of grain sorghum varieties by their performance in 15- and 30-inch rows