7 Tips for Making the Most of Prevent Plant Cover Crops

As the planting deadlines for corn and soybeans pass, an unprecedented planting season has many producers in the Midwest looking into prevent plant options. USDA’s recent announcement on 2019’s final haying and grazing dates being adjusted from Nov. 1 to Sept. 1, and eligibility being extended to include silage, haylage and baleage, has opened the door to better utilization of prevent plant cover crops.
“From making livestock feed to reducing next year’s synthetic fertilizer requirements, there are multiple options available to make the most of prevent plant cover crops,” says Brent Jones, Iowa Research Farm Manager and salesman for Grassland Oregon. “To fully capitalize on their benefits, careful planning must be had before anything goes into the ground.”
1. Determine what you’re trying to achieve
“For cash crop producers with livestock, there is a huge opportunity to grow high quality feed for this fall and winter – and a lot of it,” says Jones. According to the Cover Crop Basics guide, grass species like annual ryegrass, sorghum-sudangrass and legumes like balansa and berseem clovers are going to give livestock producers the flexibility to graze, hay or make silage, and potentially stockpile (See Figure 1). 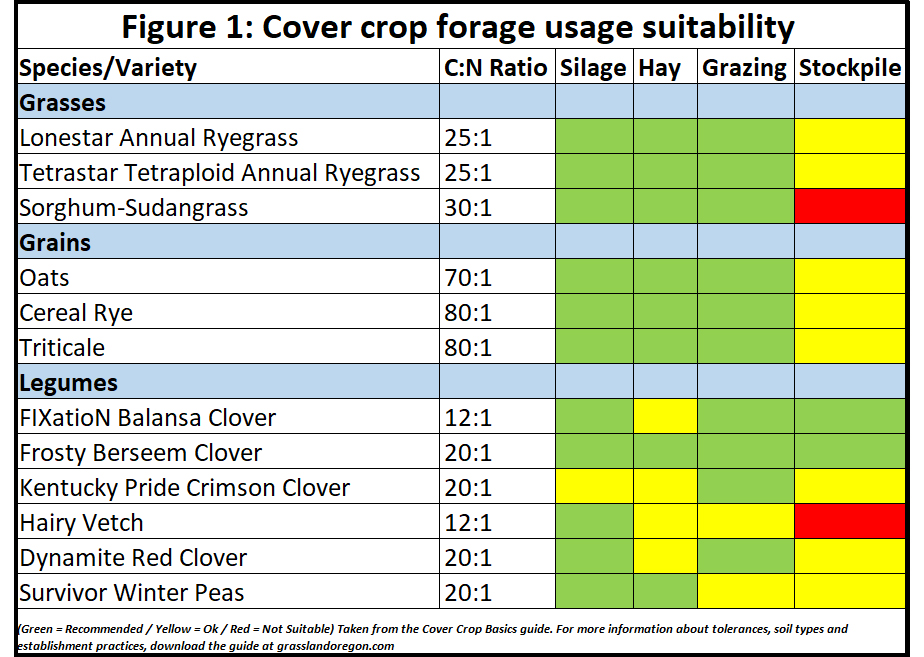 “If you’re needing something that is going to give you both bulk and feed quality, FIXatioN Balansa Clover can deliver more that 22 percent crude protein and is capable of producing more than 20 tons of silage per acre the following spring if planted in September,” explains Jones. “It’s deep taproots and the ability to fix more than 200 pounds of nitrogen per acre also make it a great option for producers looking for a cover that will provide nutrients and soil
improvements for the next cash crop.”
If a cover crop is going to be used to produce livestock feed, warm season grasses are the best bet and can be planted now, advises Jones, while planting can be delayed until September if the goal is to have an overwintering cover. For both systems, look at the opportunity to control erosion, suppress weeds and to feed soil biology with added biomass for soil health improvements.
“It’s also very important to plant a diverse mix of species,” adds Jones. “This will ensure that something will grow on farms with variable soil types and moisture scenarios.”
2. Speak to your crop insurance agent
With the amount of confusion that has surrounded prevent plant regulations and the mid-season policy updates, it is best to consult crop insurance providers in the process of determining cover crop usage.
“This cannot be stressed enough – speak to your crop insurance provider to make sure you are in compliance with the rules and regulations,” explains Jones. “Be sure to get it all in writing so nothing slips into any grey areas.”
3. Keep the next cash crop in mind
If the next crop is going to be corn, cold tolerant nitrogen fixing legumes can reduce the following year’s synthetic nitrogen requirements, while grains like triticale and cereal rye work well ahead of soybeans (see Figure 2). 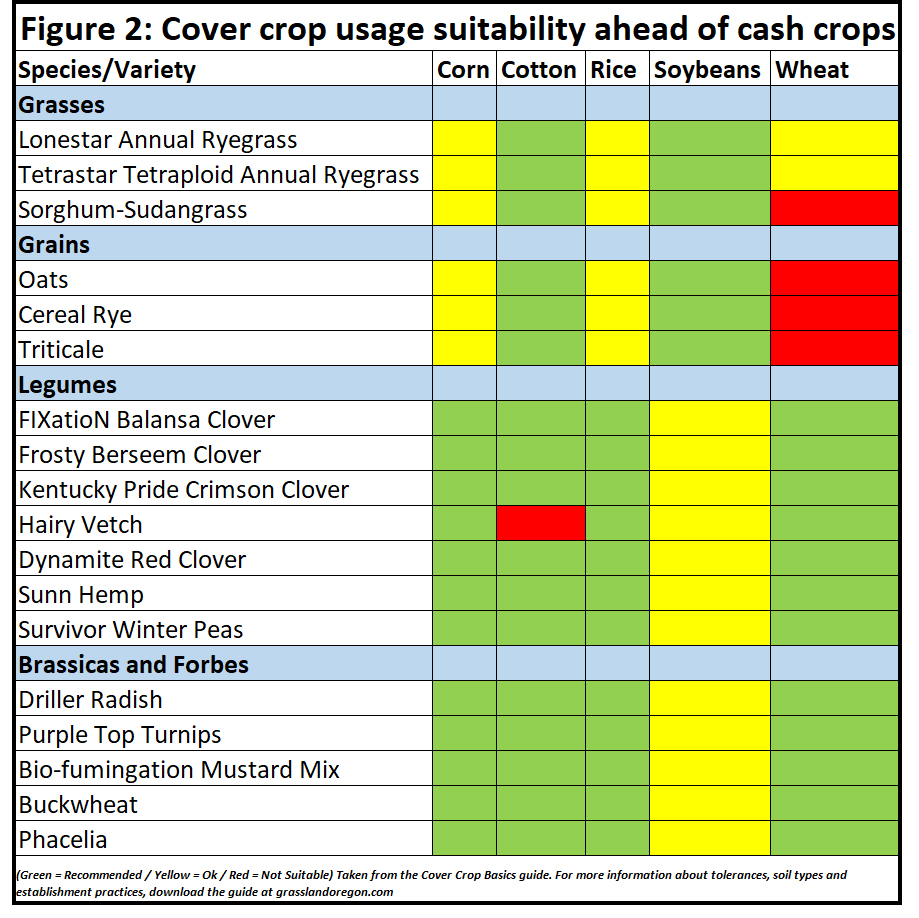 4. Look at the previous chemical program
Because preemergence herbicides may cause cover crop establishment failures and not be meant for livestock purposes, the previous chemical program needs to be examined.
“If a cover crop is going to be used for livestock feed, it is especially important to understand if the previous chemical program is cleared for this intended use,” explains Jones. “Your local Extension agent will be a good resource to speak to about which species are compatible with the chemical program that was started.”
5. Pay attention to C:N ratio
Carbon to nitrogen (C:N) ratio is a good determinant of how fast residue will decompose and when nutrients will be released to the soil.
“Ideally, we want a C:N ratio of 24:1 or something as close to that as possible,” explains Brent. “The higher the ratio, the longer it will take plants to decompose and release their nutrients to the soil. In general, legumes have relatively low C:N ratios and grains have higher C:N ratios. A mix of the two will help get you in the target range.”
6. Select for variety traits
According to Jones, planting VNS (variety not stated) is risky and can be a good way to set your cover crop program up for failure before it’s even in the ground.
“Just like corn and soybeans, varieties matter in cover crops,” he says. “Heading and flowering dates, biomass yield, nitrogen fixating capabilities and disease resistance are all traits that have been bred into cover crop varieties.”
In a trial by University of Illinois, Kentucky Pride Clover and Dixie Crimson Clover were analysed from September to the following May for winter survival, root depth, weed suppression, biomass, nitrogen fixation and date of full bloom. Dixie Crimson Clover, which is the industry standard variety, has had no breeder control since its release in the early 1950’s. The study found Dixie Crimson Clover to have a 69 percent winter survival rate, 56 percent weed suppression rate and only fixed 14 pounds of nitrogen per acre. However, Kentucky Pride Clover had a 94 percent winter survival rate, 88 percent weed suppression rate and fixed 187 pounds of nitrogen per acre.
“Recent reports indicate a shortage of cover crop seed, which makes variety selection more important than ever to avoid crop failure from either poor-quality seed or a crop that is genetically incapable of performing for the intended purpose,” explains Jones. “Grassland Oregon has increased cover crop seed production in the last few years to meet demand for the rapidly expanding market. Quality seed of proven cover crop varieties are available and can be the difference between success and failure.”
7. Be patient
Jones’ last piece of advice: Exercise patience.
“Understandably, many farmers are anxious to get something in the ground,” he says. “But making sure you have the right species and varieties planted at the right time and in the right conditions will save you headaches in the future.
For more information about cover crop options, click here to download the Cover Crop Basics guide from Grassland Oregon.