New Technology That Can Help Nitrogen Stick Around Longer

No-tillers with certain soil types and weather challenges may find ESN’s technology is a good fit for raising high-yielding, profitable corn while protecting their ‘N’ investment.

Tracking and keeping nitrogen (N) in the field, where it can be taken up by plants, has been a longtime worry for no-tillers, especially those living in wetter areas where N can leach from the soil profile.

And Mother Nature’s unpredictability the last several years in the Corn Belt, with rainfall often coming in torrential rainstorms instead of regular, measured amounts, is also making weather patterns harder to predict.

After more than 800 site-years of evaluations over the past 15 years by independent third-party researchers, the makers of Environmentally Smart Nitrogen (ESN) are confident their product has a role to play in efficiently fertilizing corn.

“We’re not claiming ESN is an answer on all farms or to all farmers, but we can tell farmers confidently that the greater the potential for N loss in their field, the greater the benefit will be in using ESN,” says Alan Blaylock, agronomy manager for Agrium Wholesale in Loveland, Colo.

“It’s a proven controlled-release technology that’s very flexible for corn farmers in how and when it can be applied. Besides being most effective where and when it’s most needed, evaluations are showing ESN stabilizes yields over time, as we get more and more volatile weather in the Corn Belt.”

ESN technology uses a flexible polymer coating to completely encapsulate an N granule. The idea of the coating is to protect N from leaching, volatilization and denitrification after it’s applied, until the crop needs it most.

Leaching can lead to 60% loss, volatilization losses can be up to 40% and denitrification can lead to up to 60% N loss.

“The controlled release helps avoid those losses and keeps the nitrogen in the field until it can be used by the corn plant,” Blaylock says. “Soils that are wet coming out of the winter and from early spring rains are at risk of N loss. Sandy soils are especially vulnerable to N leaching, and there’s N loss in heavy wet soils with poor drainage where corn yellows in many years.”

Blaylock says the coating acts as a membrane to eliminate much of that risk where the potential for N loss is great. It lets water move in and dissolve the N into an N solution inside the coating, then soil temperature controls the rate N moves through the coating into the soil.

“The idea is to match the demand of the growing crop for N — it’s a smarter way to grow corn,” he says.

While there may be similar products on the market, Blaylock says ESN is the only product of its kind in use on broad field acreages in agriculture. “ESN is an advancement from technology that has been used in nurseries, golf courses and yards as a slow-release N fertilizer for years, so the technology is not new,” he says. 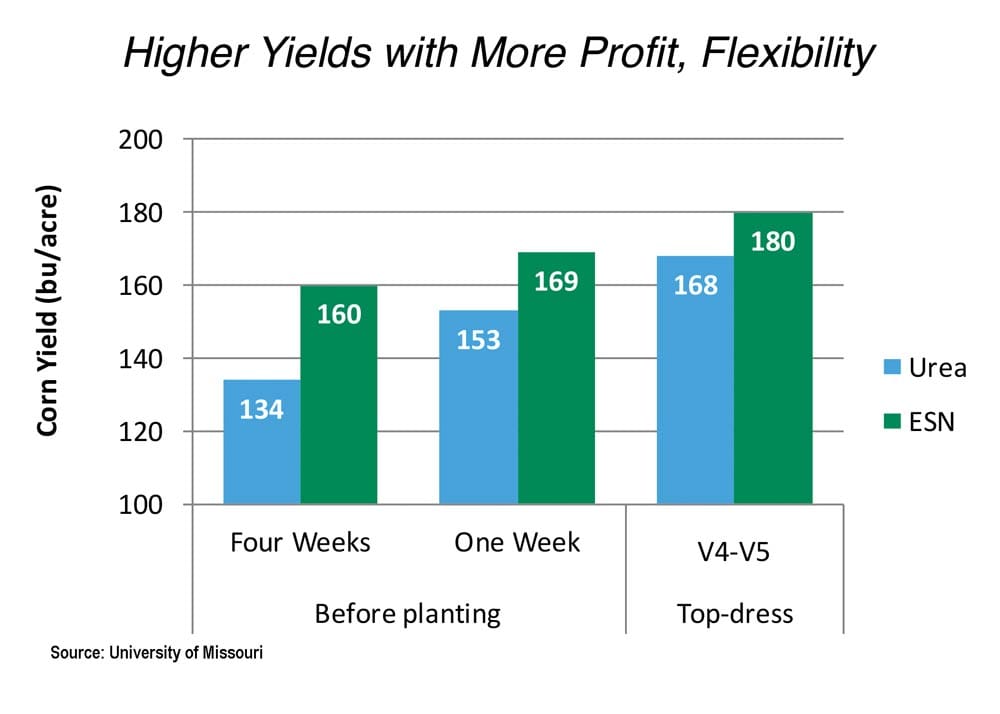 HIGHER RETURNS. Four site-years of evaluations at the University of Missouri have shown higher corn yields with ESN compared to urea both as a pre-plant and as a topdress. Per-acre profits show ESN increased net returns by $61 when applied 4 weeks before planting, $26 applied a week ahead of planting and $12 applied as topdress.

Steady Growth in Use

The use of ESN has grown steadily since it was introduced commercially to U.S. corn growers by Agrium in 2003. Blaylock says sales have increased every year, and enhanced efficiency products like ESN are more frequently becoming part of conversations now about fertilizer.

“When ESN was introduced almost 15 years ago, we didn’t have the production capacity needed to supply everyone, but now we have a plant in southeastern Missouri that serves the Midwest and it’s widely available across the Corn Belt,” Blaylock says.

“Farmers are under increasing pressure to reduce the environmental impacts of nutrients, but an even more important reason for farmers to look at them is that every pound of nitrogen that’s kept in the soil is a pound of nitrogen the crop can use. That nitrogen has been paid for, but it’s not going to help the crop if it isn’t there when the crop needs it.”

“ESN is really your only controlled-release fertilizer that can protect against early season volatilization and leaching,” says Craig Dick, vice president of marketing and growth for Cropstream.

He likes ESN as part of an N program, as a third to two-thirds of the N mix.

“Our retail group that distributes from South Dakota to Ohio believes ESN fits well as a nitrogen component because it can delay a significant amount of the nitrogen for when the crop needs it, yet we need urea or AMS with it to be sure the crop isn’t shorted on nitrogen early,” Dick says.

He also believes ESN is a great fit in a strip-till program because its controlled-release nature reduces the concentration of soluble fertilizers in the seedling root zone.

Yield data from ESN use is clear after about 60 site years of evaluations from the University of Missouri.

Kelly Nelson, a research agronomist at the University of Missouri’s Greenley Research Center, says researchers have done a lot of agronomic production studies of ESN and have documented an increase in yield of about 5.7% with ESN compared to urea. Their plots in northeastern Missouri are the perfect place to study ESN, Nelson says, with soils that have denitrification and ammonia volatilization issues.

He also found ESN to be very flexible on fall applications of wheat and also found it to have excellent crop safety on all crops.

"Sandy soils are especially vulnerable to nitrogen leaching, and there’s N loss in heavy wet soils with poor drainage where corn yellows in many years…"

In a Nebraska study by Richard Ferguson, a soil fertility specialist at the University of Nebraska, ESN produced a consistent yield response in 3 years of different rainfall conditions, while performance of conventional N sources varied widely because they were more subject to N loss.

“Anyone pushing for higher yields should consider ESN,” Dick says. “You need N later in the season for high yields. Some farmers intend to sidedress for that, but it doesn’t always happen. ESN is an easy way to make N available late in the season.”

“Some farmers say they can use ESN as pre-plant and use only one application trip — that was our original design for its use,” Blaylock says. “And that’s working for many farmers. But many also put it on over the top of growing corn. In cases of sandy soils or conditions of severe early season N loss, topdress ESN applications may be preferred to pre-plant applications.”

Kurt Steinke, assistant professor at Michigan State University, found an increase in corn yields over urea with ESN applied pre-plant or at sidedress. Steinke thinks ESN may need to be applied earlier in the spring to reveal the product’s greatest potential.

There’s probably as much ESN used as topdress as there is pre-plant, Blaylock says.

“It’s a way to manage risk,” he says. “It can be mixed with urea for immediate N needs. With changes in corn genetics, corn takes up much more nitrogen at the grain-fill stage, so delayed release of N until August or September can help contribute to higher yields.”

When used as a pre-plant to be mixed with other N, Agrium generally recommends ESN make up 70-90% of the total N applied.

For topdressing at about V6 to V8 in corn, 50-75% of the N should be ESN, with the balance as an immediately available source such as urea or ammonium sulfate.

In northern climates, ESN is a good alternative to anhydrous ammonia as a fall application, Blaylock says.

“It’s not a good idea to use ESN in the fall in warmer areas, say south of Interstate 80,” Blaylock says. “But in freezing conditions, ESN shuts down. We’re seeing it used in the fall and the same guidelines as anhydrous apply for timing, when temperatures fall below 50 F.”

He adds that savings of N with fall application of ESN are roughly equivalent to N savings of anhydrous applied in the fall with N-Serve.

Blaylock says the price per pound of anhydrous ammonia is less than ESN, but he isn’t convinced the cost is lower when the cost of N-Serve and application are added in.

“It takes more fuel and time to knife in anhydrous, and there’s a safety factor to consider,” Blaylock says. “Just about any farmer can rent or get the use of a spreader cart for ESN and apply it easily and quickly.”

He adds that conservation programs such as EQIP and the NRCS Conservation Stewardship Program, as well as programs from conservation districts, may offer incentives for ESN as an enhancement to N management programs.

A study in northeastern Illinois by Randy Simonson comparing UAN, UAN plus additives and ESN under stressed conditions found ESN was the only product that produced a statistically significant yield increase over untreated UAN solutions.

The bottom line: a yield increase of 30 bushels an acre netted a value above UAN of $80 an acre.

Some farmers don’t think about fertilizing soybeans with N because research has shown soybeans may stop forming nodules if there’s a large amount of available nitrate in the soil. But Blaylock says ESN’s controlled release of N may be a good fit to supply N up to soybean flowering.

Applying 40-80 pounds per acre of ESN somewhere from at-plant through V5-V7 gives ESN capsules enough time to hydrate, begin releasing urea into the soil, and for N to move down the soil profile to the soybean root.

How No-Tilling Can Help 'Weatherproof' Your Farm