What I've Learned from No-Tilling

Once he realized that subsoiling was unnecessary, Italian no-tiller Mauro Collovati created a wide-sweep-designed opener that performs well on his wide range of soil types.

POSITION: Founder of Technoagricola and inventor of Collovati opener technology

IT’S NOT SURPRISING that agricultural equipment designs used in sustainable farming systems were often created on the kitchen table. Many prototypes of brand-name tools used for no-till and minimum-till crop production were born when innovative farmers saw a need for certain technologies not available from traditional market sources — and they “built it themselves.”

More than a few well-known agricultural companies can trace their history to farm shops. I know this has been the case in the United States and Canada — and it is also true in my region of northwest Italy.

I like to think I am a good example of how frustration in the field can lead to positive results for the agricultural industry. In this case, it encouraged me to design, develop and patent the low-disturbance Quasar air seeder, which features Collovati opener technology — a unique wide sweep that combines seed and fertilizer placement with minimal disturbance of the soil terrain.

After several years of field research and market development — and a couple “false starts” — my company, Technoagricola, was acquired by the Tonutti Group in January of 2008.

Tonutti S.P.A., founded in 1864, is Italy’s leading innovator of agricultural technology, with a long history in hay equipment. Just recently, Tonutti USA, a division of the company, expanded its headquarters in Memphis, Tenn. We expect to begin distributing the Quasar series of low-disturbance air seeders to U.S. farmers once we have completed necessary market research.

HOW IT ALL BEGAN

As a young farmer, I worked a lot with sugarbeet production. The normal cropping system included subsoiling to fracture soil compaction, tilling the ground in the spring and seeding with a traditional sugarbeet planter. Over time, this frequent cultivation and disturbing of the soil led to a decline in fertility and loss of organic matter. 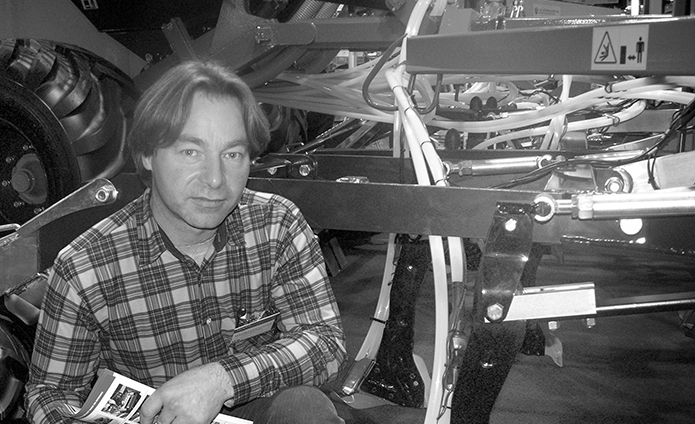 I concluded subsoiling was unnecessary. For field crops like corn, soybeans and cereals, I used a no-till planter equipped with double-disc openers that I purchased in the United States and modified for our soils.

Instead of subsoiling to manage soil compaction, we turned to forage sorghum cover crops. The forage sorghum, which grows to a height of 6 feet, protected the soil until spring, improved organic matter, helped build soil tilth and competed against weeds.

On my farm, which is located only about 20 miles from both the mountains and sea, we have a wide range of soil types and a favorable climate for high yields. Like many American no-tillers, managing the many tons of crop residue left after harvest, particularly in corn, was an ever-increasing challenge.

During visits to the United States and Canada, I was intrigued with the design of Flexi-Coil, Concord and other air seeders. I concluded that none of the current opener designs utilized were what we needed.

From a commercial perspective, I knew any new planting system needed to maintain the high production levels growers were accustomed to with whatever system they were using. Otherwise, it would not be accepted no matter how promising the design might be.

One of the concerns we needed to address was whether there was a way to place seed under the residue and under the soil surface without disturbing the residue, while maintaining high germination, healthy root growth and, subsequently, high yields.

Enter the Collovati opener. The wide-sweep design of the device, that eventually was the result of a lot of late hours and persistence, answers all of the above concerns. Using a “wing” design that applies the theory of “dynamic flow,” the Collovati opener performs several key functions. 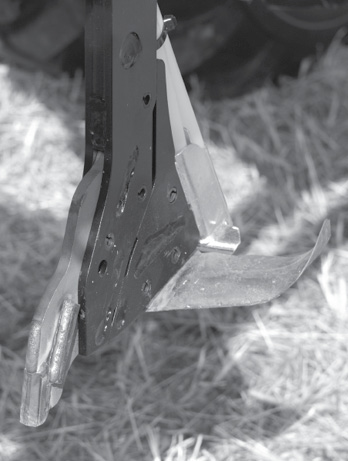 First, it creates vertical furrows in the soil, while leaving residue on the surface to protect the soil from erosion and crusting.

Second, it re-closes the furrow without the use of additional seed covering devices, thus lowering operating costs. The residue settles back down on the soil surface and — if you didn’t know that you had just planted the crop — the field looks untouched.

Third, the opener can be used in any soil conditions in any type of terrain.

In addition, the Collovati opener does not compact the soil; in fact, it penetrates even in tight soil conditions. It allows in-row or solid seeding of corn, soybeans, cereals, rice, forage and other crops. And it provides safe separation of seed and fertilizer

Soil scientists at the University of Padova in northwestern Italy compared our wide-sweep opener to double-disc openers under no-till conditions. Over a 2-year period, they focused on the effects of the two systems on soil physical properties in the seed zone and on crop emergence and early root growth of corn. Soil types varied from silt clays to silt loams. 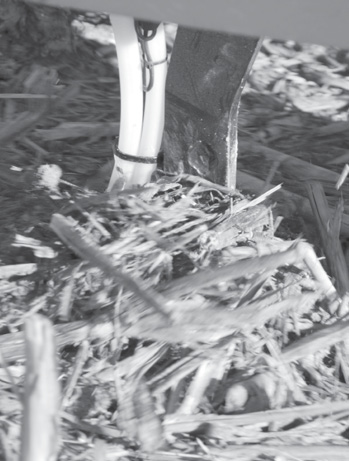 Among other findings, the researchers concluded that our wide sweep opener, connected to a parallel-linkage system, achieved higher incorporation of crop residues and uniform sowing depth. In no case did the double-disc opener perform better than the Collovati opener. This was particularly good news, considering the many other benefits our system offers in time and energy savings, lower production costs and positive environmental benefits.

We have also done field research where corn is planted in 7-inch bands, with 30 inches between bands. We feel this planting design, which we have seen used successfully in France, has much better yield potential than planting in single rows.

But in the French fields, costs were higher because the growers needed to use two seeding elements next to each other to plant in the band. With our seeder, we can distribute seed over the 7-inch width with a single shank.

Like many other farmer inventors, I needed guidance and connections to bring my designs to a broader market.

During the first years after perfecting the Collovati opener technology, I affiliated with two German companies. Unfortunately, the first went bankrupt and the second one was sold to another company that decided to specialize in other products.

During this time, however, the seeder gained a positive reputation with farmers in Italy, Germany and France.

Then I had the opportunity to meet Carlo Tonutti, president of the Tonutti Group, when we were, by chance, both working on a test field for a regional project exploring the medical aspects of cannabis. My farm is located just 20 miles from the Tonutti factory.

He was very interested in our seeder and over time, we worked out an arrangement where I became a partner and one of the managers in the new Tonutti Technoagricola division.

We are now in the process of determining where and when to market the low-disturbance Quasar series of air seeders.

In January 2008, I attended the National No-Tillage Conference in Cincinnati with Ralph Booth, vice president of operations of Tonutti U.S.A. in Memphis, and Thomas Reissig, corporate export manager for the Tonutti Export Group, from company headquarters in Ramanzacco, Italy.

During the conference, we had an opportunity to discuss the new seeder and the Collovati wide sweep opener with attending farmers. It was interesting to hear questions similar to those asked by no-till farmers we’ve talked to at other conferences.

Their primary concern was whether the seeder would work in heavy residue, a challenge that seems to be growing worldwide as more producers turn to low-disturbance farming methods.

From our experience in Europe, we could assure them that our wide sweep shank design does handle all types of crop residue effectively, and at a lower cost than planting systems that require multiple passes across the field.

We will be demonstrating our air seeders at farm shows this year — and asking more questions. Tonutti will distribute the machine to U.S.-based agricultural retailers for sale only after it’s sure that it meets the needs of North American producers.

Fixing Flaws Of No-Till In Infancy Led To Opener