It may seem improbable and even Terry Dahmer admits his neighbors have thought it a bit unusual, but each spring you’ll find the Marion, Ill., no-tiller pulling a soybean drill through fields of cereal rye about 5 feet tall.

When it comes time to drill soybeans, the only thing you can see above the standing cereal rye is the tractor cab. That’s a situation that most growers would think is impossible for establishing a stand of soybeans.

“It gets pretty serious when it’s 5-and-a-half feet tall,” Dahmer says. “But I’m after organic matter with this cereal rye and it works real well for holding the moisture and holding weeds back.

“It looks real tough when you drill into it, but I haven’t had any troubles getting a stand.”

With some of his farmland in continuous no-till for more than 25 years, the southern Illinois no-tiller says using cereal rye as a cover is his latest effort to build organic matter.

“In this part of the country, we don’t have organic matter,” he says. “Even with no-till, we can’t seem to build it. It may be because it’s so warm down here. My objective with cereal rye has been to build organic matter.

“I’ve seen what I thought are some benefits. Last year, I had one cornfield that should have burned up, but it didn’t. The only thing I can come up as a reason why my neighbor’s corn was curling and mine wasn’t was because of the cereal rye cover crop I’ve been using on my farm.”

As unusual as it is to see soybeans drilled into standing cereal rye, the unusualness begins the previous fall when it comes time to plant cereal rye. Prior to corn harvest, Dahmer hires an aerial applicator to fly the seed into his standing corn. 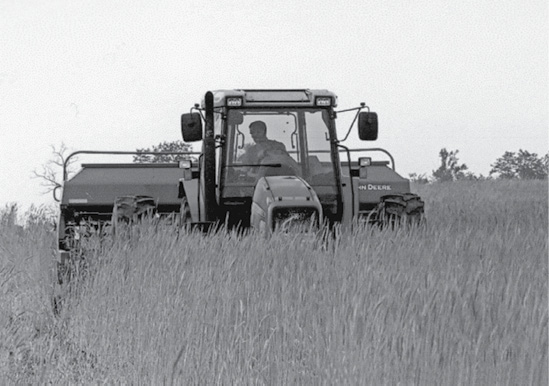 He applies seed at a rate of 90 pounds per acre, which typically costs about $15 per acre. By the time he harvests corn, the cereal rye has grown to a height of about 3 to 4 inches.

“It’s not a perfect system by any means, but with the kind of fall weather we have around here, you can’t get across all these acres with a drill because it gets too muddy,” Dahmer says. “Sometimes, I tear up the cereal rye a little bit during harvest, but I get a high percentage of it to emerge and take hold.”

Dahmer admits that he takes the extra effort to rid his fields of weeds. One of the benefits of the cereal rye cover crop is that it helps control winter annuals.

“I like that because the winter annuals can be hosts to soybean cyst nematodes, and it helps hold back chickweed,” he says. “It’s not perfect, but it holds them back some and it’s harder for those weeds that come up in the spring to emerge because of all of that mulch.”

“I might be able to cut back on a Roundup application, but I don’t like weeds and feel it’s worth it to keep the fields clean,” Dahmer says. “I’ve seen some of my neighbors who let those weeds go and I refuse to do that. If it only costs me $3 per acre, why not spray the field? I go out there and make sure it’s dead.”

Typically, Dahmer likes to make his burndown application to cereal rye 2 or 3 days before planting, but he has also planted into a live cereal rye crop and made his glyphosate applications after drilling beans.

“I’ll spray it 2 or 3 days before planting if I get the opportunity because I like to use 2,4-D in my mix,” he says. “But there are times I’ve had to spray it after beans have been drilled, so then I leave the 2,4-D out.”

Dahmer has sprayed cereal rye 2 to 3 weeks prior to drilling soybeans, but he likes to allow the cereal rye to grow to produce a lot of material to make a mat.

“Moisture is my limiting factor in this part of the country,” Dahmer says. “We worked at a job about 120 miles north of here and there was a 10-degree difference in the temperature between here and there. 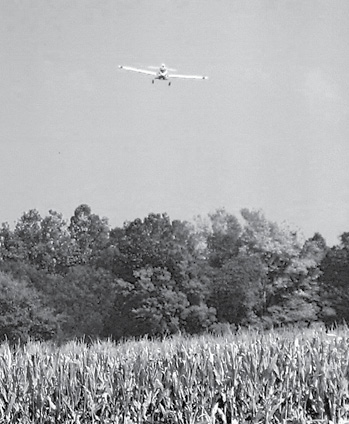 “Being 10 degrees warmer here really sucks the moisture out of the soil. So that mat of cereal rye residue provides protection from the heat and conserves moisture.”

At the same time, Dahmer says that if he has an unusually wet spring, the cereal rye helps take some of the moisture out of the ground so that he can drill soybeans sooner.

“You’ve got to balance that situation out,” he says. “In a year like this where we’ve had a lot of moisture, you may want to leave it in the field longer and draw some of the moisture out. If it’s a dry spring, you may decide to go hit it with your burndown a little earlier.”

With all the root mass from the previous corn crop and the cereal rye, his fields won’t be as muddy in wet years as bare fields.

“It’s going to forgive some of the mistakes you make when you go out there and it’s too wet. The soil will crumble when others won’t,” Dahmer adds.

Depending on how early Dahmer burned down cereal rye, there could be a mat of ryegrass beginning to lie down when he drills soybeans. While he hasn’t had difficulty drilling into the heavy residue, he does watch one thing carefully.

“I have to watch the depth so that the seed gets good soil contact,” he says. “If your gauge wheels are running an inch above the ground because you’re running across a mat, you have to allow for that inch of mat.”

Up until this past year, Dahmer had used a John Deere 750 drill. This past spring, he purchased a John Deere 1590 drill. The drills are set up with a single coulter with a gauge wheel running alongside the coulter. A small wheel firms the seed in the trench and a cast-iron press wheel follows.

“I think the 1590 will work a little better because of the way the bearings are situated on the press wheels,” Dahmer says. “I was having a little trouble with the 750 drill because it was 12 years old and it had a tendency to accumulate a little moisture in the morning and gather some dirt that would eat up all the bearings.

“With this new drill, they moved the bearing from one end of the shaft to the other and I think that will make a lot of difference.”