The best height for sprinkler devices relative to crop height has been debated for some time and has recently resurfaced. Some have decided to reposition devices at the truss rod height back to atop the pivot pipeline because of the tall corn varieties being grown today. Others have opted to place sprinklers down in the canopy to try to “save” water. Keep in mind that transpiration is small while the canopy is wet from irrigation because evaporation is occurring from the canopy.

The challenges of getting good water application uniformity while preventing runoff or water moving within the field is greatly increased when sprinklers are placed in the crop canopy (Figure 1). The spacing needs to be close, 5 feet or less is best, but not more than 7.5 feet Many people today are using 30-inch spacing on the outside three or five spans. The added sprinklers will increase the package cost and require smaller orifices. If any sand or debris is in the water, it should be filtered before going into a pivot with small orifices to prevent plugging. 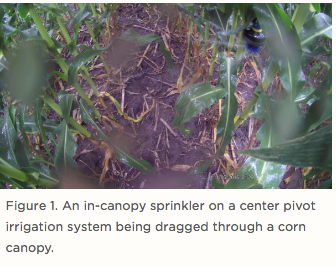 Pivots that will irrigate both corn and shorter crops like soybeans have an added challenge when determining the sprinkler height because of the vastly different heights and canopy structure.

In addition, producers can mitigate evaporation by selecting newer sprinkler devices that produce large or medium sized drops and then leave some crop residue on the soil to prevent surface sealing. Further mitigation can be achieved by keeping the wetted diameter of the sprinklers as small as possible without creating runoff. Thus, the comparison should always be between the best designed sprinkler package — either above- canopy or in-canopy — for a given field and specific location and your water supply.

Sprinkler packages in the crop canopy have an advantage over above canopy sprinklers by reducing evaporation and wind drift losses. Factors to consider include:

Sprinkler packages designed to operate in the crop canopy have several disadvantages over above-canopy sprinklers: 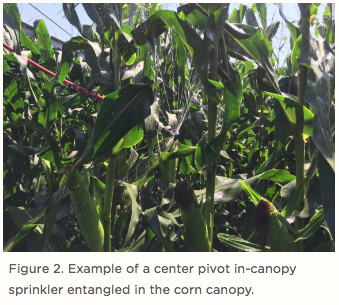 Based on our observations several practices can help improve the success of sprinklers placed in the canopy: