Selecting the proper sprinkler package for a center-pivot or lateral-move irrigation system is essential to efficient operation. New pivots that have the latest control options but a poorly designed sprinkler package will not perform adequately. Frequently, insufficient consideration is given to selection of the best type of sprinkler device for a new pivot or an existing system that’s being updated. Sprinkler devices and their associated operating pressure are often selected based on traditional choices, new promotions, or the lowest capital cost without adequate consideration of local conditions. Characteristics specific to the field, supply pump, and sprinkler package should all be considered.

Our objective is to highlight consequences of design choices and explain how decisions affect the uniformity, application efficiency, and quantity of water lost from a center pivot. An important consideration is the placement of sprinklers in or above the crop canopy. The definition of above canopy sprinklers for the purpose of this article is any device operating above the crop, including truss rod height even when corn tassels are up around them. The top of the corn canopy is fairly open and has minimal effect on the pattern.

We explain the selection of sprinkler devices and considerations for the mounting height, the flow rate in gallons per minute for the pivot, and the sprinkler operating pressure. After determining these factors, the details of the design can be developed in consultation with sprinkler or pivot distributors or manufacturers.

Improving the application efficiency of the center pivot is often the goal of lowering sprinkler devices into the canopy. Operators should understand what factors affect water losses and the magnitude of the losses.

Water “losses” from a pivot are caused by several factors: 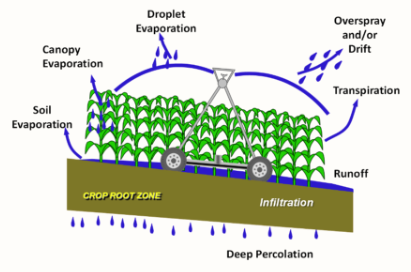 Figure 1. Paths of water loss from a center pivot.

Research at Bushland, Texas showed that impact sprinklers placed on top of the center-pivot pipeline were about 85% efficient in applying water to the soil, while spray heads on drops at truss-rod height were about 92% efficient. Low energy precise application (LEPA) irrigation systems could be up to 98% efficient if operated perfectly. This experiment was conducted mid-day with temperatures of 88°F, wind speeds above 15 mph, and a relative humidity of about 36%. The water supply rate was about six gallons per minute per acre with an application of one inch of water after the corn canopy had reached its full height.

The field was quite flat and consisted of a Pullman clay loam soil. The LEPA portion included basins to store water applied at rates that exceeded the infiltration rate of the soil. Thus, the soil/plant conditions and field slope were well matched to optimal performance for LEPA systems. Runoff and/or redistribution due to reduced uniformity from local runoff were minimal. Thus, the losses for the experiment reflect losses due to evaporative effects and not runoff or nonuniformity.

The evaporative losses must be considered relative to the depth of water applied. The study used an application depth of one inch, resulting in a 4% or 0.04-inch loss after the sprinkler had passed—i.e., while the canopy dried. The water loss after irrigation as the canopy dries is unrelated to the depth of water applied as long as the canopy is thoroughly wetted. Thus, when only 0.5 inches is applied, the loss would still be 0.04 inches, resulting in an 8% loss.

Distinguishing Losses from Transpiration and Evaporation 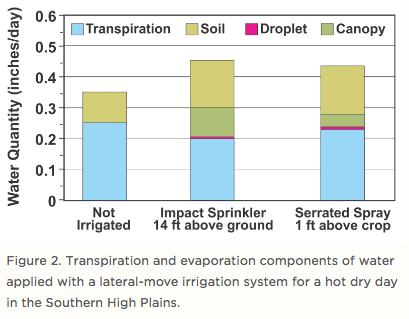 Irrigation also increased soil evaporation for the day of irrigation. The increase in soil evaporation above that for the nonirrigated area was about 0.05 inches/day for either sprinkler device—note that evaporation from wetted soil may extend beyond one day. These results are representative of a typical system during a near normal day in the Southern High Plains; however, different systems and days would produce different results.

Sprinkler package design can affect many of the water pathways shown in Figure 1. Designs should consider how to minimize losses while considering effects on the overall function and economics of the system. For example, evaporation of water while drops travel through the air is strongly affected by the size of the droplet. Large drops are less affected by wind and evaporate at a much smaller rate than drops smaller than 0.04 inches in diameter. The newer sprinklers are much better at controlling the size of drops, allowing for minimization of droplet evaporation while avoiding damage to unprotected soils.

Research shows that even in a hot dry windy climate like the Southern High Plains, the water loss from the sprinkler to the soil is small and a small amount of runoff that causes water to move within the field will more than offset gains from locating sprinklers in the canopy. The primary objective for the sprinkler package must be to have the water infiltrate into the soil at a high enough uniformity so each plant has an equal chance to access water.

Highlights from Day 1 of the 2016 Farm Progress Show