Revised 2018 corn and soybean budgets are available in the management section of farmdoc (here). The major revision was to commodity prices. A $3.60 per bushel corn price and $9.60 per bushel price are now used in budgets, closely matching current fall delivery bids. Those prices are higher than in the July 2017 release. Still, the revised budgets suggest low returns and soybeans still are projected more profitable than corn. 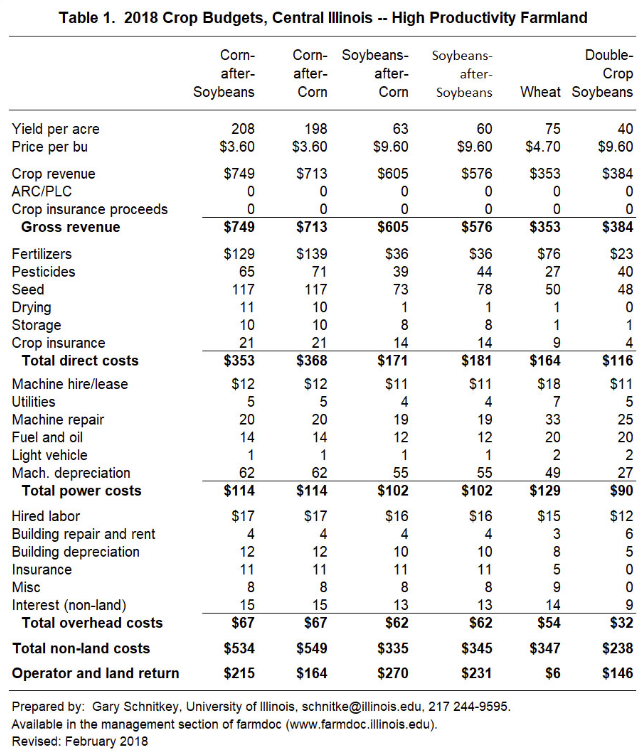 For all regions, budgets are based on historical values from grain farms enrolled in Illinois Farm Business Farm Management (FBFM). Historical values for the regions are shown in "Revenues and Costs for Corn, Soybeans, Wheat, and Double-Crop Soybeans", a publication available in the management section of farmdoc. Historical values in FBFM are updated to current conditions based on changes in commodity and input prices.

Budgets do not represent a specific production system. Rather they represent the average of all costs and revenues of farms enrolled in FBFM.

Corn yields in the corn-after-corn budgets are ten bushels lower than corn-after-soybean budgets, representing a typical yield drag from corn following corn. The yield drag can vary from year-to-year, with a much larger yield drag often occurring in stressful years like drought years.

Negative returns are projected for cash rented farmland at average cash rents, given that yields are at trend levels and prices are near fall delivery prices. For farms to be profitable on corn-after-soybeans, either yields or prices must be higher. Take a $300 operator and land return as an example. A $300 return would allow payment of a $260 cash rent and a modest return for the farmer. For corn-after-soybeans to generate a $300 return, yields would have to be 231 bushels per acre, given that all other prices and costs are as shown in the budget. That yield is close to the exceptional yields of 2016 and 2017. Alternatively, a $4.00 corn price would generate a $300 per acre return given a 208 bushel per acre yield and $534 of non-land costs shown in the budgets. As noted previously (farmdocDaily, Jan. 30, 2018), either exceptional yields or above $4.00 corn prices are needed for reasonable returns in 2018.

Corn Versus Soybeans
Soybeans are projected to be more profitable than corn, similar to results for all years since 2013 (farmdoc daily, July 25, 2017). Soybeans-after-corn is projected to have a $270 per acre return compared to $215 per acre of corn-after-soybeans.

Summary
Budgets for 2018 depict a low to negative return environment for corn and soybean production in 2018. These projections do not differ greatly from projections made in 2016 and 2017. Similar to 2016 and 2017, high yields again could lead to higher returns. Alternatively, higher prices could occur. However, neither of those situations are foregone conclusions. A very poor income will result if prices do not increase and yields are close to historically expected levels.

Soybeans are projected to be more profitable than corn. Again, these projections do not differ from those in recent years. Illinois farmers have been shifting to more soybeans. In central Illinois, additional risks associated with soybeans-after-soybeans production may not outweigh the additional projected returns from soybeans-after-soybeans. Perhaps more important, corn-after-corn does not seem like an economical alternative in 2018.