Researchers with Agriculture and Agri-Food Canada are in the process of identifying and describing a tiny midge species that was first confirmed in canola fields in parts of Western Canada last year.

It’s not swede midge, as was previously thought. This new species belongs to the same Contarinia genus, but is more robust, has hairier wings and slight differences in antennae and genitalia compared to the swede midge.

And as of right now, it doesn’t have a name.

The first clue that this was a different species came when pheromone bait in traps failed to attract swede midge in Saskatchewan, but worked perfectly fine in Ontario, where swede midge is a significant pest, explains Meghan Vankosky, entomologist with Agriculture and Agri-Food Canada in Saskatoon, in this Canola School video.

From there, a closer look at the insect’s morphology and a molecular DNA test confirmed it wasn’t swede midge they were dealing with, she says. 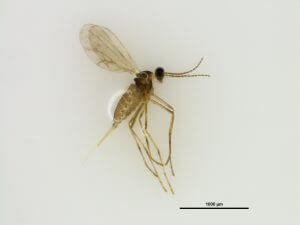 Vankosky’s colleague at the Saskatoon Research and Development Centre, Boyd Mori, is currently working on a publication to identify and give this mystery midge species a scientific name.

“Once that publication is out, then we can actually talk about it in terms of a name,” she notes.

In the meantime, they’re trying to determine where this midge species is found on the Prairies and what kind of impact it might have on canola production and yields. The only confirmed symptom of damage is “bottle”-shaped, galled flowers, which do not produce pods or seeds (see above and left), caused by larvae feeding on growing points.

Swede midge was first identified in Saskatchewan in 2007, but as Vankosky notes, it has not been detected in the last few years, leading to the possibility that damage thought to be from swede midge may have actually been caused by this newly-discovered midge species.

Check out this Canola School episode, filmed at the 2017 Canola Discovery Forum in Saskatoon, for the latest on this yet-to-be-named midge species.

Solving the Mystery of Heated Canola