It’s not every day United States history mixes with microbes in the soil. But when the turf on the National Mall in Washington, D.C. was replaced, it offered scientists the opportunity to study changes in the soil underneath.

The work focused on the bacteria present in the soil. To the researchers’ surprise, the communities of microbes did not change a lot before and after the renovation. These communities in the soil are known as the soil micro-biome.

“My lab is interested in how microbes can move around in the environment, and how they change and adapt as a result of this movement,” explains Jo Anne Crouch, a USDA-Agriculture Research Service researcher. Crouch is lead author of the study. “We thought that the new ‘imported’ turf from New Jersey would introduce different communities of bacteria to the National Mall. However, we found that they weren’t significantly different.”

Crouch’s work focused on turf grass, defined as a large area of green grass. It is made up of the grass, its roots, and the soil and microbes found with them.

Think of the soil micro-biome as similar to the collection of microbes found in the human gut. When the microbes are out of balance, it can make someone sick. Crouch says it’s the same for the soil microbiome. Many of the worst diseases in crops or other environments are linked with changes in the soil microbiome. This is why it’s important to research how changes like those at the National Mall affect the microbes underneath the turf. 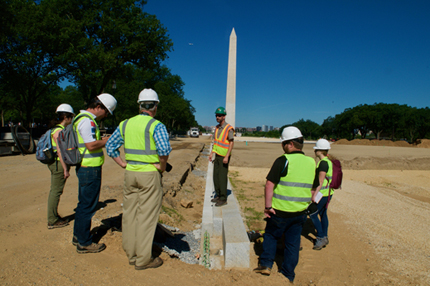 “There is a lot of interest in the management of helpful plant-associated organisms as allies to keep plants healthy and fight against disease and pests,” Crouch says. “Many microbes have long been appreciated for their ability to help plants stay healthy, either through better nutrition or defense.”

For their study, Crouch’s team and University of Maryland turfgrass pathologist Joseph Roberts looked at soil bacteria before and after the renovation. Using laboratory tests, they used the bacteria’s DNA to try to figure out exactly what types of bacteria were present. There were some differences in the microbes present, but not enough for the researchers to say the renovation had a big impact on the bacteria.

They also found a lot of variety in the bacteria. For example, bacteria that break down nitrogen in the environment were heavily present, as were bacteria common in human-affected environments. Over 1,600 different species were detected.

“We were surprised by the outcome, as we thought that the micro-biome would experience big changes, and that just wasn’t what the data showed,” Crouch says. “However, there is still much to learn about how issues like this impact microbes that are paired with plants.”

Additionally, Crouch says that even though the changes between the soil samples were small, scientists are also starting to appreciate that sometimes a really important microbe is a rare one. This means it would be hard to detect but could greatly affect how the groups function as a whole.

“Agricultural areas and other natural spaces are highly vulnerable to negative changes,” she says. “Micro-biomes offer a new and almost entirely untapped opportunity to influence interactions among plants and microbes to improve plant productivity and health.”

Read more about this research in Crop Science. The USDA Agricultural Research Service funded this research. Much of this research was conducted by Zakiya Carter, then a high school senior, as part of Maryland’s Prince George’s County Science and Technology Internship Program.