With warming temperatures and March upon us, many growers are looking toward their summer crops and starting to think about acreage and planting decisions. While there has been much concern over the last several years about the increased presence of the sugarcane aphid, growers should know there are several things that they can do now and in the next several weeks to maximum sorghum growth and productivity while minimize the impact of these pests.

Hybrid selection is probably the most effective and cheapest way to help manage against sugarcane aphids. Through the last several years, many hybrids have been identified to have varying degrees of tolerance to sugarcane aphid pressure.

Below is the current up-to-date list of tolerant sorghum hybrids that have been both proven in university trials and are currently commercially available.

While selecting a tolerant hybrid is increasingly important, it is only the first step. Timely planting can be argued to be the most important step into a successful grain sorghum crop in Oklahoma.

Timely planting will greatly improve sorghum yields. The major contributing factor to this is trying to avoid having critical sorghum growth stages during sub-optimal times of the year (i.e. sorghum flowering and grain fill during the end of July and the first of August).

Outside of the panhandle, the optimum time for planting sorghum is typically from early April through early May. The further into May growers plant, the risk is increased that they will be pairing flowering or grain fill during hot, dry conditions.

It must be stated that this is only a guideline and some years May plantings will produce suitable yields; however, the risk associated is typically much higher compared to earlier planting. Recent work at Oklahoma State University (multiple locations across northwest Oklahoma) documented at nearly 30% decrease in crop yield associated with Mid-May plantings compared to Mid-April.

The benefits of earlier planting are more evident in current production systems due to the sugarcane aphids. With earlier plantings, growers should be looking for the crop to reach the later stages of soft dough or hard dough prior to infestation. This makes these pests only a minor yield limitation, compared to earlier infestations. These pests will still have to be managed at harvest but yield in field is less impacted.

Historically, if growers could not plant during the month of April, it was advised to delay planting until June. However, with increased presence of sugarcane aphids, this will not always successfully save the crop. Additionally, compared to years ago, double-crop planting has become a riskier practice. 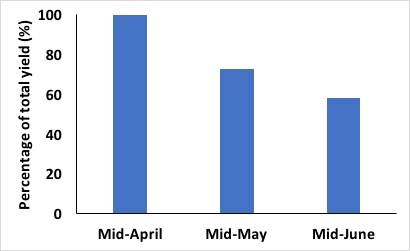 This is because by the time the crop has reached the critical reproductive stages, sugarcane aphids will have built up on full-season sorghum and heavy infestations will be more impactful on these younger (already highly stressed) plants.

This does not mean double-crop production is not worth considering, but other critical management practices (i.e. tolerant hybrids and timely chemical applications) become more critical than with full-season production systems.

Overall, proper agronomic management can help a sorghum crop that would otherwise not provide suitable or profitable production.  These, however, are not silver bullets and will solely help growers minimize potential risks associated with sorghum production and sugarcane aphids.

Be on Guard for Sugarcane Aphids in Sorghum