Mike and Robert McClellan keep their soils healthy and productive with intensive rotations, elimination of summer fallow and double cropping.

(The following is an excerpt from the Leading Edge magazine published by No-till on the Plains between 2001 and 2010. The entire article was originally published in January 2009 and can be found on the No-till on the Plains website, www.notill.org. Now seems to be a good time to revisit some of the principles employed by McClellan farms.)

Mike McClellan and his father, Robert, farm in the vicinity of Palco, Kan., about 40 miles northwest of Hays. Other than Mike’s financial rigor, perhaps the most striking thing about their operation is the aggressiveness of cropping patterns, which were intensive during the drought and more intensive yet with recently abundant moisture.

Since going full no-till in 2000, McClellan’s crop rotations certainly have evolved. Initially, Mike and Robert tried to use the same rotation they’d used in their tillage system (wheat >>milo >>summer-fallow), by simply replacing all tillage with herbicides.

Mike explains, “The chem-fallow caused several problems including loss of residue, increase of prairie cupgrass and sedges, and very hard ground—and the patches of cupgrass and sedges just kept getting bigger and bigger.” Mike continues, “Now our basic rotation is two years of wheat, and from wheat we go to milo for two years. Then the challenge is to go from milo back to wheat (using a cash crop instead of summer fallow).

“So far we have been doing soybeans, sunflowers, oats, and this year we tried some field peas. Once I go out of a crop, I like to be out of it for three years before I go back to it for (a break of) disease cycle and weed pressure.”

McClellan’s have had zero summer fallow for about four years now. Mike says, “Thinking about [having] something growing every year, I always think of the quote, ‘Idle hands are the devil’s tools.’ I kind of convert that to idle lands are the devil’s playground.” He summarizes thusly: “The secret to no-till, in my opinion, is crop rotation. You can’t just do what you were doing. When problems arise, learn how to deal with them through rotations.”

In 2008, another of McClellans’ fields of harvested wheat was double-cropped to forage sorghum intended for hay. The forage sorghum showed significant N deficiency, and Mike suspects the fertilizer was tied up in the residue instead of being available for the hay crop because it was sprayed on with a burndown (he says he should have streamed the N instead).

Nine inches of rain after swathing delayed baling until December, so the quality wasn’t great. It was swathed at the highest setting on the swather to leave as much residue as possible, although Mike says, “I don’t like how the field looked after the hay was off. There wasn’t much wheat stubble left.” (Editors’ Note: Spraying liquid N likely accelerated decomposition.) And it froze shortly after swathing so not much regrowth occurred. Mike says, “(Double-crop) sunflowers are a better option. There’s lots of wheat stubble left after the sunflowers — where the wheat was actually harvested for grain.”

Are McClellans’ intensive crop rotations paying off? In 2008, their second-year milo averaged 95 bu/a, while the milo planted in the wheat stubble made 135 bu/a. However, Mike notes, “The second-year milo is still very profitable.” The double-crop sunflowers netted about $150/a when Mike figures costs using custom rates for planting, harvesting, and trucking.

His current thoughts are that he would only plant double-crop sunflowers again if grain prices were relatively high and he had soil moisture at wheat harvest, so they will be something of an ‘opportunity crop’ for him. Mike notes that some years may actually provide better double-crop sunflower yields, since he had uneven stands this year, plus losses from excess moisture — about 10% of the acres drowned out. 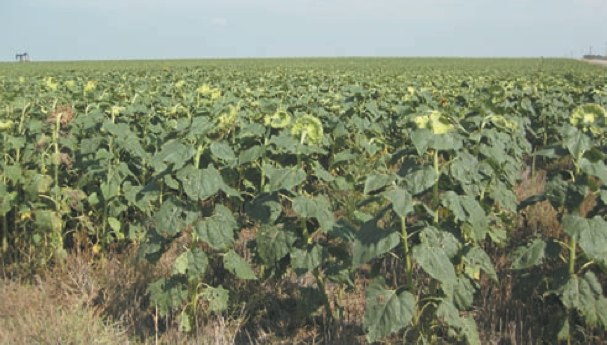 While the effects of the double-crop on the following crop remain to be seen, Mike views this as a further exploration of rotational options to solve problems (in this case, excessively wet soils).

He is intrigued with cover crops, although he says, “It’s really a different mindset to look at profitability over 3 to 5 years versus year-to-year. Although maybe there’s enough to be gained in the first year after a cover crop to make it pay.” Mike is kicking around the idea of using cover crops for some second-year wheat stubble, particularly ‘cocktails’ that would include turnips or radish plus a legume.

Mike grew up on the farm and helped with the work until attending Kansas State University, graduating in 1984 with a Bachelor’s in Ag Economics. After college, his  father wanted him to work off the farm for a couple of years before coming back to the farm, so Mike ended up in the banking industry from 1984 until his return to the farm in 1995. Of his banking career, Mike says, “It’s good experience for someone wanting to farm to sit on the other side of the desk for a while.” With the roller-coaster farm economy in the 1980s, Mike got a bird’s-eye view of what can go wrong in a business sector when excess optimism reigns.

Mike expresses caution (and exercises extreme discipline) in the face of recent euphoria by grain farmers: “Anytime farmers make a little bit of money, they figure out how to spend it. We go out and buy new machinery and bid up cash rents. The money we make, we end up spending, and it doesn’t take long for the costs involved to increase to the income we have.”

As for no-till on their farm in the mid-1990s, only an occasional milo crop was planted this way. Mike became increasingly interested in continuous no-till by watching several neighbors, and by attending no-till field days and the No-Till on the Plains conferences.

At the outset, Mike notes, there were issues in identifying seeding equipment that would work adequately in no-till. In the ’90s, they experimented with no-till using a Flexi-Coil hoe drill, with limited success.

McClellans’ seeding is now done with a 30-foot Deere 1890 air drill. Mike says this unit does a good job but requires greasing much more often than recommended by the manual — to keep the dust and rust out of the firming and closing pivot points.

Mike’s 1890 plants their wheat, milo, soybeans, and hay crops, with all of these in 10-inch rows (he’s considering 20-inch for milo and soybeans). The 1890 is stock except for Case-IH SDX firming wheels which fit into the seed slot and do a much better job of firming the seed into the bottom of the furrow.

For wheat the McClellans plant 80 – 120 lbs/a of seed depending on lateness. Dry fertilizer is applied in the seed row at 30 – 80 lbs/a of (Cargill) Mozaic’s MESZ (“MicroEssentials: Sulfur / Zinc” —prills compounded with N & P). Nitrogen is applied in the spring by streaming liquid with their Apache sprayer, based on needs calculated from soil tests.

For milo, Mike reports, “I use all Gaucho-treated seed, which I think helps tremendously. I think we were having some wireworm problems and didn’t know it, because my stand is more uniform than it ever has been, and I’ve dropped my population from 60,000 or 70,000 seeds/a, and now I’m down to 45,000 or 50,000.” (Editors: Some  of this may be due to seed vigor; usually only the high-vigor seed lots get Gaucho or Cruiser treatment.)

In 2008, McClellans’ soybeans were all treated before planting with Optimize inoculant, going in at 130,000 seeds/a. While they normally use maturities of 3.0 – 3.4, this year they went as high as 3.8 — with the cool wet summer, the late-planted beans (and milo) barely finished. McClellans’ average soybeans yields have been around 30 bu/a, although their ’08 crop made 43.

For McClellans’ region, primary crop sunflowers present a problem when used in place of soybeans in the rotation. Mike thinks it’s imperative to get flower fields seeded to wheat, otherwise there is too little residue to hold the soil the following spring.

However, in the fall it’s often too dry to get a wheat stand in the sunflower stalks. On years with lack of timely rain, wheat after soybeans can be troublesome enough for them, which is partly Mike’s reason for experimenting with field peas and oats, especially on poorer soils.

McClellans’ region averages about 19 inches of precipitation a year. From the late 1990s until about 2005, they were battling conditions that were too dry. In 2008, they’ve been on the opposite side of the moisture ledger.

Mike says they normally plant and spray over terraces, but with terrace channels full of mud and water, this wasn’t possible.

Asked if terraces were still necessary with no-till, Mike replies, “Yes, absolutely. We may do some reshaping of terraces so they are easier to farm over, but we definitely still need them. Even with terraces, we still get some gullies that wash out and we have to go back and patch them.”

Some of McClellans’ acreage is cash rented and some is share-cropped. The rate of cash rent per acre has increased along with grain prices, but Mike thinks that is only fair.

He prefers to cash rent, as it gives him an opportunity to try different things like double-cropping  and maybe something out of the norm for crops in general. When crop-sharing, Mike feels more of  an obligation to stick with what has been proven. When the McClellans first began no-tilling, there was resistance from some share-crop landlords due to increased fertilizer and herbicide costs, although as returns have increased with no-till, this has ceased to be an issue.

The McClellans accomplish their spraying using an Apache with a 90-foot boom and 1000-gallon tank.

The sprayer has guidance and auto-boom control, which have proven beneficial for increasing sprayer efficiency. To keep the spraying operation running smoothly (with fields spanning a distance of about 30 miles), a semi trailer is equipped with nurse tanks for water and fertilizer, an area for chemical shuttles, a clean water shuttle for rinsing, and a pressure washer to clean the sprayer in the field.

Going from full tillage to pure no-till with chem-fallow, then eliminating summer fallow, to now trying double- cropping, has been an evolutionary process for Mike and Robert. Mike credits much of their success in these changes to good advice from other no-tillers.

Two he mentions in particular are Alan States, who farms in the Logan area and later became a banker at Hays (Mike is currently on the board of directors for States’ bank), and John Griebel of Stockton, Kan., whose work with cover crops has been inspiring Mike. Regardless of the source of ideas, Mike is certain to be continually striving to improve his farm’s profitability. You can bank on it.

It’s the People, not the Pocketbook, that Matter

It’s Not Just About Today