By Laura Barrera posted on December 17, 2016 | Posted in Cover Crops

Regardless of the rotation or the time of year, Stefan Zehetner is learning and helping other growers determine where cover crops have a place in southwestern Ontario.

When Stefan Zehetner’s father, Eduard, emigrated from Europe to Canada in 1986, the soil on his family’s farm in Austria was dead.

“It was a sugarbeet farm and on a very tight rotation. They’d plow the farm two to three times a year,” Stefan says. “When my father left he said there were no earthworms and it was getting pretty hard to work with. The yields weren’t anywhere near what they were when my grandfather was farming.”

Shortly after Ed left Europe, the sugarbeet factory closed and his grandparents returned to a regular rotation that included cover crops. As Stefan visited his family in Austria over the years, he noticed the improvements that occurred on the farm.

“It can produce more corn than we can here, and it wouldn’t have been that way 20 years ago,” he says. “We watched that turn around over there and said, ‘We should be doing something like that here, too.’”

After seeing cover crops also work in South America, Australia and New Zealand, Stefan decided to purchase some cover crop seed for himself and his neighbors in Hensall, Ontario, eventually turning it into a full cover crop seed business.

Five years later, Stefan now sells over 30,000 acres for his business and is experimenting with multiple cover-crop species to determine what works successfully in his climate. He’s also raising vertically tilled corn and no-till soybeans and wheat with his father on 1,100 acres.

The Zehetners first trial run with cover crops was an 8-way mix Stefan put together that included oats, cereal rye, sunflower, sorghum, forage peas, radish and a couple other species after wheat.

But after seeing the amount of fall growth, Ed worried it was going to hurt them in the spring and they tilled it down. Stefan decided to leave an untilled strip there, and by the time planting rolled around the cover crops were winterkilled and decomposed. It was enough to convince Ed to give them a try again the following fall.

The second time they stuck to a simpler mix before working their way back up to higher diversities. In September 2016, Stefan had 32 species out in one field for a customer appreciation day.

“I’m not really scared of most cover crops, as long as I know how to manage them,” he says.

For southwestern Ontario, he’s found the following species to be the most effective:

Stefan says most of these species can go in after winter wheat or soybeans if the crop is harvested early enough. Following corn, cereal rye can be seeded on top of cornstalks until the end of November.

“You might not see it emerge in the winter. I sometimes spread it right on top of the snow, but come springtime it seems to always be there,” he says. “It amazes me every year how well that works.”

On the Zehetners’ own farm, some of their fields don’t always see a cover crop in the fall, but they’ve been working at getting them seeded in the spring. 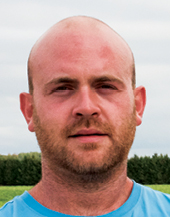 “We always have one or two farms where we’re trying to get rid of some weeds and we want to do a late-season burndown, and sometimes we don’t get any cover crops put on,” Stefan says.

Due to a lack of rainfall this spring there was limited growth for his spring-planted covers, but last year he got over a foot of top growth and they were easy to plant into. He adds that the no-till drill also left the field very mellow and chewed up some of the corn stalks, making no-tilling into it with a planter a breeze.

Stefan and Ed have been planting almost all their soybeans into green cereal rye or annual ryegrass. They prefer to terminate covers within 24 hours after planting, and Stefan says he hasn’t had a problem getting the cover killed in time.

The Zehetners usually use a liter of glyphosate per acre mixed with a little 2,4-D to terminate covers and clean up any broadleaf weeds. Sometimes they’ll use Pursuit or another Group 2 herbicide to provide a residual, but Stefan is trying to get away from those because they seem to be affecting the covers he wants to seed after harvest.

But thanks to cover crops, they may not need as much herbicide anyway.

“Where we had a really good stand of rye we just burnt it off with Roundup, 2,4-D and a little bit of Pursuit, and those soybeans stayed clean all season,” Stefan says. “That almost cut our chemical bill in half on those conventional soybeans. So if we are continually able to do that, it will help prove the economics of cover crops.”

He’s also interested in doing some intercropping with his soybeans and cereal rye. He’d like to seed the rye in twin rows so it can grow a little longer and possibly allow him to plant his soybeans a little sooner, instead of waiting for the rye to head out.

Interseeding into corn is another cover crop practice Stefan and several of his customers have adopted. If it’s going into corn before soybeans, he likes to interseed annual ryegrass, crimson clover and rapeseed at the three- or four-leaf stage.

“As long as it’s not going to rain, I have no problem putting it on at the three-leaf stage around there, as long as the field’s clean,” he says. “It’s not going to come up unless we get a rain anyways.”

The typical planting date for their corn is around the end of April and first week or two of May, and they’re usually harvesting it in late October into November.

He admits that timing is a little early, but he needs to make sure the equipment is working before he starts interseeding for his customers. Stefan works with his neighbor, who has a 40-foot Valmar air seeder and is in the process of expanding it to 80 feet.

In most years they receive more than enough precipitation, especially during planting season, and broadcasting the seed between the corn rows has been fine. But this year the weather turned dry, and Stefan says growers who were able to get their seed placed into the soil via a double-disc opener or coulter had more success.

“But I’ve been doing it for 5 years now and this year is probably my first year that was close to a complete failure on certain acres,” he says.

“That seems to be a pretty good opportunity for somebody that’s corn-on-corn to get a legume into that rotation,” he says.

He adds that most of the continuous corn in his area is silage corn, so it comes off early enough that there’s some time for the clover to grow in the fall and accumulate some biomass.

While clovers may work well in a corn-on-corn rotation, Stefan does not recommend them before conventional soybeans.

“It’s tough to get rid of those clovers in springtime without the proper chemistry,” he says. “They have their place, and I think they can help diversify your farm.”

Stefan plans to keep trying new things with covers, starting with an equipment project he’s hoping to take on this winter. 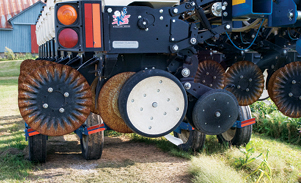 Twin-Row Corn and the Quest for 100% No-Till

To read more about the Zehetners’ quest for no-tilling their corn and why they moved to a twin-row system, click here.

He plans to take the box off of his John Deere 1560 no-till drill and replace it with an Aulari air-delivery seeding unit, so that he can bio strip-till his cover crops.

“So let’s say on soybean ground that’s going to corn, I can go over that field once with the drill and I can have two rows placing MAP and ammonium sulfate and two rows placing potash,” he says. “With RTK, I can just slightly offset it between those rows and have dry fertilizer banded in the ground where I want it.”

Stefan believes growers will see more regulations coming from the government on fertilizer applications and he’s worried agencies will require tilling it in. He’s trying to be proactive about getting fertilizer in the soil now with minimal soil disturbance.

He also likes that a drill pass will still warm up his soil where he’ll be planting, but won’t work the entire top inch, which is what he’s currently doing with his vertical tillage tool.

Stefan says in their climate they have to work their soil some, as no-till corn hasn’t been overly successful in the past. He would like to do strip-till corn, but since they’re planting in twin rows, it makes it a bit more challenging.

“It’s just enough disturbance that if I leave that for 12-24 hours, or at least 6-24 hours, to let that air and wind get in there, then I can pretty much no-till or semi no-till my corn, and that’s hopefully my stepping stone to get to 100% no-till in our colder climate,” he says.