Figure 1. Keep a careful eye on soybean moisture as the crop dries down. What appears to be wet from the road may be dry enough to harvest. Soybeans on the right are the same variety but had a fungicide application, thus are staying green longer.

If it’s greater than 13% there is a moisture dock on the scale ticket for delivering wet beans, resulting in a lower price per bushel. If it’s less than 13%, there are fewer “bushels” to sell rather than a dockage on the ticket. There are fewer bushels because the load weight is divided by 60 pounds per bushel (assuming 13% moisture) rather than by the actual pounds per bushel for the moisture content of the beans at the time of delivery 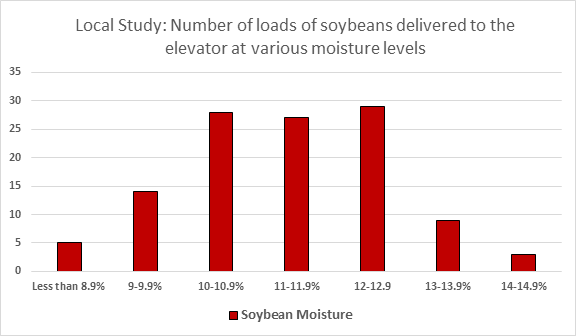 What difference does harvesting and selling soybeans at 8% or 9% compared to 13% moisture mean to your bottom line?

So what can you do? Everyone knows that it is impossible to harvest all your soybeans at exactly 13%, but that should be your goal. Consider these soybean harvest tips:

2. Begin harvesting at 14% or 15% moisture. What appears to be wet or green from the road may be dry enough to harvest. Try harvesting when some of the leaves are still on the plant as the beans may be drier than you think. Soybeans are fully mature when 95% of the pods are at their mature tan color. The moisture driven from the wet beans in the bottom of the bin will help rehydrate any dry beans in the top of the bin.

3. Harvest under optimum conditions. Moisture content can increase by several points with an overnight dew or it can decrease by several points during a day with low humidity and windy conditions. Avoid harvesting when beans are driest, such as on hot afternoons, to maintain moisture and reduce shattering losses. Harvesting immediately after a rain, if field conditions allow, will result in higher moisture contents.  However, several wetting and drying cycles from rain events will make the soybeans more susceptible to shatter losses from pods splitting open.

4. Avoid harvest losses from shattering by harvesting before the beans become overly dry. Four to five beans on the ground per square foot can add up to 1 bushel per acre loss. Many times, the dock for delivering beans over 13% moisture content may be less than the shatter losses from harvesting overly dry soybeans.

5. If there are green leaves and green pods in the grain, they are considered foreign matter at the marketplace which can result in dockage. If placed in on-farm storage, they can cause challenges in a grain bin at the edges. Avoid dockage and spoilage by doing the following:

6. Don’t place “all of your eggs in one basket” when it comes to selecting the maturity of soybean seed at planting time. Select your varieties and schedule your planting to spread out plant maturity and harvest. Plant your early maturing varieties first.

Good luck and hopefully you'll have a safe harvest and an excellent crop of 13% moisture soybeans.