Goss’s Wilt Beginning to Show up in Corn

By Emmanuel Byamukama and Connie Tande

A number of corn fields scouted in several counties were found with Goss’s wilt symptoms. Both incidence and severity of Goss’s wilt were low. Goss’s wilt is caused by a bacterial pathogen, Clavibacter michiganensis subspecies nebraskensis.

Goss’s wilt symptoms include long, tan-gray lesions with wavy margins, found in the center of the leaf or along the edges of the corn leaf blade (Figure 1). These lesions can coalesce to form larger lesions.

Goss’s wilt can be confirmed by the dark green to black, discontinuous, water soaked spots (freckles), (Figure 2). When these “freckles” are observed against the light, transparent spots can be seen.

Although this disease is commonly referred to as Goss’s wilt, the phase being seen at the current corn growth stage is the leaf blight phase. The wilting phase occurs when corn is infected early in the growing season.

The pathogen can also survive on seed (very low levels, <0.5%) and therefore seed can serve as a source of inoculum, however, corn residues are by far the main source of the inoculum.

Goss’s wilt bacteria are spread through rain splash but can also be carried in aerosols for a considerable distance. Infection is favored by rainy weather especially where high winds, hail, and sand blasting occur. 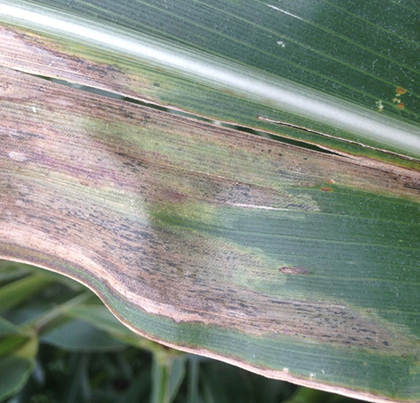 The most effective tool for Goss’s wilt management is planting resistant corn hybrids.

Seed companies provide ratings for corn hybrids, therefore select hybrids with resistance to Goss’s wilt especially when planting in fields with a history of Goss’s wilt.

Other practices that reduce the risk for Goss’s wilt include crop rotation and tillage.