Last week, we received a few reports from northwest Ohio of twisted wheat flag leaves.  Twisted wheat leaves could be a result of either cold temperatures or 2,4-D herbicide damage. To determine the cause of the twisting, consider patterns in the field, recent weather and herbicide program.

Three things to consider about a freeze event: How cold was it? How long was it cold? and What growth stage was the crop?

A frost is when a layer of cold air settles into low areas, reducing temperatures below the dew point, often just above or below 32 F. This causes water to be released from the air and freezes on cold surfaces. A freeze is when a body of cold, dry air moves in and temperatures drop below freezing, often accompanied by a breeze. In wheat, a hard frost can often burn leaf tips, but a freeze can damage leaves, heads, stems and even kill the growing point. The length of the freeze can also increase the severity of the damage.

As wheat breaks from winter hardiness, it loses cold tolerance with each growth stage. In our current freeze study, wheat plants were collected from the field at different growth stages and subjected to five different temperatures: 39 F (control), 27 F, 21 F, 14 F and 5 F. At Feekes 5 (erect growth) and 6 (first node), it could endure temperatures as low as 5 F and 14 F. At Feekes 8 (flag leaf visible), wheat was able to tolerate temperatures of 24-25 F. 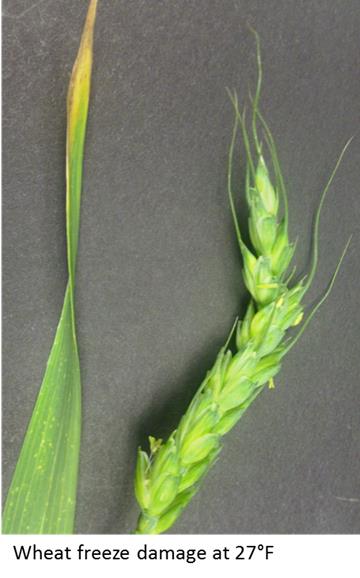 The picture on the right is wheat subjected to 27 F for 15 minutes at Feekes 9 (flag leaf fully emerged). Ten days after the freeze, more than half of the flag leaves were severely damaged with twisting, yellowing and death. The flag leaf accounts for 75% of the plant’s photosynthetic source for seed fill, so depending on the extent of damage, yields may be reduced.

Another common symptom of freeze damage at this stage is the head becomes lodged in the leaf sheath and breaks as it is forced out. This can impact seed formation and seed fill, also reducing yield. This damage starts to occur at 30 F. Growers are urged to monitor the health of the flag leaves after any freeze to determine crop damage.

Late applications of 2,4-D can cause injury to wheat and yield loss. Some 2,4-D labels specify that application should occur before jointing, but others allow application after jointing but before early boot stage. In our limited research on this, we have not observed yield loss from 2,4-D applied prior to early boot stage, except when UAN was used as the spray carrier. It is possible to have yield loss occur from a late application, without really seeing symptoms such as leaf twisting.