Fixing Nitrogen for the World

One of the Agricultural Research Service’s more unusual germplasm collections is devoted to Rhizobium, bacteria that form symbiotic relationships with soybeans, alfalfa, peanuts, beans, and other legumes to convert nitrogen gas from the air into fertilizer for the plants. This process is known as “nitrogen fixation.”

The oldest part of the Rhizobium collection dates back to samples taken more than 100 years ago at the U.S. Department of Agriculture’s Arlington Farm, now the site of the Pentagon. Although informally a collection since 1913, it was formally established as the ARS National RhizobiumGermplasm Resource Collection in 1975 and is currently part of the Soybean Genomics and Improvement Laboratory at the Beltsville Agricultural Research Center in Maryland.

Driving the formalization of the collection was the 1973 oil embargo and the associated energy crisis, which highlighted the fact that petroleum-based nitrogen fertilizers were limited resources for food production. This emphasized the need to rely more on biological nitrogen fixation for global food security. As a result, the U.S. Agency for International Development provided the original funding to establish the national Rhizobium collection. While petroleum-based nitrogen has remained readily available and production costs have declined, reducing reliance on these fertilizers is still important. Biological nitrogen fixation is also key to growing organic crops.

Today, the National Rhizobium Germplasm Resource Collection has more than 5,000 curated specimens. An additional 5,000 strains have come from other collections around the world and will be incorporated into the national collection.

“The collection’s role in preserving the diversity of Rhizobium is essential, because it would be extremely difficult and prohibitively expensive to re-isolate an exact replica of a particularly useful strain from nature in the event of its loss, if it is possible to do at all,” says ARS microbiologist Patrick E. Elia, who curates the collection. And losses do occur. For example, Elia helped arrange the return of more than 200 strains of alfalfa rhizobia indigenous to Iraq when its collection was destroyed during the second Gulf War. 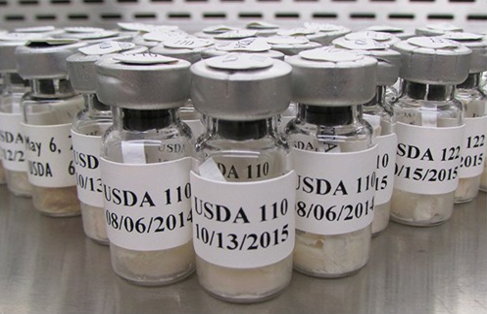 These vials hold samples that are part of the 5,000 curated specimens in the USDA-ARS Rhizobium collection in Beltsville, Md.

Other rhizobia have been sent as far as space, when strains were supplied to the Kennedy Space Center for nitrogen fixation studies on the space shuttle.

Researchers also evaluate strains to understand how they are related and to determine how they could best be used in agriculture. Elia and now-retired ARS microbiologist Peter van Berkum developed a DNA sequencing technique that can genetically identify different strains ofBradyrhizobium, the rhizobia that are symbiotic with soybeans. “This will give us insight into the true diversity of the Bradyrhizobium population in the field,” Elia says.

The technique is also answering another long-standing question: Are the bradyrhizobia in U.S. soils native to the Americas, or were they introduced along with soybeans from the Far East? Soybean was first introduced into colonial America in 1765. When its potential as a food crop was realized, USDA plant explorer Frank Meyers was sent to bring soybean germplasm from its area of origin to the United States during several collecting trips around 1900.

“It looks like there were native North American Brady rhizobium strains that were associated with native American legumes like Apios americana (American groundnut) before soybeans were brought here,” Elia says.

Because rhizobia are highly diverse and can vary widely in their ability to fix nitrogen, Elia offers advice to other researchers and stakeholders about strains, their crop specificities, and their environmental suitability. He also provides protocols in microbiology and methods for scaling-up rhizobial inoculant production.

For example, to assist a joint USDA and N2Africa project to improve soybean production in Ghana in 2014, Elia carefully selected a mix of several strains from the collection that he thought could provide excellent nitrogen fixation, work well in an agricultural system that does not use mechanized farming equipment, and survive the area’s harsh climate.

Over the next several years, Elia will be examining brady rhizobia recovered from soybeans harvested from the test areas in Ghana to see which of the strains survived and settled into the soybeans well.

Returning Nitrogen to Soils Without Chemicals