With wheat topdressing season soon approaching, growers may be wondering if it would pay to add chloride to their topdressing blend this year. Chloride is a highly mobile nutrient in soils and topdressing is typically a good time for application, especially in regions of sufficient precipitation or with coarse texture soils that may cause leaching.

One of the main benefits from good chloride nutrition is the improvement in overall disease resistance in wheat. Wheat response to chloride is usually expressed in improved color, suppression of fungal diseases, and increased yield. It is difficult to predict whether chloride would significantly increase wheat yields unless there has been a recent soil test analysis for this nutrient. Chloride fertilization based on soil testing is becoming more common in Kansas.

As with nitrate and sulfate, chloride soil testing is recommended using a 0- to 24-inch profile sample. Based on current data, the probability of a response to chloride in dryland wheat production in northeast and central Kansas seems higher than in western Kansas.

The interpretation of the chloride test and corresponding fertilizer recommendations for wheat are given in the table below. Chloride fertilizer is recommended when the soil test is below 6 ppm, or 45 pounds soil chloride in the 24-inch sample depth. 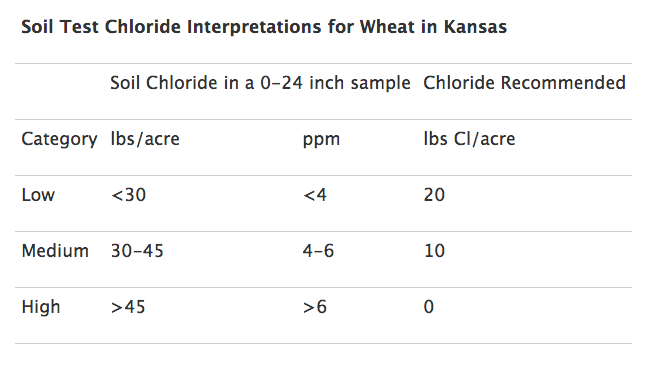 Deficiency symptoms appear as leaf spotting and are referred to as physiological leaf spot.

Kansas State has done considerable research on chloride applications to wheat since the early 1980s, mostly in the eastern half of the state. Results have varied, but there have been economic yield responses in almost all cases where soil test chloride levels have been less than 30 pounds per acre. 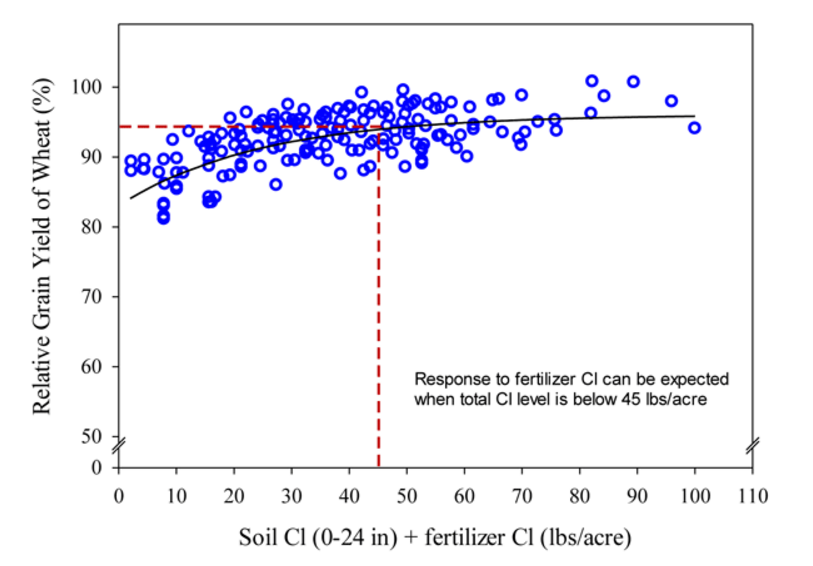 Deficiencies were most likely to be found on fields with no history of potash (KCl) applications. Early studies showed there are variety differences in response to chloride, but no recent studies have been done on this.

Value of Chloride as a Topdressing for Winter Wheat