Conditions of the 2020-2021 winter wheat crop in Kansas are quite variable. Some fields were sown relatively early (mid- to late-September 2020) and capitalized on available soil moisture, resulting in good stand establishment and early development.

For the majority of the state, however, fields planted in October did not emerge until sometime in November or later, due to a lack of precipitation and extremely dry soil conditions.

In south central Kansas, a few scattered rainfall events during the late fall and winter helped with wheat development even in these late-emerged fields. However, conditions since sowing have deteriorated for northern and western portions of the state due to virtually no rainfall, and the wheat crop might be in critical condition for some growers.

These different crop conditions across the state result in contrasting yield potentials, which should be taken into consideration when managing N rate.

For the most part and regardless of crop conditions, now is a good time to start planning for topdressing nitrogen (N). Some key elements that need to be considered when deciding on the exact program you plan to use include: timing, N source, application method and N rate.

Ideally, the N in topdress applications will be moved into the root zone with precipitation well before jointing begins in order to be most efficiently utilized by wheat.

With some of the small wheat out there with limited tillers, having adequate N available to support spring tillering when it breaks dormancy will be important. Also, the potential number of kernels per head is determined right after spring green-up and prior to jointing; thus, having available N in the root zone can help ensure a good yield potential. 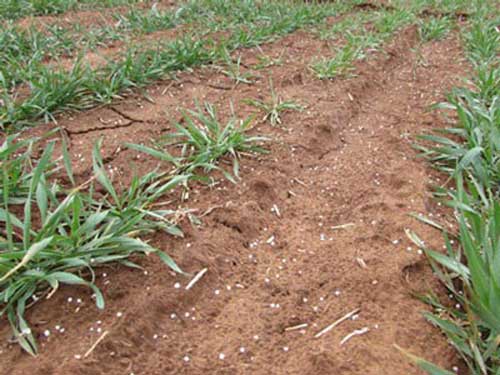 Some combination of fall pre-plant or at-seeding N, and/or early topdressed N, is also normally needed to supply adequate N to support head differentiation. This article will discuss some of the issues to consider when making topdressing decisions.

The most important factor in getting a good return on topdress N is usually timing. It is critical to get the N on early enough to have the maximum potential impact on yield, especially in a year with limited fall tillering. While waiting until spring just prior to jointing can be done with success, this can be too late in some years, especially when little or no N was applied in the fall.

For the well-drained, medium- to fine-textured soils that dominate our wheat acres, the odds of losing much of the N that is topdress-applied in the winter is low.

For these soils, topdressing can begin anytime now, and usually the earlier the better. For wheat grown on sandier soils, earlier is not necessarily better for N applications.

On these soils, there is a greater chance that N applied in the fall or early winter could leach completely out of the root zone if precipitation is unusually heavy. Waiting until closer to spring green-up to make topdress N applications on sandier soils will help manage this risk.

On poorly drained and/or shallow claypan soils, especially in south central or southeast Kansas, N applied in the fall or early winter would have a significant risk of denitrification N loss. Waiting until closer to spring green-up to make topdress N applications on these soils will help minimize the potential for this N loss.

Keep in mind that N should not be applied to the soil surface when the ground is deeply frozen and especially when snow covered. This will help prevent runoff losses with snow melt or heavy precipitation.

Additionally, once the soils start to melt, they will likely be too wet for any field work. Therefore, every field should be considered for characteristics such as slope, N source, tillage system, and the short-term forecast for temperature and precipitation.

On both sandy soils subject to leaching and poorly-drained soils prone to denitrification, split applications may be a strategy to consider. This would involve applying enough N in the fall at or prior to planting to give good support for fall growth and tillering — generally 20-30 pounds of N. Then follow up with an additional application of about 20-30 pounds of N in late winter or early spring to support spring tillering, possibly applied with herbicides.

This late-winter/early-spring application becomes especially important when stands are thin due to poor emergence, as many fields are this year. Finally, come back around jointing or a few days later with a final application to support heading and grain fill.

This strategy can also provide flexibility in a year like this with poor fall growth, allowing to hold back part of the N for later in the spring as we have a better idea of soil moisture and weather conditions for the season.

Most topdressing is broadcast applied. In high-residue situations, this can result in some immobilization of N, especially where liquid UAN is used. If no herbicides are applied with the N, producers can get some benefit from applying the N in a dribble band on 15- to 18-inch centers. This can minimize immobilization and may provide for a more consistent crop response.

The typical sources of N used for topdressing wheat are UAN solution and dry urea. Numerous trials by K-State over the years have shown that both are equally effective.

In no-till situations, there may be some slight advantage to applying dry urea since some of it will fall to the soil surface (Figure 1) and be less affected by immobilization than broadcast liquid UAN, which tends to get hung up on surface residues.

Dribble (surface band) UAN applications would also avoid some of this tie-up on surface crop residues. However, if producers plan to tank-mix with an herbicide, they will have to use liquid UAN and broadcast it.

Controlled-release products such as polyurethane coated urea (ESN) might be considered on very sandy soils prone to leaching, or poorly-drained soils prone to denitrification.

Generally, a 50:50 blend of standard urea and coated urea will provide some N immediately to support tillering and head development, and also continue to release some N in later stages of development. This would work best in settings with high loss potential.

Producers should have started the season with a certain N recommendation in hand, ideally based on a profile N soil test done before the crop is planted and before any N has been applied. If a soil sample was taken at sowing, profile nitrate-N can help determine the rate to be applied based on the yield goal. However, it is not too late to use the profile N soil test if taken in late winter/very early spring before green-up.

While it will not be as accurate as when sampled in the fall, it can still identify fields or areas in fields with high levels of available nitrate N. Unfortunately, it is not reliable in measuring recently applied N. So if a high rate of N has already been applied, a late winter profile sample probably shouldn’t be taken.

Remember that topdressing should complement or supplement the N applied in the fall and the residual soil N present in the soil. The total N application, planting and topdressing, should equal the target recommended rate.

If the wheat was grazed this fall and winter, producers should add an additional 30-40 lbs N/acre for every 100 lbs of beef weight gain removed from the field. If conditions are favorable for heavy fall and/or spring grazing, additional N maybe necessary, especially for a grain crop.

Some fields may also benefit from an application of sulfur and chloride. Like N, these nutrients are mobile in the soil, and a topdress application before jointing is considered an effective application time.

Sulfur and chloride topdress applications should be made based on soil test and history of response. For more information on sulfur fertility, please see the recent eUpdate article, “Sulfur deficiency in wheat,” in Issue 830, December 4, 2020.