Empty stock dams are a visible result of Steve Reimer’s no-till practices. Because his soil now absorbs a much greater percentage of rainfall, Reimer’s former dams contain only a small amount of water and a few volunteer trees.

Reimer implemented no-till in 1996 after testing no-till practices in several fields, with capturing and retaining moisture the biggest goal.

“Dried-up dugouts were a big wakeup call. I didn’t realize we had that much runoff,” he says.

Before no-till, Reimer’s conservation efforts failed to stop serious erosion that carried away topsoil and valuable water after each rainfall event. Even with waterways and terraces, runoff from heavy rains washed across his fields.

Sandy loam dominates Reimer’s soil types and weather conditions can swing from one extreme to the next.

Reimer typically raises corn, soybeans and winter wheat, but if moisture levels are exceptionally low at soybean harvest he drills oats, which can be planted deeper than wheat if the topsoil is dry. 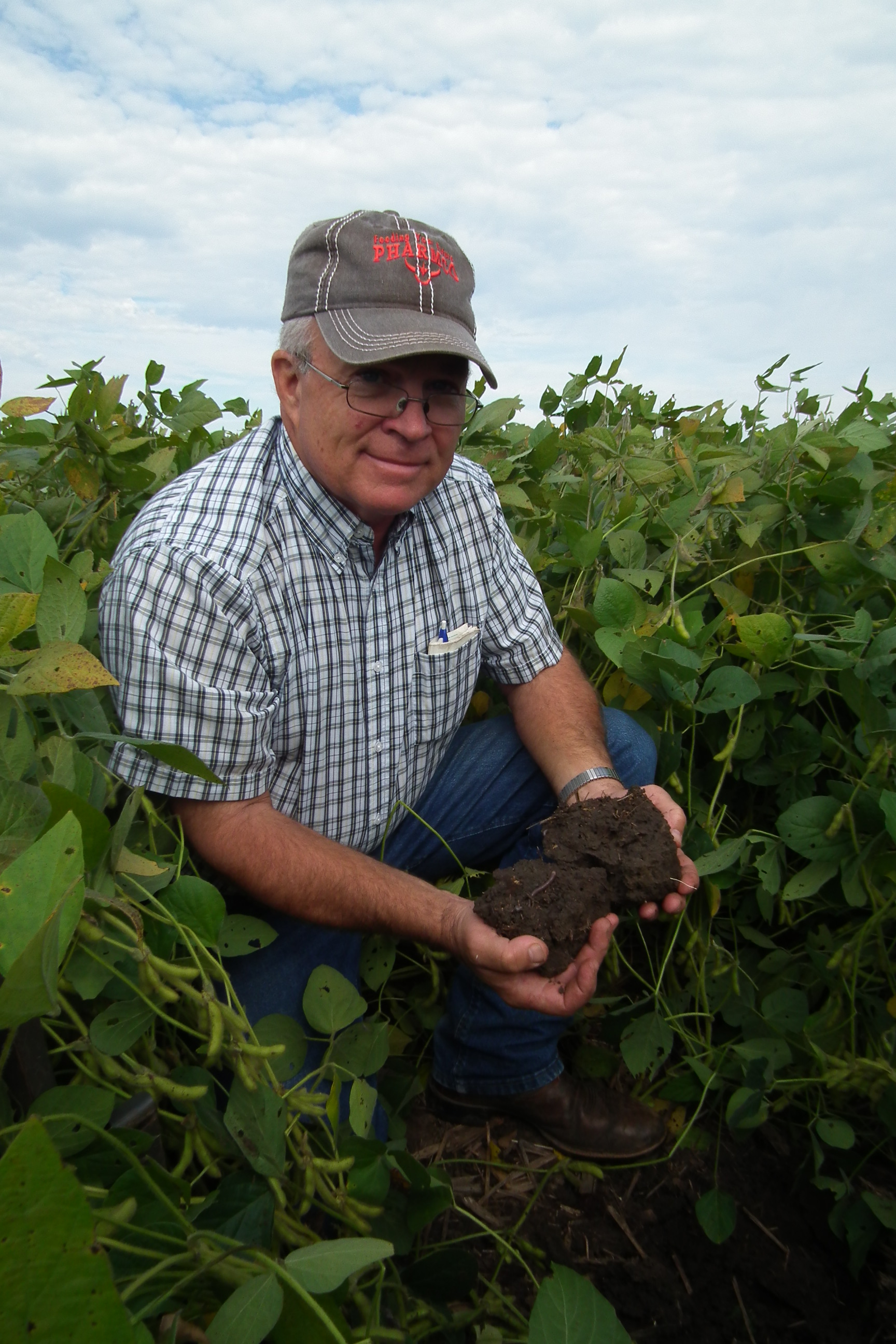 In an average growing season, temperatures have can surpass 100 F for several day, and extended periods of 90 F or more and relatively low humidity are common. Frequent winds may also contribute to drying of crops and soil.

But Reimer notes changes since he adopted no-till that are in line with keeping more water in his soil. “With no-till, we have worms in our soil again,” Reimer says. “That alone dramatically increases our absorption rate.”

Emergence of his first no-till corn crop was slow when compared to neighboring fields, but the payoff came at harvest that year when he combined his no-tilled fields while other rain-starved cornfields were cut for silage.

“Typically, emergence isn’t a problem,” Reimer says. “Our corn is a 95- to 105-day variety. Even if it’s dry at planting, which it was last spring, we usually have the necessary spring rains to germinate the crop.”

Reimer attributes some of his emergence success to use of John Deere’s 1770 no-till vacuum planter. He plants both corn and soybeans on 30-inch rows with the machine, which includes factory closing wheels and Yetter trash whippers with pneumatic downforce control he manages from the tractor cab. If he experiences seed-to-soil issues with soybeans, he uses a roller to resolve it.

Corn plant populations vary between 22,000 and 24,000 seeds per acre, and soybeans are planted at 145,000 seeds an acre. Between the vacuum planter’s seed-placement accuracy and trash whippers helping improve seed-to-soil contact, Reimer says he gets satisfactory emergence.

Reimer prefers to plant corn into wheat stubble, but he planted corn into soybean stubble this year, after a dry fall in 2014 caused one field of winter wheat to fail.

“We planted those failed acres to corn this spring, which looks really good after we started receiving some spring moisture,” he says.

In an average year, Reimer leaves 6-8 inches of wheat stubble for ground cover and organic matter. Heavy winds that took down some of his 2014 wheat crop forced him to remove more straw than he wanted to in order to harvest the crop.

To remedy that, he used a heavy harrow to help spread straw stubble evenly over the field after harvest.

“The harrow created a nice mulch so we still had residue on the ground,” Reimer says.

Reimer began using cover crops several years ago, and still uses them in several ways. He may plant them into wheat stubble to help break down residue, or to incorporate nutrients into the soil. He also grazes cover crops with his Simmental and SimAngus cattle. 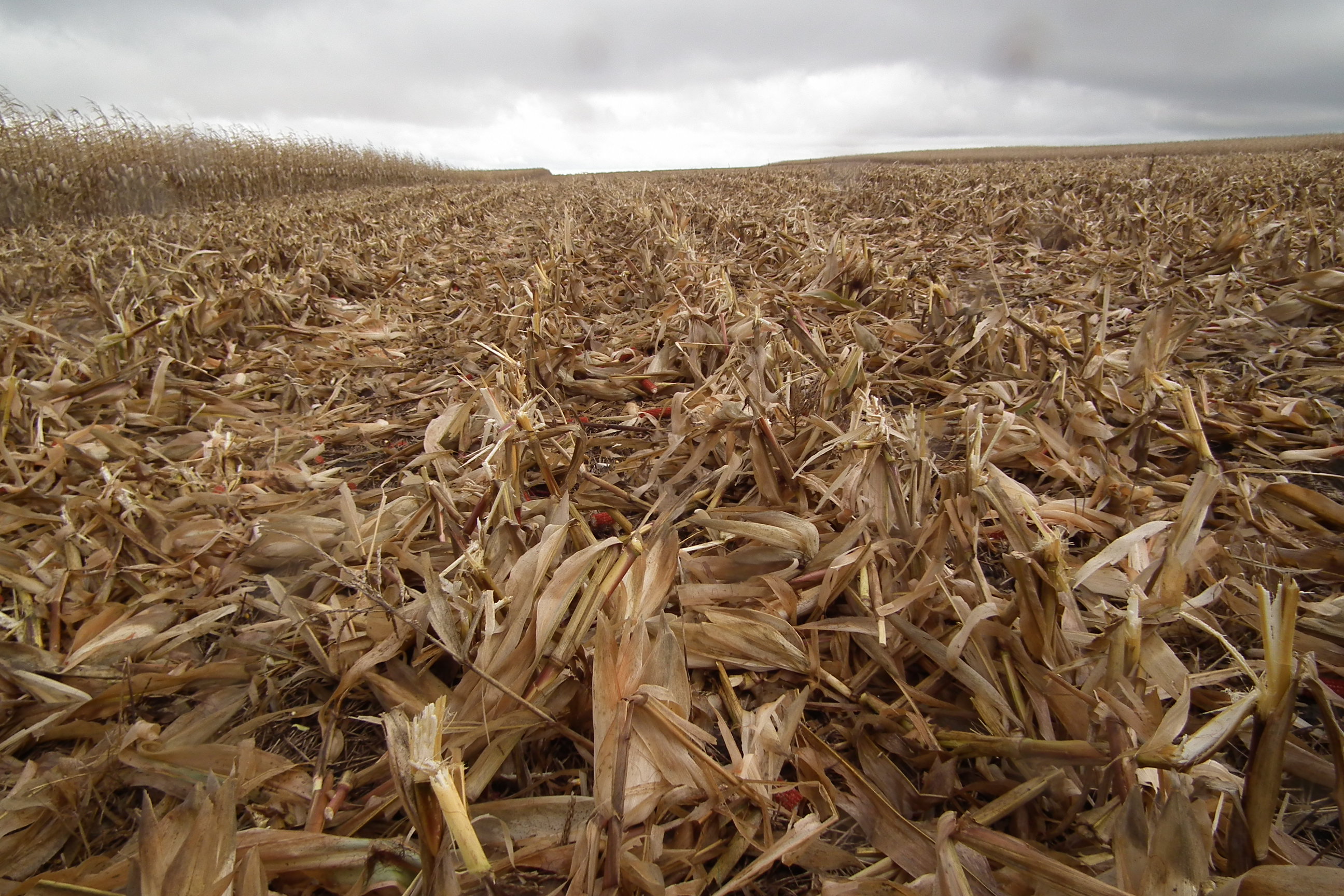 The seeding rate with his John Deere 1590 drill varies depending on the exact composition of the mix, typically ranging from 10 pounds to 15 pounds per acre.

“We don’t always graze our cover crops,” Reimer says. “Grazing decisions are based on fall conditions. Most of our cover crops include 100% annuals. If the cover crop is planted in late, fall we probably spray it in spring if it doesn’t winterkill.”

To plan his cover crop mix, Reimer works with his local NRCS office to look at the field’s crop history to determine what nutrients have been removed and may need to be replaced.

Soil analysis data from the field provides a historic perspective of nutrient profiles and trends. Determining whether or not the cover crop will be grazed helps Reimer select forage that appeals to the cattle.

“Obviously cattle need forage with nutritive value,” Reimer says. “You also want it to be appetizing so they’ll go after it more aggressively.”

“We don’t cross-fence the field to create paddocks, but we do rotate the cattle in and out of the field,” Reimer says. “Compaction has never been an issue for us. I suspect that’s partly due to the fact that turnips and radishes are usually in our cover-crop mix and work well to break up hardpans.”

Reimer says the stalks from Bt-resistant corn seem to break down more slowly than some other corn varieties, and he’s learning about the potential benefits of sowing cover crops into standing corn.

“For me the biggest goal of seeding cover crops into corn would be to realize more benefit from grazing the stalks,” Reimer says. “If cover crops would help break down corn residue they could also give cows more to graze.” 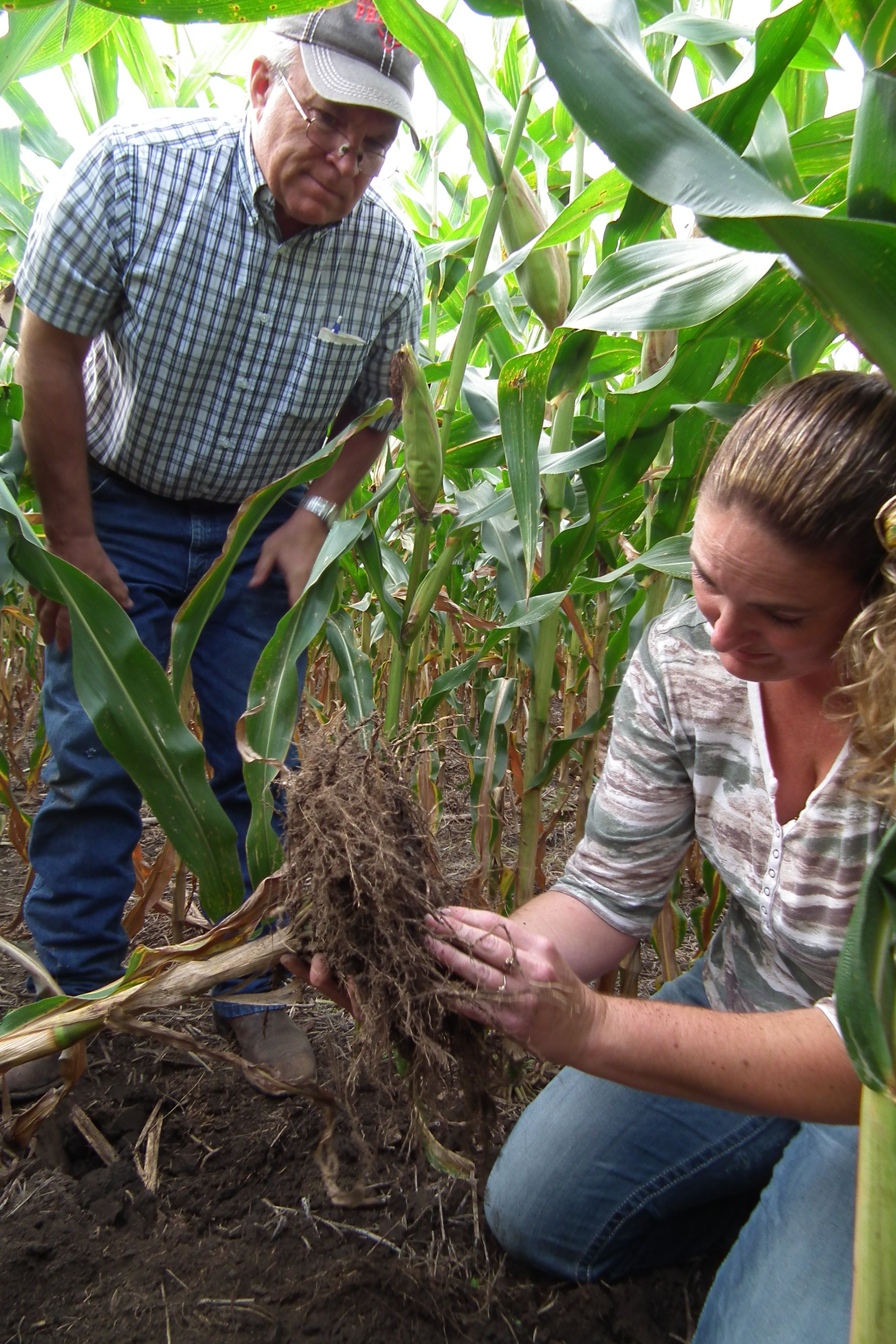 Stacy Turgeon (right), a district conservationist for the NRCS office in Chamberlain, S.D., is one of the resources Reimer relies on for guidance in developing crop and soil-management strategies. Examining corn roots for signs of soil compaction is one of Reimer’s regular monitoring activities. (NRCS photo)

He samples each field every 3-4 years. Typically, he applies 70-75 pounds of 11-5-2 high-phosphorus liquid starter fertilizer at planting. Nitrogen and other fertilizer needs identified by zone sampling — such as more phosphorus, zinc or micronutrient product — is applied in early winter.

He doesn’t have 1996 baseline soil data to confirm the soil-quality advantages that no-till provides, but he says yields have steadily increased over the years, and improved soil moisture retention has seen him through in drought conditions, improving overall profits.

“Genetics of the cereal grains we’re planting have been significantly enhanced over the last 20 years,” Reimer says. “We know we have more reserve moisture, which helps us make the most of the hybrids we plant.

“Since rain totals and overall weather patterns vary greatly from year to year, it’s difficult to pinpoint how much each variable has contributed to yield increases.”

While Reimer hasn’t tracked any input trends since 1996, he believes his input costs have declined. Soil samples confirm increased availability of nitrogen and increased soil organic matter levels, which average nearly 4% across the farm.

A family-owned and operated business, Reimer’s R & R Cattle Co., is located in central South Dakota along the Missouri River.

“They work hand-in-hand,” Reimer says. “The cows bring fertility to the soil and get nutritive value out of grazing crop residue. They help break down organic matter and reduce the need to haul manure back to the field. It all works together very well.”