By John Dobberstein posted on September 6, 2015 | Posted in Water Management

GARDEN CITY, Kan. – In a region where some of the U.S.’ most productive farmland lies, Kansas State University researchers are putting a water-saving technology on the fast track.

Agricultural engineer Isaya Kisekka said he and other faculty in the university’s Southwest Research and Extension Center are finding ways to retrofit center pivot sprinklers with mobile drip irrigation tubes.

“Mobile drip irrigation has the potential to be applied on most of the row crops we grow in this region,” Kisekka said. “One of the advantages of the mobile drip system is that it is retrofitted into an existing system, so the initial cost is not prohibitive. The cost is relatively small compared to the cost of a primary center pivot system. Many producers already have a (center pivot) system.”

Small, polyurethane tubing with emitters – or small holes – spaced about 6 inches apart carry water from a traditional center pivot sprinkler along the ground. Water is spread gently at the ground level, as opposed to being sprayed above the crop or within the crop canopy.

It’s similar to another successful innovation by Kansas State University researchers in Colby called sub-surface drip irrigation, or SDI. Mobile drip lines, however, snake along the ground as the center pivot moves, whereas SDI lines are underground. 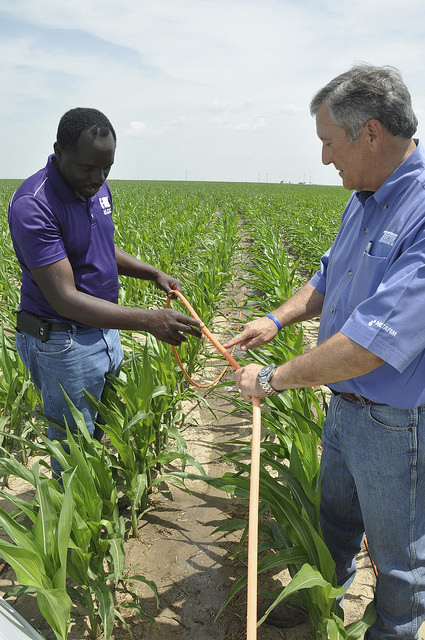 Among farmers in the southwest region, “there’s a lot of interest in it,” said Mark Rude, executive director of the Southwest Kansas Groundwater Management District No. 3. “It’s viewed so favorably because it can retrofit onto existing pivot systems, and it has that efficiency element of drip tape without the commitment of putting it into the ground.”

Farmers in western Kansas have long been cognizant of the water they’re putting in their fields, largely because they are drawing from the once-abundant source known as the Ogallala Aquifer.

One of the world’s largest aquifers, the Ogallala underlies an area of approximately 174,000 square miles in portions of eight states. About 27% of the irrigated land in the U.S. underlies the Ogallala Aquifer.

It’s also crucial to Kansas agriculture. In 2014, Kansas State University reported findings indicating that eight counties in western Kansas — all underlying the Ogallala Aquifer — together sold more than $6.3 billion in crops and livestock, or more than one-third of total agricultural revenue for the entire state.

Farmers want to know that mobile drip irrigation will work for them.

“With any new technology, there is apprehension to change. There is an eye of innovation and an eye of skepticism,” Rude said. “Will it really work, or is it just a marketing scheme? All of that needs to be worked through in the normal way, a combination of demonstrations by folks like Kansas State University and fellow agri-businessmen trying it out.”

Monty Teeter, who owns a successful irrigation business in Ulysses, Kansas, said he thinks irrigators will move quickly once more information about the technology is available.

A Kansas State University researcher wants to make sure that a new technology that benefits irrigated farm crops isn’t also going to open a door to unwelcome field pests.

Sarah Zukoff, an entomologist with the university’s Southwest Research and Extension Center, is on a team that is studying the use of mobile drip irrigation in southwest Kansas corn fields.

Mobile drip irrigation is a system in which polyurethane tubes, similar to a garden hose, are attached to center pivot sprinklers to deliver water near the surface of the crop. Researchers are finding that it has the potential to save water, because it cuts down on evaporation losses.

“This new drip technology is pretty interesting, because it takes the water off the plant and puts it at the base of the plant, which I think would affect the insect population, especially those that are affected by moisture, like spider mites,” Zukoff said.

Spider mites can be a corn producer’s archenemy. The pest is known to infect southwest Kansas corn fields due to hot, dry conditions in mid- to late-summer.

As mobile drip irrigation becomes more common in the region, Zukoff said she will continue studying the “micro-environment” around the leaves of crops. Watering closer to the ground, she said, will affect the movement of insects, some for the good and some not so good.

The research will help to develop new ways of controlling field pests so farmers can continue growing the crops safely, she said.

“Most people want to utilize any potential water savings from mobile drip to grow more crops and not have any (net) water savings,” Teeter said. “That’s going to be the push and shove in our industry here in the future: maintaining a yield for a longer time, or using (the aquifer) up and being completely done (sooner).”

Kisekka said mobile drip irrigation is not a new technology; it was first tried in the 1980s in California, and additional studies have taken place across the country. Concerns about the decline of the Ogallala Aquifer and reduced capacity of landowner’s wells have spurred a need for information from university researchers.

“Our study will fill the gaps of a lack of data,” said Kisekka, noting that researchers will get their first full year of data following this year’s corn harvest.

Kansas State University also is involved in a cost-benefit analysis through its agricultural economics department and a study of the system’s impact on insects through its entomology department.

Rude said that the Governor’s Economic Advisory Board recently reported to the U.S. Department of Agriculture that Kansas loses about $3,900 for every acre of farmland converted from irrigated to dryland (non-irrigated) farming.

“As new technologies are implemented, it’s a new opportunity to emphasize to the Kansas community and nationally the role of efficient irrigation as an assurance to individual livelihoods, regional economies and national food security interests,” Rude said. “We can continue to do this intensified agriculture that necessitates irrigation, and we can do it in a responsible way.”

Kisekka acknowledged the technology still has many challenges, such as changing to circular planting to ensure the drip line stays on the ground. Researchers also want to know the impact of rodents biting moving parts, the impact of the tube dragging on the ground and just how much money can be saved over time.

“This technology is not perfect currently. We are learning as we work with it,” he said. “I’m sure there will be a learning process, but given the potential benefits of the technology, it can be another tool that producers can use to increase their water productivity.”