Top 10 Things to Scout After Swathing 2 Rounds of Canola

Tangled mature canola fields can be hard to scout. Swathing two full rounds before scouting makes it much easier to quickly check a number of plants in a few areas — including the back of the field.

Here are things to look for:

1. Seed colour change. The ideal time to swath canola is when most of the field has 60% seed colour change on the main stem. Opening up the first two rounds makes it easier to see the whole field.

2. Crop uniformity. The road side of the field may look good, but what about hill tops, low spots and the back half of the field? An assessment of crop uniformity can be used to determine swath timing. While scouting, note what may have caused uniformity issues and how they could be fixed next year.

3. Plant population. Count the plants per square foot in a few areas. Is the number on target? A low plant population can be a major factor in an uneven crop, especially because low counts mean bigger plants with lots of side branches. This extends maturity and makes the swath decision much more difficult. 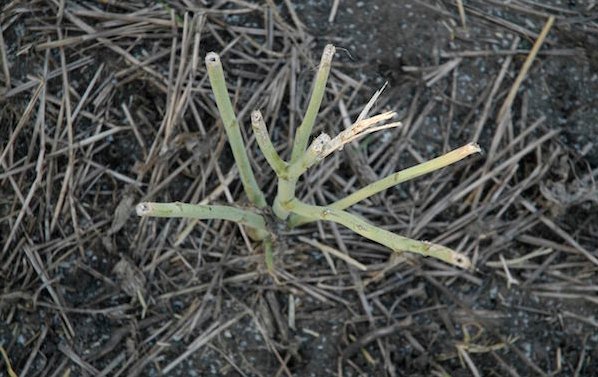 With a low plant population, canola will grow bigger with more branches.

4. Blackleg. Clip a few stems to check disease incidence and severity. Blackleg tends to be more severe in fields with short canola rotations and where the same varieties have been grown repeatedly. Blackleg can also be worse in fields that received hail damage prior to or at bolting. Swathing is a relatively easy time to identify blackleg severity. More on blackleg ID and field rating.

5. Clubroot. Early plant death is a symptom of most diseases. Gently dig up plants to check the roots for galls. Healthy looking plants can also have clubroot galls.

6. Sclerotinia stem rot. Sclerotinia levels were generally low this year, although higher yielding areas that had good moisture are seeing higher levels. Other diseases and environmental stresses may be confused with sclerotinia.

To identify sclerotinia stem rot, look for bleached lesions with zonate markings, straw-coloured plants, and/or hollow diseased stems with sclerotia bodies present. Other diseases such as root/foot rot, verticillium wilt and blackleg may be confused with sclerotinia, but none of them will produce sclerotia.

7. Alternaria black spot. This wouldn’t normally make a top 10 list of things to scout, but the disease seems to be more common this year. Look for black spots on pods and blackened pod tips as signs of more serious infection. More on alternaria. 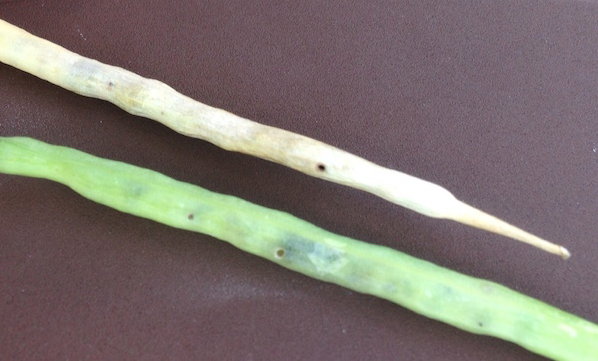 Exit holes from the cabbage seedpod weevil larvae are shown.

9. Swede midge damage. Swede midge continued to spread across northern Saskatchewan this year, with fairly large populations found around Meadow Lake. Low numbers were also detected in Alberta, just over the border in the Lloydminster area. What to look for.

10. Flea beetles. August is when the next generation of adults emerges, but with all the plant mass, they rarely cause economic levels of damage. Full grown plants are simply not as vulnerable as seedlings, even though the overall flea beetle population is around the same as it would be in the spring.