Last week, symptoms of sudden death syndrome (SDS) began to appear in April 15-planted soybeans at the University of Illinois’ Northwestern Research Center in Warren County. Weather during the 2015 growing season has been favorable for the development of SDS — cool, moist soils after planting and frequent rains ever since. Symptoms began appearing approximately 3 weeks earlier than in 2014.

Foliar symptoms begin with a yellowing of the tissue between leaf veins. This tissue then dies, becoming brown in color with only the leaf veins remaining green. Leaves eventually fall off, while petioles remain attached to the main stem. The earlier that symptoms develop and leaf drop occurs, the greater the potential for yield loss. 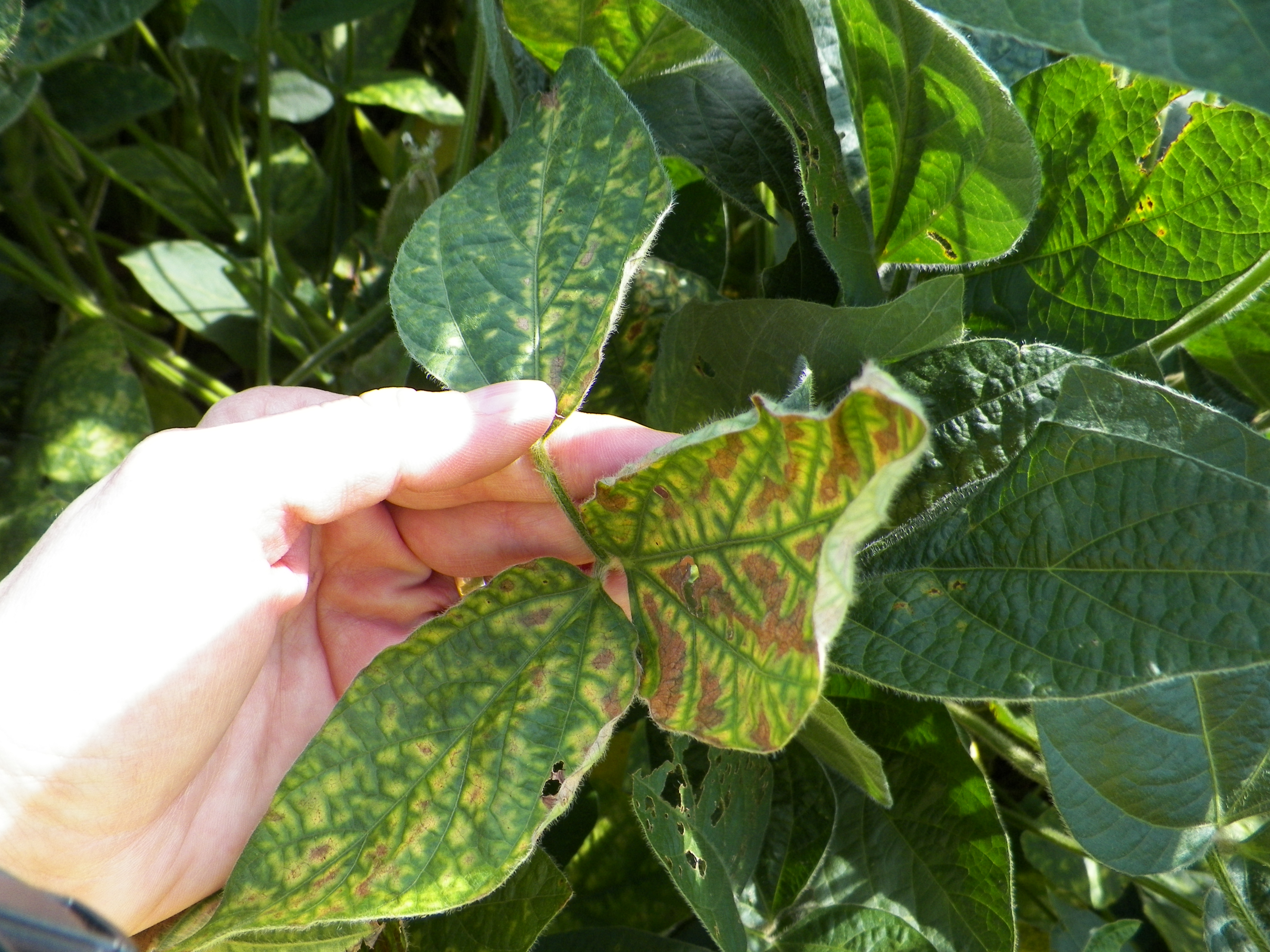 While foliar symptoms of SDS can be easily confused with those of another disease — brown stem rot — one need only split the plant length-wise to distinguish the two. Brown stem rot causes browning of the inner-most stem tissue (pith) while stems of plants with SDS remain healthy. Blueish-white spores of Fusarium virguliforme can sometimes (not always) be seen on the roots of symptomatic plants. 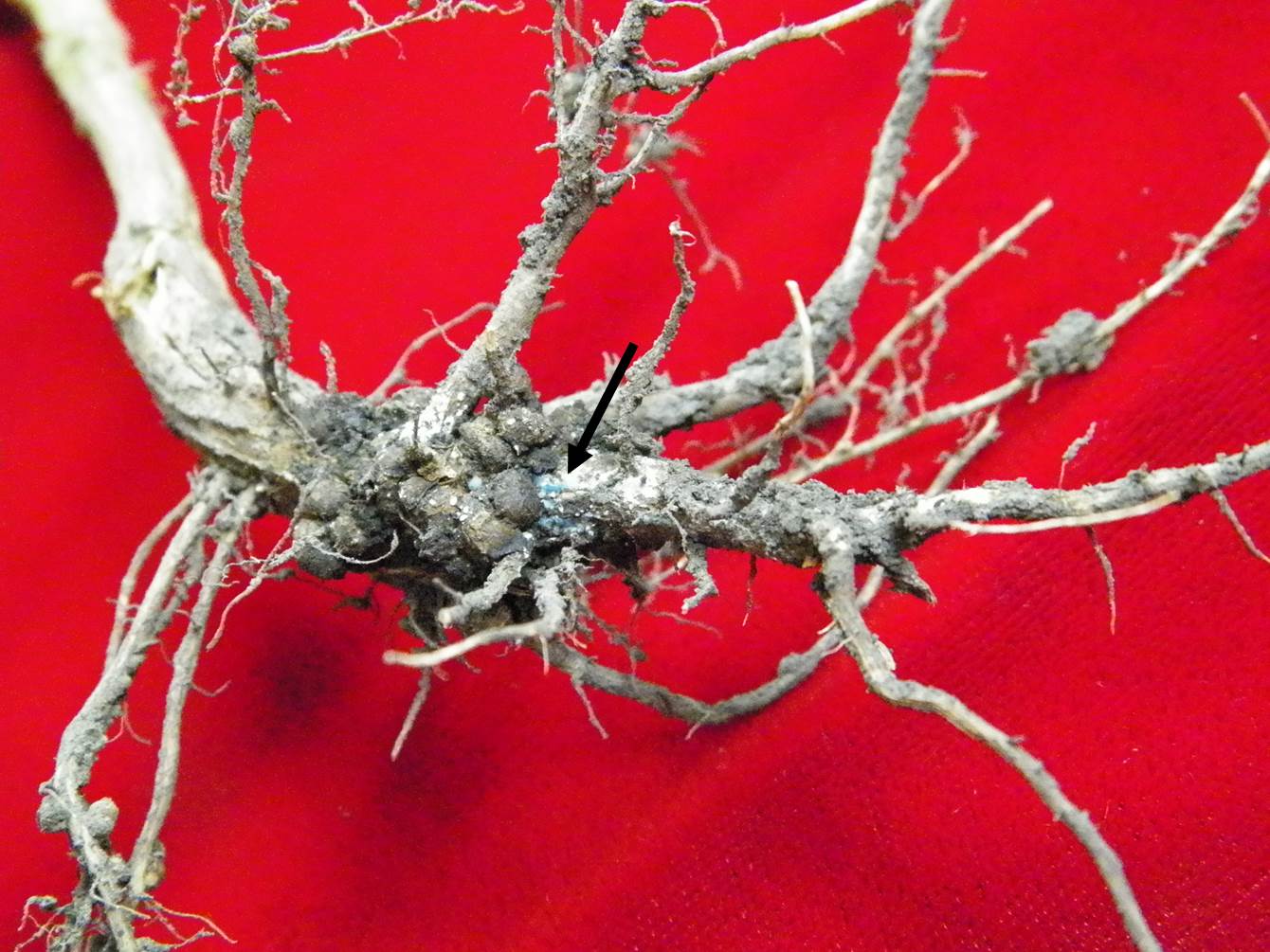 Although the most conspicuous symptoms of SDS occur in leaves, the fungus itself remains in the roots and in the stem nearest the soil line. Foliar symptoms are caused by toxins produced by the pathogen. These toxins are carried along with water to leaves through the xylem tissue.

The SDS disease cycle has important implications as far as management is concerned: infection and colonization have long since taken place and there are no mid-season management tools with which to manage this disease. Management decisions must be made before the growing season begins.

To provide impartial SDS resistance ratings to help soybean producers more easily compare varietal resistance among seed brands, teams led by Jason Bond of Southern Illinois University and Silvia Cianzio of Iowa State University evaluated more than 500 soybean varieties (maturity groups 0 to V) from 19 different seed companies. Results from these 2014 check-off sponsored trials are posted here. Results from the 2015 trials are to be compiled and released in October in time for producers to use while making their 2016 seed purchases.

Research has also shown that SDS may be more severe in fields that also have high populations of the soybean cyst nematode (SCN). Monitoring SCN populations and planting SCN-resistant soybean varieties can also be important components to managing SDS.

The newest tools available for managing this disease are fungicidal seed treatments labeled specifically for SDS. While he was a University of Illinois Extension plant pathologist, Carl Bradley (now at the University of Kentucky) and his team conducted several SDS seed treatment trials. In these trials, the active ingredient in ILeVO (fluopyram) showed efficacy against SDS. Other SDS seed treatments are also currently being evaluated.

As the season progresses and we near harvest, check out the Northwestern Illinois Research Center’s website and blog for data from our 2015 SDS seed treatment trial and other research trials at this location.