Scouting for Soybean Aphids, Determining When Treatment is Necessary

Soybean aphids have recently been found in field surveys in northeast Nebraska from Battle Creek to Ponca. Numbers are extremely low, as is typical this time of year, but this does signal it is time to start scouting.

All aphids were found on the newest leaves, so we imagine colonization was fairly recent. The good news is that we also observed soybean aphid natural enemies in these fields, so they may hold the populations in check, or at least slow their population growth.

The soybean aphid is soft bodied, light green to pale yellow, less than 1/16-inch long, and has two black-tipped cornicles (cornicles look like tailpipes) on the rear of the abdomen (Figure 1). 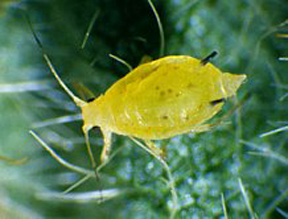 Soybean aphids have been reported in most soybean producing regions of Nebraska, although the highest and most economically damaging populations typically occur in northeastern Nebraska.

In much of the soybean aphid's range northeast and east of Nebraska, significant aphid infestation has often occurred during vegetative stages of soybean. These infestations then undergo rapid population growth to reach high populations during the flowering stages (R1, R2).

During most years in Nebraska, however, very few aphids have been found during the vegetative stages. This may be in part because in Nebraska we have less of the soybean aphid's overwintering host, common buckthorn, than in states further east and north. 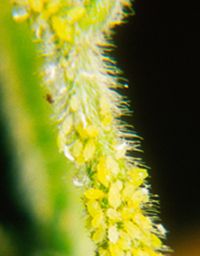 Figure 2. Soybean aphid populations can quickly build into the thousands under the right conditions.

Of course, there are always exceptions to any rule, so one should always be watchful for soybean aphid colonization and population increase.

A charcoal-colored residue also may be present on the plants. This is sooty mold that grows on the honeydew that aphids excrete. Honeydew by itself makes leaves appear shiny. Soybean plants appear to be most vulnerable to aphid injury during the early reproductive stages. Heavy aphid infestations during these stages can cause reduced pod and seed counts.

There are two methods to scout and determine if an insecticide treatment is warranted; a conventional scouting method using the 250 aphid/plant economic threshold and a speed scouting method.

The current recommended economic threshold for late vegetative through R5 stage soybeans is 250 aphids per plant with 80% of the plants infested and populations increasing. Depending on economic conditions, this generally gives you about 5-7 days to schedule treatment before populations reach economically damaging levels.

If populations do not increase during these 5-7 days, you may be able to eliminate or delay treatment. Determining if the aphid population is actively increasing requires several visits to the field. Factors favorable for aphid increase are relatively cool temperatures, plant stress (particularly drought), and lack of natural enemies.

Soybean aphids in Nebraska usually reach the economic threshold and require treatment in late July through August, with a few fields requiring treatment earlier in July. Treatment during this period usually is enough to keep aphid populations from resurging because there is not enough time for populations to build-up before they would naturally leave the fields in late August and early September. The earlier a field is treated, the greater the chance that any surviving aphids can later reproduce or new aphids can repopulate the field.

Remember, insecticide treatment also kills many natural enemies, so any aphids that do re-infest a field are not constrained by predators and other natural controls. Even insecticides with a relatively long residual cannot last when insecticide treatment is done in early or mid-July, particularly during a year when aphid populations are thriving. If one has to treat early, make sure to closely monitor the field until early September.

Another practice that can result in aphid population resurgence is unwarranted insecticide treatment, either because fields were treated well before the threshold was met or fields were treated along with an herbicide (in some cases a fungicide), regardless of aphid presence. These treatments kill natural enemies and are usually done relatively early so there is plenty of time for aphids to resurge, or re-colonize a field. Aphid populations below or even at the economic threshold do not cause yield loss, so treating before populations reach 250 aphids/plant only increases the probability of aphid resurgence.

In addition, we have observed that many fields support a non-increasing, low population of aphids (e.g., less than 100 aphids/plant) through August. Treating these fields would be a waste of time and money.

Tank-mixing insecticides with glyphosate or other herbicides can be problematic because application methods for herbicides (e.g., lower pressures, large droplet producing nozzles) are not optimal for good insecticide efficacy. Tank-mixing with fungicides can be effective because application methods for fungicides and insecticides require high water pressure for adequate penetration and coverage, however, only conduct this practice if soybean aphid thresholds are met.

Additional sources of information can be accessed through the UNL Entomology Website and CropWatch.

What to Consider When Treating for Soybean Aphids Multiple Times