In North Dakota, several field reports of low numbers of wheat stem sawfly adults flying in wheat have been received from NC (Ward-Mountrail Counties between Max and Parshall), NW (McKenzie County) and SW (Sioux County) areas of the state.

Insecticide seed treatments (Cruiser 5FS, thiamethoxam, neonicotinoid insecticide) applied at a low or high rate also were not effective in reducing the percent of damaged stems.

Furthermore, the treatment (low rate of seed treatment plus a foliar-applied at the 4-6 leaf stage) was not effective either. In fact, application of an insecticide negatively impacted the parasitoids that attack wheat stem sawfly and resulted in higher numbers of wheat stem sawflies the following year.

Reasons why insecticides are not effective against wheat stem sawfly include:

The best strategies to manage wheat stem sawfly continue to be early swathing if 15% of the stems are infested (swath as soon as kernel moisture drops below 40% to prevent infested stems from lodging), biological control with parasitoids (averaged 35% parasitism rate in western ND during 2000-2003 survey) and the use of solid-stemmed wheat varieties(host plant resistance), such as Mott HRSW. 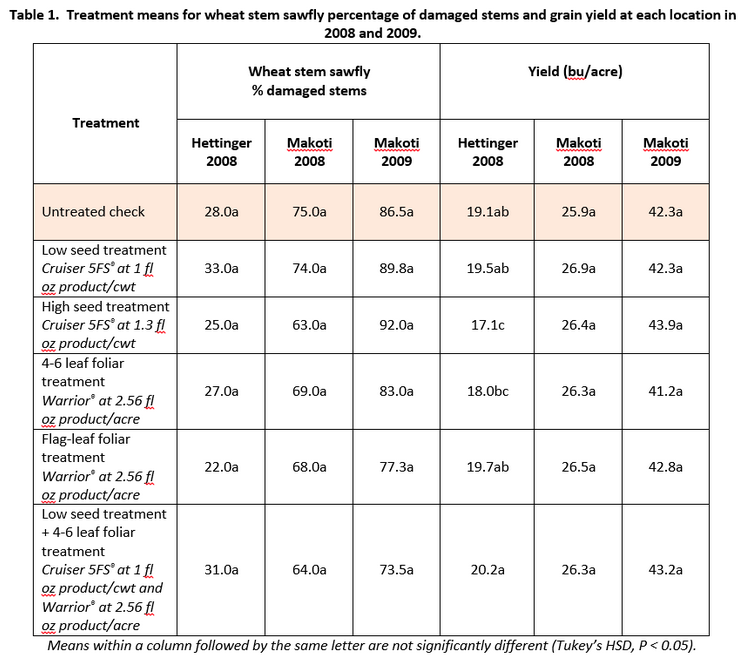 Within the past couple weeks, researchers have seen peak emergence of wheat stem sawfly adults throughout much of the wheat production areas of Nebraska.

The Panhandle Research and Extension Center (PREC) Entomology Lab has conducted a survey of wheat stem sawfly infestation in Nebraska since 2011 (Table 1). Our results indicate an infestation that continues to grow in both intensity and geographic range.

Understanding how this population moves through the landscape over time is an important component in helping biologists understand how any invasion establishes and then to develop appropriate management strategies. To date, stem sawfly populations have been very sparse in southwestern Nebraska and eastward.

In 2015 the Panhandle REC will be joining forces with the West Central Research and Extension Center (WCREC) Agroecosystems Entomology Lab in North Platte to ensure better survey coverage throughout all of the major wheat producing areas of Nebraska.

A few wheat producers contacted UNL entomologists this spring to inquire about how this cool wet spring was going to impact sawfly populations. The short answer was "we don't know." However, because of survey efforts this year, we will be able to compare this year with previous years to determine that impact, if any. Based on work by a graduate student developing an adult stem sawfly sampling plan, our current sawfly populations were not affected by this year's cool and wet conditions. A recent sample revealed as many as 300 stem sawfly adults in 20 sweeps.

Along with these surveys, we have also collected samples of other grass species that were adjacent to wheat fields to evaluate them for the presence of stem sawfly larvae (Table 2).

We could find stem sawfly larvae present in downy brome, intermediate wheatgrass, Japanese brome, smooth brome, and rye. Since the wheat stem sawfly is a native to North America, it isn't too surprising to find it infesting other hollow-stemmed grasses. Obviously, grasses such as downy brome are problematic in their own right in our wheat production systems.

Of course, we aren't idly watching this insect spread across the landscape, but are researching solutions. In collaboration with the UNL Wheat Breeding Program, we continue to evaluate wheat varieties for resistance to wheat stem sawfly (Table 3).

In last year's State Variety Trials, we saw some solid-stemmed wheats (e.g., Warhorse) produce decent yield along with a high level of sawfly resistance (based on larval infestation counts). We are also recording higher levels of one stem sawfly parasitoid, Bracon cephi, with as many as 400 collected last year at one field near Hemingford.

Unfortunately, based on the stem sawfly emergence this year, parasitoid populations have yet to catch up with stem sawfly populations or are not yet seasonally adapted to this area.

As we learn more about these parasitoids and what management options may best improve their habitat, we will be sure to keep you informed. The WCREC Agroecosystems Entomology Lab has been studying how conservation practices, such as cover crops and wildflower strips, can impact beneficial insects, such as parasitoids and predators.

These practices could play an important role in suppression of pests like the wheat stem sawfly.

Projected Profits of North Dakota Crops Vary by Region in 2019