By Frank Lessiter posted on May 13, 2015 | Posted in Seeding & Planting, Equipment

Even narrower rows and twin rows may be important to get average corn yields over the 300-bushel-per-acre mark.

An Iowa seed company believes enough in the benefits of growing twin-row corn with new hybrids that are better suited to extremely high plant populations that it’s offering a unique cost-saving equipment incentive this year to growers.

Planting corn in twin 20-inch rows with seeding rates as high as 60,000 seeds per acre may well be a way to help growers harvest higher corn yields. Besides higher plant populations, the higher yield potential could be due to an earlier crop canopy that helps control weeds, reduce erosion and lower soil temperatures.

Myron Stine, vice president of sales and marketing at Stine Seed Co. in Adel, Iowa, says the company offered a trio of 20-inch twin-row equipment choices this year. As a result, around 60 growers were able to lease and later consider buying a Great Plains 48-row planter, John Deere 72-row or 48-row rig for only a third of the retail price. These growers will also need to invest in a 20-inch-row corn head to harvest the twin-row crop.

Some growers see a shift to 20-inch twin rows as a game changer for boosting corn yields because it allows growers to space corn rows 8 inches apart with a 12-inch gap between the next set of twin rows.

Newly introduced Stine hybrids suited for higher plant populations have resulted from several decades of breeding for genetics that are more suited for use with 20-inch twin rows. These hybrids tend to be shorter than many of today’s more popular hybrids and have a more upright leaf architecture that allows the corn plants to capture more sunlight. 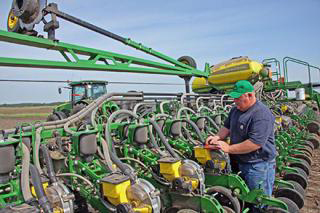 David Thompson, the national marketing and sales director for Stine, says the company is making a push for narrow-row planting to help drive growers toward higher plant populations.

“With 30-inch rows, there’s a realistic limit to how high a plant population you can have,” he says. “If you’re going to promote higher populations, you’re going to have to convince farmers to move to narrower rows. That’s really what drove us to start down this path of narrow-row planting and eventually to this twin-row planter incentive program.”

Stine agronomists have seen the yield benefit of having corn plants spaced 12 inches apart — both between the rows and within the rows. Thompson says the company started working 4 years ago with 12-inch rows and found equidistant corn spacing leads to improved plant access to water, nutrients and sunlight.

“For example, at about 50,000 plants per acre with 12-inch rows, every plant has about 12 inches of space on all sides,” says Thompson. “That’s very advantageous to corn plants.

“However, the downside of 12-inch rows in the past was the equipment had to be custom built, and in a lot of ways it was not easily accessible to growers.”

After several years of research, the Stine staff started kicking around the idea of how to make this technology accessible to the average grower. The solution was the 20-inch twin-row concept, which allows for harvesting the double rows with a standard 20-inch corn head.

To make the system more accessible to growers, it became apparent to the Stine staff that they would have to put their money where their mouth is on the equipment side. Even with narrower rows, better plant spacing and new genetics allowing for higher plant populations, equipment could be a limiting factor. 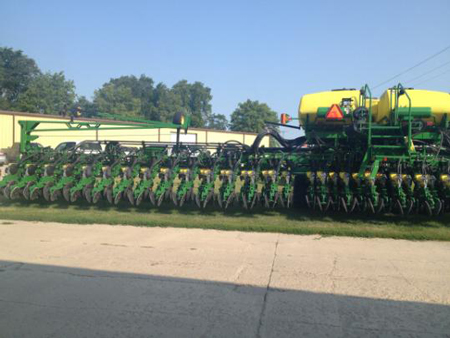 The equipment incentive program offered substantial savings to growers with narrower row experience who wanted to try planting in twin rows 8 inches apart in an effort to boost corn yields.

However, the Stine agronomists are quick to point out that adding more plants requires better management strategies and larger amounts of nitrogen. Due to more residue with thicker corn stands grown under no-till conditions, vertical tillage may also play a key role.

Tests conducted over the past several years by growers in the Stine Seeds twin-row program resulted in higher yields in many instances, although dry 2014 weather held back yields in some areas. Some of these growers used a 20-inch twin-row plant population of 55,000 corn seeds per acre compared with normal 34,000- to 36,000-per-acre seeding rates with 30-inch rows.

Corn seeded in 30-inch rows at a rate of 60,000 plants per acre leaves only 3 1/2 inches of room between the plants, which means the roots and plants compete with each other for nutrients and water. With corn planted in 20-inch twin rows at 60,000 kernels per acre, there’s an average of 8.7 inches between the plants.

While there are some Stine seed purchase requirements with the favorable equipment incentive, growers can walk away from the planter incentive program if they decided that twin rows aren’t in their future.

With corn seeded at a rate of 60,000 kernels per acre, there is an average of 8.7 inches between the growing plants in the twin- row system.

The goal was to make the concept attractive for early adopters who are willing to try this new system. It was designed as a 1-year program and is not something the company plans to do long term.”

Thompson says this year’s program involved 85-90 twin-row Great Plains and John Deere planters. While the planters came off the manufacturing line as experimental models, most now have standard part numbers that have been assigned by the manufacturers.

About two-thirds of the planters went out to growers under the Stine lease and purchase program. The remaining planters were used by the Stine agronomy team for research plot work and custom planting. In 2014, the staff planted twin-row corn on nearly 11,000 acres for about 100 growers to gather research data and spread the word about the program.

Since the planters were pretty much standard models, some potential twin-row prospects likely found the units were not adapted for use under their particular no-till conditions.

With the DB 60 72-row John Deere planter, the list price was $439,707, and the total 2-year payment would be $104,468 to take ownership. While local dealers set up and service the planters, the Deere planters were only available for 2015 through the Stine equipment incentive program.

Thompson says the company feels good about the results for the equipment incentive program. Among growers who participated in the program in 2014, some purchased a planter after they saw what it could do.

“Once you have nearly 100 of these planters out, that’s a pretty good testament,” says Thompson. “Come fall, we’ll have a good opportunity for growers to evaluate this system and see what it has to offer.

“Obviously, it depends on what John Deere and Great Plains want to do, but they have the capacity and ability to build that planter for a grower who wants to do that. Our goal all along was to move the conversation forward and get to a point where it’s out of the research phase and into the mainstream.”