Areas of North Dakota with a white crust on the soil are expanding this spring due to an accumulation of salts in the soil.

"Soil salinity is caused by excess soil moisture that dissolves subsoil salts and brings those salts to the soil surface," explains Chris Augustin, area Extension soil health specialist at North Dakota State University's North Central Research Extension Center near Minot. "The water evaporates and the salts are left. They accumulate and cause the white spots that limit plant growth."

While too much soil water causes salinity, the lack of snowmelt this year led to more evaporation than infiltration, causing the white spots to expand this spring. In years with more spring snowmelt, the salt spots may not be as noticeable because saline soils do not turn white unless they are dry.

The first step to salinity management is testing the soil for electrical conductance (EC). Salt raises the EC. Crops have different tolerances to salt.

Augustin recommends that when the EC is above 2 millimhos per centimeter(mmhos/cm), producers should consider planting a more salt-tolerant crop such as barley, sunflowers or canola. Producers should not plant soybeans and corn in those areas because those crops are not salt-tolerant.

Planting cover crops after harvest can help dry down a soil. A mixture of barley, canola and sugar beets is a good cover crop choice. Full-season cover crops should be planted in areas where cash crops do not emerge after planting.

Also, plant the cover crop as early as possible to maximize water use.In extreme cases where salt-tolerant cover crops such as barley or canola do not grow (EC is 8 mmhos/cm or higher), plant a perennial, salt-tolerant grass such as tall wheatgrass, western wheatgrass, beardless wildrye or
NewHy hybrid wheatgrass. 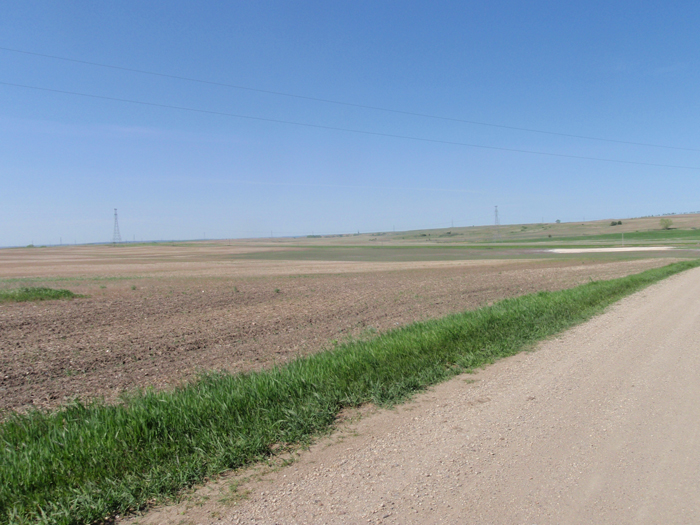 "The perennial grass alone won't fix the issue, but it can prevent the white spot from spreading," Augustin says. "Control of these areas requires constant management during a period of years with soil testing."

Once the EC drops below 2 mmhos/cm, most crops can be planted. But soil EC still should be monitored, and if the EC starts to rise, producers should plant salt- tolerant cover crops following salt-tolerant cash crops.

"Subsurface drainage (drain tile) is another way to manage soil salinity," Augustin says. "Drain tile allows salts to leach out of the soil and be flushed out of a field. However, this is costly and still requires a number of years to reclaim a saline area. This management practice also requires spring snowmelt and rain events to dissolve and leach salts."