No-Till Used on Over Half of Major Cropland Acres, but Not Continuously 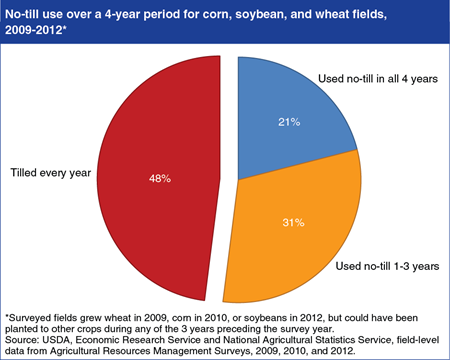 Soil health improves when farmers refrain from disturbing the soil. While no-till production systems are increasingly used on land in corn, soybeans, and wheat — the three largest U.S. crops by acreage — they are not necessarily used every year. Field-level data, collected through the Agricultural Resource Management Survey, show that farmers often rotate no-till with other tillage systems.

Farmers growing wheat (in 2009), corn (in 2010) and soybeans (in 2012) were asked about no-till use in the survey year and the 3 previous years. No-till was used continuously over the 4-year period on 21% of surveyed acres. On almost half of the cropland surveyed, farmers did not use no-till.

Some of the benefit of using no-till, including higher organic matter and greater carbon sequestration, is realized only if no-till is applied continuously over a number of years. Nonetheless, because tilling the soil can help control weeds and pests, some farmers rotate tillage practices much like they rotate crops. This chart is drawn from data reported in ARMS Farm Financial and Crop Production Practices, updated in December 2014.

Franks Comments: With Well Over Half of All Pennsylvania Crop Land Listed as Highly Erodible, the State’s Growers are Now No-Tilling an Incredible 66% of the Overall Crop Acreage

USDA Reports Over Half of U.S. Corn Mature