A growing dairy operation prompted a Wisconsin farm to adopt more conservation practices, giving them healthier, mellower soil and better use of time and labor while maintaining yields.

For about 10-15 years, no-tilling corn into 300 acres of soybean stubble was the extent of the Kieler family’s use of the conservation practice.

But that changed as their dairy operation began to grow. With the Kielers quadrupling their number of dairy cows from 100 to 400 within the last 15 years, they’ve transitioned to more corn silage production and have ramped up adoption of no-till, as well as cover crops, to protect their hilly fields in Platteville, Wis., from erosion and save on labor, fuel and equipment costs.

In addition to the expanding dairy operation, the Kielers built a new farm 2 years ago for their 200 steers and switched from upright silos to bunkers. With the new setup they determined it’d be easier to eliminate their corn earlage production and just grow corn silage. With that came an increase in their use of no-till.

“We don’t want to do any tillage on the corn silage in the fall,” Eric Kieler says. “It just turns to fodder and washes bad.”

Eric, who farms with his parents, Ann and Louie, wife, Leah, sister Renee, and brother-in-law, Matt, along with a few full-time and part-time employees, oversees most of the crop work and equipment maintenance on the family farm.

The Kielers grow about 1,200 acres of corn and 300 acres of soybeans, with the rest of their 1,000 acres primarily in alfalfa hay. Aside from a few acres of continuous corn, their rotation is typically 3 years corn, oats and then 2-3 years of hay. On their better fields, soybeans will replace one of the 3 years of corn.

In addition to no-tilling corn into the soybean stubble, they no-till soybeans into corn stubble and have also no-tilled corn into alfalfa. This year they no-tilled 20 acres of alfalfa with oats into their soybean stubble. Eric says the ground was soft enough to plant the alfalfa into without any problems. Farming mostly clay-loam soils, he could see it being more of a challenge on their heavier clay ground, so they plan to continue experimenting with the alfalfa-oat mix on their fields where the clay isn’t as heavy. 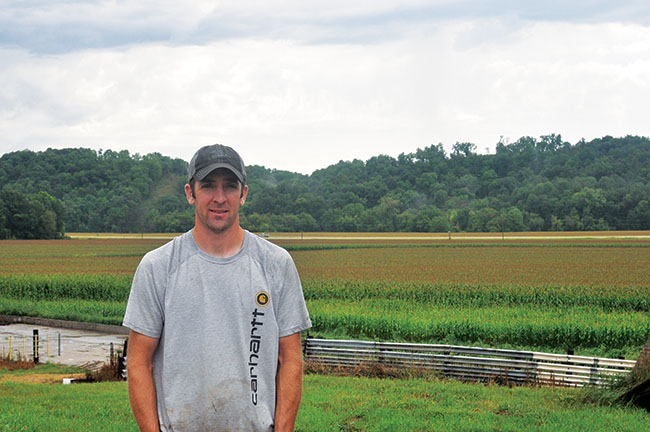 While their no-till practice is still a work in progress, Eric says yields for their no-tilled crops have been comparable to their conventionally tilled acres. Their yield averages are around 190-200 bushels per acre for corn and 60 bushels an acre for soybeans.

No-till has also helped preserve their hilly fields — which range from 6-12% slopes — by mitigating erosion. In fact, Eric says erosion control has been the primary reason for increasing no-till adoption and adding cover crops to their system.

Prior to moving away from earlage, the corn silage the Kielers grew was just on bottomlands. But as soon as they started producing it on their hillsides, soil erosion became an issue. So about 4 years ago they started using annual ryegrass as a cover crop.

Annual ryegrass and oats are now the two cover crops they primarily use, as they’re easy to grow in the cold weather and will provide a lot of cover. Another benefit is they can graze the steers on them.

The Kielers also tried radishes recently, but were disappointed with the lack of growth they achieved. They seeded them after corn silage, and Eric thinks their location is too cold during that time of year to achieve the compaction-breaking benefits other no-tillers may witness with radishes.

They seed covers with their Great Plains drill on all of their harvested corn silage acres. Annual ryegrass is seeded at 90 pounds per acre and oats are seeded at 2-2½ bushels.

While the oats will winterkill, the annual ryegrass is terminated in the spring. Eric says they wait until it’s actively growing and triples in height over the course of a few days, which is usually around early April. They use the high side of the recommended rate of glyphosate and have had good success with killing it.

One challenge with annual ryegrass, Eric says, is the large root mass can keep everything wet and cool in their heavier soil, which makes closing the seed trench more challenging.

Overall they’re pleased with their cover-crop program, not only for erosion control, but also for fighting weeds. Lambsquarter, ragweed and foxtail are the main weeds they battle, but their corn silage ground is cleaner in the fall.

Eric has also noticed improved soil health due to no-till and covers, particularly with residue breakdown.

“I think everything’s getting healthier. It’s the whole combination of no-till, manure and getting the organic matter,” he says. “Your poorer fields, you can tell there’s no residue breakdown or anything. But on your best fields, everything works better.”

It also makes planting easier. They planted corn back into winterkilled oats that were seeded after corn silage, and Eric recalls how mellow the soil was.

“You can tell it’s a healthier soil. It’s just mellow and it’s easier to plant back into,” he says.

The Kielers use a 12-row Kinze 3600 planter with 30-inch spacings and 15-inch interplants for their corn and soybeans. It’s currently set up with Kinze factory row cleaners, which Eric is looking to switch out for ones that can be hydraulically adjusted on the go from the cab to accommodate different field conditions. In no-tilled fields the row cleaners aren’t doing enough to clear the residue, he says, while in conventionally tilled fields they’re disturbing too much soil. 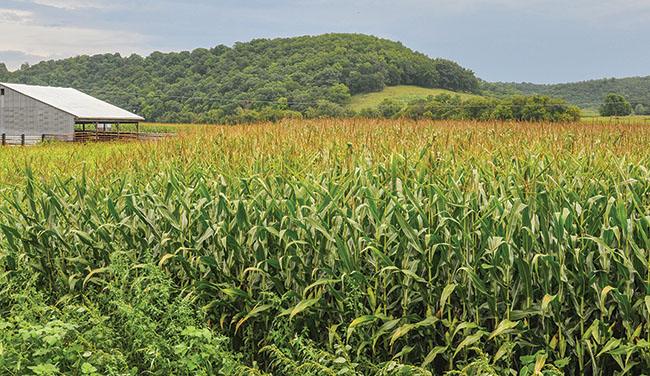 The Kinze planter also has a wavy coulter, which Eric is considering removing, as he thinks it’s hair-pinning too much residue. The row units also have Totally Tubular starter fertilizer tubes, Keeton seed firmers and rubber closing wheels.

The Kielers apply 5 gallons per acre of XLR-rate 7-23-5 starter fertilizer, and follow up with an application of either urea or 28% liquid nitrogen, depending on the price. The last few years urea has made up about three quarters of their N program, Eric says. They fly on the urea and then add 15 gallons of 28% N in replacement of water when they spray pre-emergence herbicide.

He adds that they adjust their fertility needs based on where they’ve applied manure. About a quarter of their acres usually have manure spread on them, with the majority of it going on fields with continuous corn so they don’t have to apply extra fertilizer. The Kielers hire a company to spread it with tanks or a dragline for injection, depending on the field and time of year. They spread it at 8,000-12,000 gallons per acre.

They’ve also tried spreading urea on standing corn with a high-clearance spinner in late June to serve as a sidedress application.

“I think it’s good to split the N up, but sidedressing’s not a real practical thing around this area because fields are rolling and twisting and you can’t pull anything through there,” Eric says. “You do too much damage.”

He adds that using N stabilizers like Instinct and Agrotain the past few years has helped their N efficiency.

For their soybeans, they put down 200-300 pounds of potash and 100 pounds ammonium sulfate the previous fall. They also spread manure on their hay ground once a year.

In addition to fertilizer, the Kielers are also using fungicides and insecticides to minimize stresses on plants. In the last few years they’ve used a fair amount of fungicide, Eric says, mostly on oats. They mainly use Headline, which they’ve also been spraying on their hay and about half of their corn.

“For the hay, I think it keeps it greener to the bottom, and the regrowth comes back quite a bit quicker,” he says. “With corn it sometimes helps. I don’t always know if there’s a yield benefit, but it helps the stand. If it’s still standing when you go to pick it, that’s a benefit too, even if it didn’t yield any more.”

They’ve also been mixing Capture insecticide with their starter fertilizer to handle corn rootworm, which they deal with more on their continuous-corn ground.

Eric says it’s made a big impact on their contour strips. In the past, when they were spraying herbicides for Roundup Ready corn or soybeans, they’d either see weeds between the strips or a dead alfalfa crop because it was too difficult to get the spraying precise, he says.

Now the Kielers can spray the contours and control the weeds without having to worry about killing their alfalfa.

Eric thinks this is also helping prevent herbicide resistance, as the weeds that are between the strips are completely killed now instead of receiving a half dose of herbicide because they were right on the edge of the boom.

Their alfalfa is the crop that’s come the furthest along the last few years, Eric says, explaining that clearing the weeds along with the fertility from the manure has allowed the crop to take off. While it’s not completely no-till, the Kielers are looking to implement the practice wherever possible.

“There’s benefits all around,” he says. “Less erosion, labor and equipment, and better soil health. I think we’re going to try to do more, make it fit in wherever we can.”