By Katherine Meitner posted on May 1, 1999 | Posted in Seeding & Planting

This family says relay intercropping soybeans after wheat in the same field in the same year has boosted yield, income, family time and available acreage—while dropping chemical costs in their no-till operation.

Keith Thompson of Osage, Kan., was at his wits end. His family’s no-till operation just wasn’t up to par and he knew if something wasn’t done soon, something had to give.

“Nothing we tried seemed to work,” he says. The only people making money from our operation were the bank and chemical dealer.

“Then we realized we were aimlessly repeating the same process hoping for a different result year after year—which is Albert Einstein’s definition of insanity.”

But Thompson wasn’t insane—although his brother, Doug, father, Jim, and son, Ben, may have thought so when he showed interest in the story of a farmer who was intercropping beans into standing wheat with a conventional drill.

“I kept thinking, ‘This would be just perfect in no-till,’” Thompson says. “We decided to play around with planting times and see if it would fit into our no-till operation.”

So Thompson headed out to the field and assigned 20 of his 2,600 no-till acres to his intercropping idea.

That first year proved to be one of learning for Thompson. Not only did he learn to use Roundup Ready soybeans to cut chemical costs, but he learned important information about no-tilling times. Thompson, wanting to know as much as possible for himself, no-tilled relay soybeans at three different times.

“The first planting was when wheat was 2 or 3 inches tall,” he says. “It didn’t hurt the wheat at all. But the late planting knocked 15 bushels per acre off of the wheat yield. Right now, we no-till wheat in the fall and try to plant the beans as close to April 1 as possible.”

Thompson explains the no-till drill seemed to fall right into the planting ruts left in the wheat. This not only made it difficult for planting, but also cut out a good amount of growing wheat plants.

And then it happened—the ideal planting season occurred in only the family’s second year of relay intercropping beans. It was ideal except for one small detail. They had a late freeze.

“I planted 110 acres,” he says. “We had a perfect stand with the beans. We planted early enough so it didn’t hurt the wheat. With 20 acres protected by trees, we averaged 15 bushels per acre. But there were beans in there making 30 bushels per acre.”

As much encouragement as this second crop provided, Thompson still wanted to ensure his intercropping practice could be profitable. He needed to find a way to no-till soybeans when the wheat was small and harvest wheat when the beans were still small. 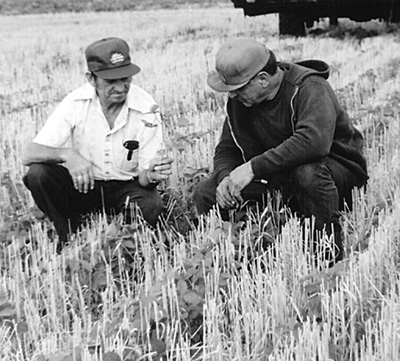 “I was on a mountain-biking trip with some of the best conservationalists around and I happened to mention how I wanted delayed soybean germination,” he says. “I couldn’t believe it when they said there was someone working on a seed coating that could do that.”

This coated seed was being tested by Dr. Ray Stewart, an Intellicoat researcher in California. The coating is specifically designed to delay germination from 15 to 30 days by utilizing a new temperature-set technology.

“The problem we’ve had with intercropping is the beans become really elongated when they’re in competition with the wheat,” Thompson says. “When we harvest the wheat, we sometimes end up cutting beans, too. I’ve seen cotyledons get 8 inches tall in the wheat. Delaying germination would solve the problem of those beans trying to stretch into the sunlight.”

Thompson explains one of the goals in modifying his no-till drill was to get away from leaving ruts. The solution included replacement of the tillage system on the drill with spider wheels, May-Wes wheels and building his own brackets. Keeton seed firmers were also added and have resulted in a significant stand improvement.

“We modified our drill and planter for no-tilling, intercropping and double-cropping to enhance the stands.

“The first year we had starwheels. They were just poking the ground, not doing that good of a job,” he says. “We kicked them out nine degrees and took that heavy duty spring out, put on a lighter spring and ran it in the neutral position. When it’s running in the field, it forms a small mound over the seed and really made a big difference. They were our best corn and sunflower stands.”

“You have to keep current,” he says. “Research is about finding out what doesn’t work. Don’t worry if you don’t know all the answers.”

Here’s some advice Thompson offers based on his family’s own trials, errors and successes with his no-till double-crop soybean operation:

Less than 5% of U.S. Soybeans are Double-Cropped