Regardless of whether you intend to plant a Roundup Ready, Liberty Link, or conventional corn variety this year, it's important to think about the type of weed management program you will utilize.

The University of Missouri has evaluated a lot of different herbicide programs over the years. We took a look at the research results in our database to compare the different types of herbicide program approaches one might utilize for weed management in corn.

Collectively, what all of this indicates is that depending on the year, environment, soil type, and weed spectrum, either of these program approaches might work, but year in and year out, the two-pass herbicide program is most likely to provide the highest levels of weed control and corn yield.

It's important to note that the response to these different programs is likely to vary from one location to another, and will be highly dependent on the weed spectrum that you have in your fields. If you have been using a one-pass pre-emergence herbicide program for years and have no complaints, chances are you probably have a pretty low weed density in your fields, and/or you do not have very many weed species that germinate later in the season.

However, with the typical spectrum of weeds that we have in Missouri (i.e., cocklebur, waterhemp, ragweeds, sunflower, foxtails, fall panicum, etc.), our data show that a post-emergence application is usually required for weeds that have escaped or germinated since the initial pre-emergence herbicide application. 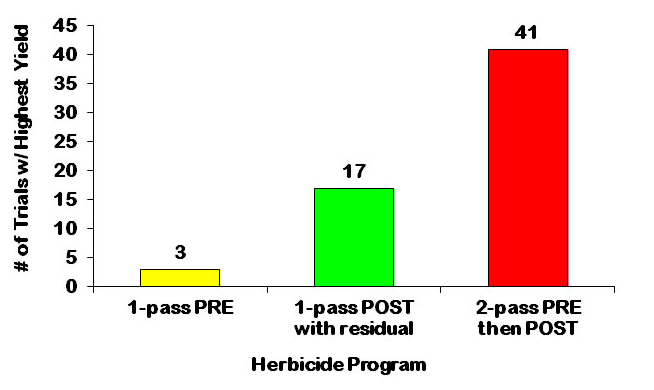