The U.S. Department of Agriculture opened the door Friday to commercial sales of corn and soybean seeds genetically engineered to resist the weed killer 2,4-D, which is best known as an ingredient in the Vietnam War-era herbicide Agent Orange.

The U.S. military stopped using Agent Orange in 1971, and it has not been produced since the 1970s. Scientists don’t believe 2,4-D, which is legal and commonly used by gardeners and some farmers, was responsible for the health problems linked to Agent Orange.

The USDA’s Animal and Plant Health Inspection Service published a draft environmental impact statement Friday as part of the process for potential deregulation of the seeds, which can now be used only in tightly controlled field trials. Deregulation would allow commercial development of the seeds and presumably lead to greater use of the herbicide.

The USDA has oversight over the seeds, not the herbicide.

The public has 45 days to comment on its report. The Environmental Protection Agency is conducting a separate review of 2,4-D, although it previously found it safe to use.

Some corn and soybean farmers have eagerly anticipated a next generation of herbicide-resistant seeds as weeds immune to Monsanto’s Roundup, known generically as glyphosate, become more common. Most corn and soybeans grown in the U.S. are genetically engineered, usually with the Roundup resistant trait.

But some scientists and environmentalists regard the development with alarm, noting 2,4-D can easily drift beyond the area where it is sprayed, threatening neighboring crops and wild plants.

The USDA’s plant inspection agency found the greatest risk from the seeds, developed by Dow AgroSciences, was that increased use of the herbicide could hasten the evolution of weeds resistant to it. But it said resistance was inevitable because 2,4-D, sold by Dow AgroSciences and other companies, is the third most-used weed killer in the nation.

The herbicide has had limited use in corn and soybean farming because it becomes toxic to the plants early in their growth. The new seeds would allow farmers to use 2,4-D throughout the plants’ lives.

The EPA will look at the impact of expanded use of 2,4-D in a report expected to be released for public comment in the coming months. The EPA and APHIS are expected to make final decisions simultaneously on use of the chemical and seeds. That could happen in the spring or early summer.

Dow AgroSciences has asked APHIS to deregulate one variety of corn and two varieties of soybeans. Both soybean varieties resist 2,4-D, but they differ in their immunities to other herbicides. All three seeds have immunity to multiple weed killers.

APHIS said farmers could help deter the development of 2,4-D resistance by using a variety of means to fight weeds and not relying solely on it.

Scientists do not believe 2,4-D was responsible for the health problems in Vietnam veterans that have been linked to Agent Orange. Instead, they have focused on dioxin, a cancer-causing contaminant found in another ingredient known as 2,4,5-T. EPA banned 2,4,5-T in 1985.

“This is an exciting next step toward bringing Enlist to American farmers,” says Damon Palmer, U.S. Commercial Leader, Enlist Weed Control System, Dow AgroSciences. “We’ve just concluded another year focused on collaboration and education—all to pave the way for a successful introduction of the technology.”

University and Dow AgroSciences research trials in 2013 showed exceptional weed control across resistant and susceptible species. Enlist Duo herbicide with Colex-D Technology, a proprietary blend of glyphosate and new 2,4-D choline, will be the herbicide for use with Enlist crops when commercialized.  Dow AgroSciences will recommend a program approach to weed management that includes Enlist Duo and a residual herbicide, such as Sonic in soybeans. The research trials, conducted across the Midwest and Mid-South, showed 98 to 100 percent control on waterhemp, velvetleaf, ragweeds, palmer amaranth and morningglory. 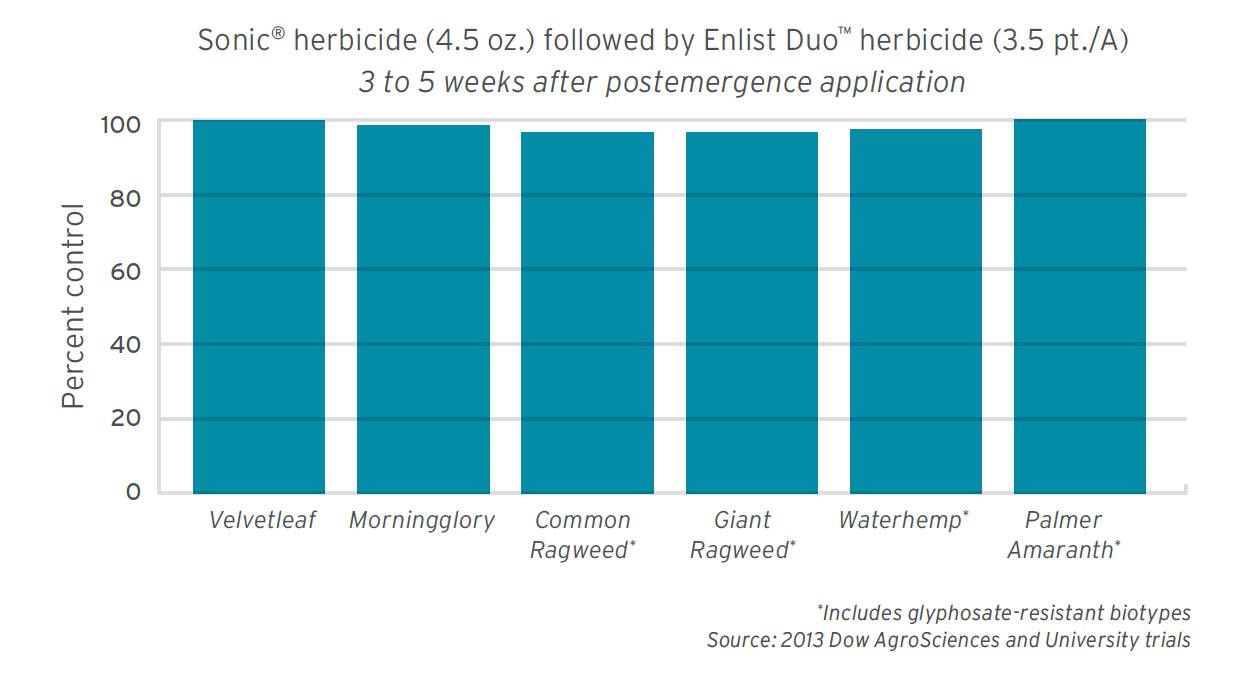 Farmers who participated in the on-farm grower research plots in 2013 saw similar results. All participants rated broadleaf and grass weed control in the highest percentile (90 to 100 percent) and provided positive feedback on herbicide handling.

USDA recently moved the Enlist corn and soybean traits to the next step in the regulatory process by announcing the availability of the DEIS. According to USDA, on January 10 there will be a notice in the Federal Register announcing the opening of a comment period for the DEIS. The comment period is an opportunity for growers and others to provide input on the Enlist corn and soybean traits as USDA conducts its review.

“Comment periods are a key way for farmers to make their voices heard in the regulatory process,” says Bart Schott, former president, National Corn Growers Association. “I would absolutely encourage growers to tell the USDA farmers need access to new technology like Enlist. Technology enables us to compete in the global economy.”

When Will New Herbicide-Resistant Crops Hit the Market?