Across Iowa, many farmers and agronomists are starting to ask if or when to apply fungicide on corn and soybeans.

Like the past few years, there have been very little early season foliar problems on both crops. In soybean, frogeye leaf spot, Cercospora leaf blight, and brown spot have been reported on seedlings. Brown spot is really the only foliar disease still being reported, although soybeans usually grow out of any early season infection. Likewise in corn, very few foliar diseases have been found prior to tasseling.

We have written several previous articles, including 2011 summaries for corn and soybean, fungicide application timing for soybean and a summary of responses on corn. This year we have had questions about spraying fungicides on drought stressed crops and applying half rates of fungicides. We will address both in this article. 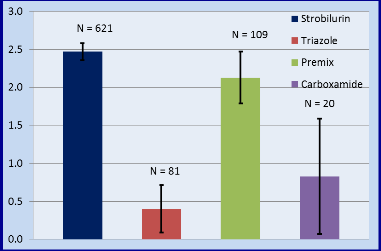 The greatest responses to foliar fungicides we have seen over the past five years in Iowa have been when disease could impact yield of corn or soybean. Similar data have been reported from the north central region and even nationally.

We have found however, that when applying foliar fungicides in absence of significant disease, selecting the right product may make a small difference. In a four-year study funded through the Iowa Soybean Association and soybean checkoff involving hundreds of treatments on soybean across more than 20 total locations, we found that products containing the strobilurin fungicide had a greater response in the absence of disease (Figure 1).

For drought-stressed corn and soybean crops, there is limited scientifically valid data indicating if foliar fungicides will improve water use efficiency and increase yields. One published report on gravevine shows that strobilurins have no effect on water use efficiency (Diaz-Espejo, 2012).

Considering the biology of pathogens and the plants, drought stress will reduce the chances of foliar fungal pathogens becoming established. Drought-stressed plants will also have lower yield potential. Both of these facts give us pause in recommending fungicides for drought-stressed crops.

A caution when spraying fungicides – scout fields after applying the fungicides and look for applications that do not appear to affect disease severity. Resistance to the strobilurin fungicides (Headline ®, Quadris ®, one of two active ingredients in Stratego YLD ® and Quilt ®) in the fungus that causes frogeye leaf spot was reported in Tennessee, Kentucky and Illinois in 2010.

Resistant strains of the fungus were again found in 2011 in the same states and also Missouri. Reduced sensitivity to strobilurin fungicides has been reported for more than 30 pathogens and is often detected within a few years of the product being used on a crop.

There is a reason why chemical companies recommend the rates that are on labels. Research indicates that the recommended rate is most effective against targeted pathogens, but risk management also is strongly considered.

We encourage all farmers and agronomists to follow label rates to ensure that these highly effective disease management tools will be around for a long time.

What questions do you have, or information gaps do you see, with the new soil health tests on the market today?

Teaching And Studying Bring New Insights Into The New-Till World