In most Iowa regions, early fall has been characterized by exceptionally dry conditions due to low rainfall in late summer and early fall, especially since corn and soybean physiological maturity. This may affect quality of soil samples and soil-test results.

Sampling under very dry conditions may increase soil sampling error because it is more difficult to control sampling depth and proper soil core collection. This may be a problem for P and K due to nutrient stratification, which usually is more pronounced in reduced till, no-till and pastures. Both P and K tend to concentrate at or near the soil surface and therefore, the depth control for core collection is very important. Also, when the top inch of soil is very dry and powdery it is very easy to lose this soil portion, which will affect the soil-test result significantly.

Short-term nutrient recycling from plant residues and the equilibrium between soil nutrient pools also may be affected by rainfall, especially for potassium (K). Potassium is present in the soil in water-soluble, easily exchangeable and slowly exchangeable forms, and in mineral (unavailable) K form. Potassium in fertilizer and manure sources is water soluble and application quickly increases the solution and exchangeable K pools, which are readily available for crops. Potassium in plant tissue also is soluble in water, because little or no K combines in organic compounds.

With dry soil at the end of the growing season, this replenishment of the solution and easily exchangeable K fractions, which is what soil tests measure, is limited or does not occur. These processes also occur for phosphorus (P), but to a much lesser extent and through completely different mechanisms.

Starting in 2009 a project has been focusing on K release from plants and residue in corn and soybean fields. At physiological maturity and at the normal grain harvest time the above-ground portion of plants (grain and vegetative parts) were sampled, weighed and analyzed for K concentration. After grain harvest, residue left on the ground also was weighed and analyzed for K concentration several times until April of the next year.

Figure 1 summarizes average results for five soybean fields. Available results for two cornfields showed approximately similar trends (not shown). There was a very sharp decrease in the amount of K remaining in vegetative tissue from physiological maturity until harvest.

This sharp decrease can be explained by K contained in dropped leaves (which were not collected if they were badly contaminated with soil) and K leaching out of the standing biomass. There was a sharp K decrease in the crop residue from harvest until late fall, and a much smaller decrease in spring. The K content of residue changed little during winter (with snow and frozen ground).

There was significant variation in patterns of K loss from plant tissue and residue most likely related to rainfall amount and distribution. The study of rainfall patterns along with the K test results has not been completed at this time, and the research continues this year. The preliminary results strongly suggest, however, that with little or no rainfall from crop physiological maturity until soil sampling there is less K recycling from plant tissue and crop residue and lower soil-test K values than with normal rainfall. 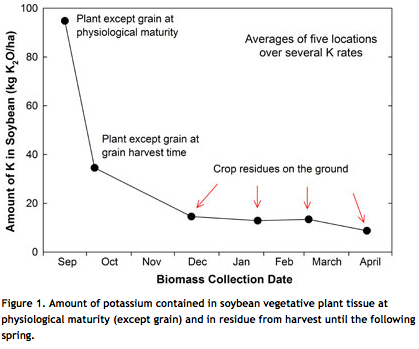