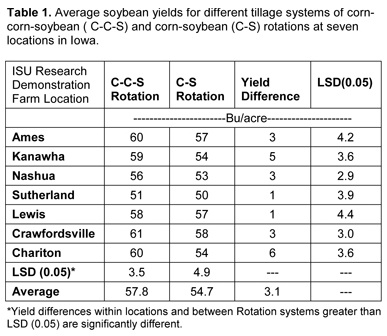 On the other hand, soybean yields under different tillage systems are similar at a given location, although differences in yield between soil types still exist.

This is encouraging news for producers who are reluctant to switch to no-tillage soybean after corn due to concerns of poor crop performance. With current increases in diesel fuel prices, some growers could save costs by minimizing tillage passes before planting soybeans.

The experiment was replicated with a completely randomized experimental design. One of the objectives of these studies is to determine the interaction of tillage systems and crop rotations effect on corn and soybean production at different locations.

Soybean yield following one year corn or two years corn in the rotation shows different yield responses. Soybean yield in C-C-S rotations was on average 5 to 6 percent greater than soybean after one year corn (C-S) across all tillage systems and across the state (Table 1).

However, the differences were variable among years and locations in various parts of the state. These differences reflect the effect of site specific conditions and management. But the trend shows an advantage in soybean yield following two consecutive years of corn over one year of corn in the rotation.

Potential causes for better performance of soybean after two years of corn may be due to reduced risk of some soybean diseases because of a break in disease cycle that may be associated with the corn-soybean rotation as documented in some research.

Our results confirm other research findings here in Iowa that soybean yield after two years of corn have a slight advantage over soybean yield following one year corn. Economic return, input cost and other management considerations must all be taken into account before deciding to change crop rotations.

Mahdi Al-Kaisi is an associate professor in agronomy with research and extension responsibilities in soil management and environmental soil science. He can be reached at malkaisi@iastate.edu.

How Does Timing of Stress Affect Corn Yield?