September 23, 2019 | Posted in Cover Crops
Source: University of Nebraska-Lincoln, Institute of Agriculture and Natural Resources
Pictured Above: Figure 1. This cereal rye cover crop is at the threshold (1,000 lb/ac) biomass level. It is about 6-8 inches tall (April 13, 2017 at the south-central Nebraska site).

Cover crops have to produce a certain amount of growth, or biomass, in order to effectively reduce erosion and soil nutrient loss, suppress weeds, and supply forage. Several studies have indicated a threshold or minimum biomass (dry matter) of 1,000 lb/ac, which is similar to 6 to 8 inches of above-ground growth (Figure 1), although more biomass will likely lead to better outcomes.

Cover crops planted after corn harvest have little time to grow. To provide a longer season for cover crops, they can be broadcast interseeded by airplane or high-clearance equipment before corn harvest in late summer. However, their emergence may be low due to the lack of seed-to-soil contact.

We assessed whether two types of cover crops, cereal rye (planted at 60 lb/ac) and a mix (30 lb/a of rye, 20 lb/a of winter pea, 8 lb/a of hairy vetch, 4 lb/a of brassicas), planted either pre-corn harvest or post-corn harvest, would achieve the biomass threshold of 1,000 lb/ac. The pre-harvest planting was carried out by spreading seed by hand into corn stands in September to simulate broadcasting either by high clearance equipment or aerial seeding. The post-harvest planting was carried out with a no-till drill between mid-October and late November. We conducted trials at three research stations in south-central, eastern, and northeast Nebraska over four years (2015 to 2018). 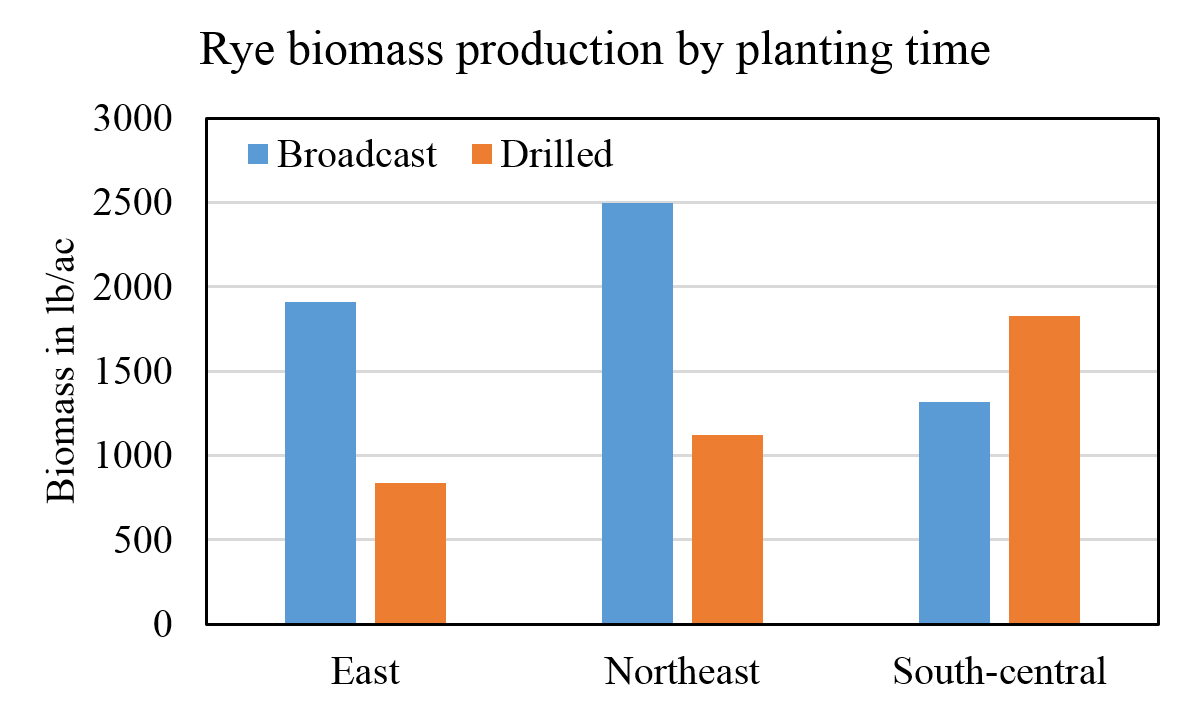 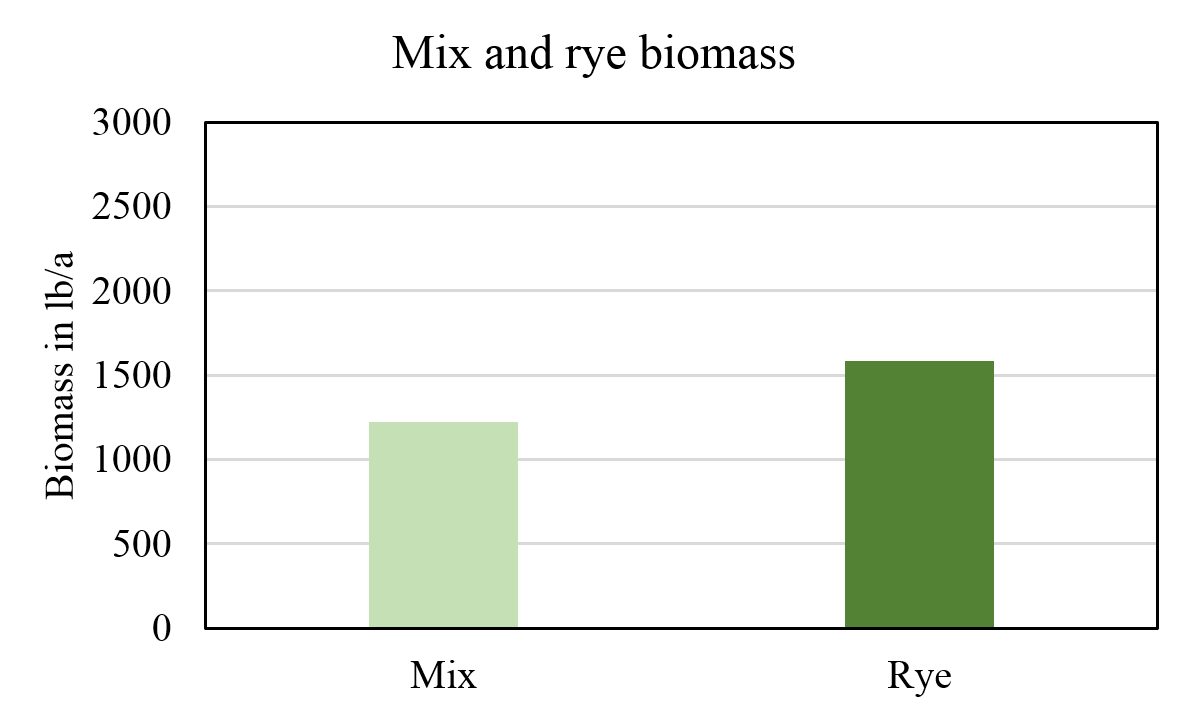 Figure 3. Mix and rye cover crop spring biomass production in lb/ac averaged across eastern, northeast and south-central sites and both planting methods for all four years.

Overall, the mix biomass was lower than the rye biomass (Figure 3). The brassicas in the mix winterkilled, and hairy vetch and winter pea produced very little growth. Thus, the mix can be thought of as rye planted at 30 lb/ac. Despite this low seeding rate, the mix produced more than the threshold biomass at the south-central sites in both planting times, and at the northeast site in the pre-harvest planting (Figure 4). 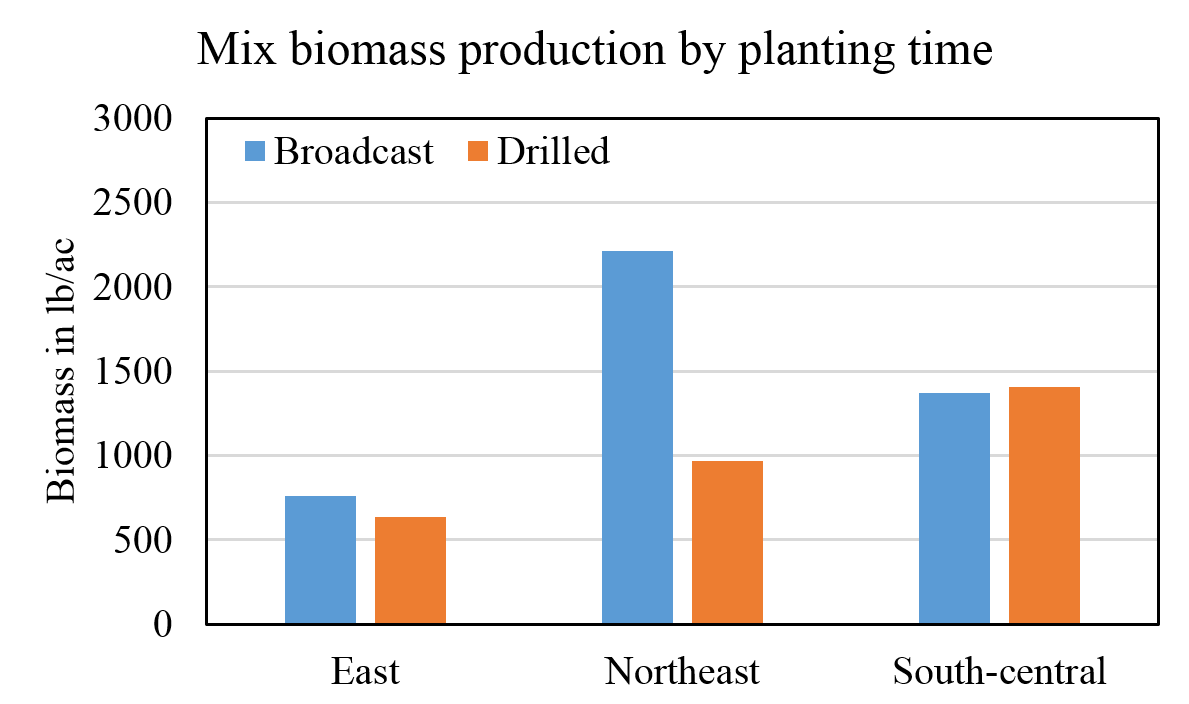 Cover crops will only achieve their purpose and be successful if they produce sufficient biomass. Best management practices for cover crops in northeast and eastern Nebraska should focus on planting pre-harvest and planting rye. In south-central Nebraska, post-harvest planting is more productive, and mixes may be as productive as rye.

The Nebraska Corn Board and the Nebraska Soybean Board provided funding for this project.