By John Dobberstein posted on March 15, 2011 | Posted in Water Management

It appears no-till is already playing a major role in cleaning up Chesapeake Bay as the government and farm groups continue their debate on how to reduce nutrient and sediment runoff into the massive watershed.

In a study released Tuesday, the NRCS says 88% of cropland in the watershed is under some form of conservation tillage, with 48% being no-till and 40% classified as mulch-till, strip-till or other reduced-tillage methods. 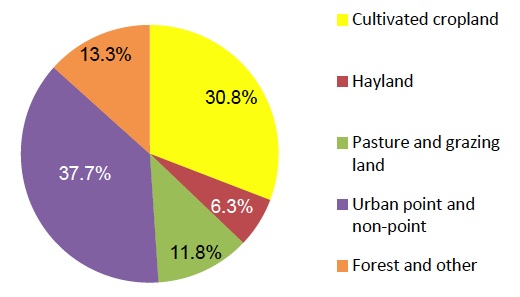 Urban areas, forests, and cultivated cropland together account for nearly 82% of the nitrogen delivered to rivers and streams in the Chesapeake Bay watershed. (Source: NRCS)

The agency also says cover crops could play a major role in reducing the number of acres that require some type of action to reduce the risk of pollution.

About 46% of the watershed’s cropland has structural practices, such as terraces, buffers and grassed waterways that mitigate agricultural impacts on the watershed.

The figures come from the Conservation Effects Assessment Project (CEAP) study of the Chesapeake Bay region, a study covering 3 years’ worth of data on conservation practices at individual farms.

NRCS Chief Dave White says the study shows that a “voluntary approach” to reducing pollution pressures in the Bay is working.

“If you look at the amount of cropland in the Bay with structural practices or conservation tillage or both, 96% of the cropland has some sort of conservation applied to it, which is astounding,” White says.

Major findings of the NRCS study:

• Conservation practices between 2003 and 2006 have reduced edge-of-field losses of sediment by 55%; nitrogen in surface runoff by 42%; nitrogen in subsurface flow by 31%; and phosphorus by 40%.

• Appropriate rates of nitrogen application are in use on about 35% of the acres receiving nitrogen (including manure) for all crops in the rotation.

• Appropriate timing of nitrogen application is in use on about 54% of the acres receiving nitrogen (including manure) for all crops in the rotation.

• Good nitrogen management practices (rate, timing and method) are in use on about 13% of the acres receiving nitrogen (including manure) for all crops during every year of production.

• Good phosphorus management practices (rate, timing and method) are in use on 17% of the acres receiving phosphorus (including manure) for all crops during every year of production.

EQIP has been the most effective program in boosting conservation efforts in the watershed, White says, because it has the most funding and latitude, and it covers cropland, pasture, animal feeding and other areas.

Pollution from urban and non-urban sources has been a longtime problem in the Chesapeake Bay watershed, which encompasses 68,500 square miles and includes Delaware, Maryland, New York, Pennsylvania, Virginia, West Virginia and the District of Columbia.

Chesapeake Bay itself is more than 200 miles long and the largest estuary in the U.S., and the Bay and its tributaries cover about 4,500 square miles of open water.

Agricultural land makes up less than 30% of the watershed, (including 10% cultivated) while forest covers 59% and urban land 8%. But cultivated cropland delivers 22% of the sediment, 31% of the nitrogen and 28% of the phosphorus to rivers and streams in the watershed.

Last December, the U.S. EPA approved a “pollution diet” of sorts for the watershed that includes an enforceable “Total Daily Maximum Load” of nitrogen, phosphorus and sediment that can be discharged into the watershed from various sources.

The American Farm Bureau Federation, concerned about the financial impact of the regulations, filed a lawsuit in federal court in Pennsylvania last January to stop the plan. The AFBF argues that the EPA’s methods to determine the bay’s pollution are flawed.

The CEAP study’s findings are based on surveys of 700 farmers in the watershed area who filled out 44-page surveys on their farming and land management practices, with the assistance of local NRCS enumerators.

The NRCS used different models to calculate the impacts of the conservation methods and estimate the results had the measures not been undertaken.

White says there’s plenty room for improvement in conservation efforts in the watershed, especially with nutrient and phosphorus management.

Nitrogen loss from leaching and overland flow is the biggest concern for Chesapeake Bay growers, who get an average of 8 inches more rain each year than growers in the Mississippi River basin, White says.

They also have 5 times the number of acres with high or moderately high leaching potential, and a higher percentage of highly erodible land (HEL).

White says 43% of Bay-area farmers are applying nitrogen too soon, before the crop needs it, and in some cases too much is being applied — up to 1.4 times the removal rate. And only 35% of the farmers are using methods like banding or spot application.

The Chesapeake Bay CEAP study is the second of 10 such projects that were authorized by the 2002 Farm Bill. The studies are examining the effect of conservation practices on cropland, wetlands, grazing areas, watersheds and other areas.

The first CEAP report on cropland, released last year, covered the Mississippi River watershed. The detailed report found that fertilizer use among farmers in the basin wasn’t increasing, but leaky tile systems are likely to blame for nutrient runoff and pollution issues.