Bean leaf beetle adults are susceptible to cold weather, and most will die if exposed to air temperatures below 14°F. However, they avoid harsh temperatures by burrowing under plant debris and loose soil. Each spring, adult beetles emerge from their overwintering habitat and migrate to available hosts, such as alfalfa, tick trefoil, and various clovers. As the season progresses, bean leaf beetles move to preferred hosts, like soybean. While initial adult activity can begin before soybean emergence, peak abundance often coincides with early-vegetative soybean.

We can estimate winter mortality based on accumulated subfreezing temperatures using an overwintering survival model developed by Lam and Pedigo from Iowa State University in 2000. Predicted mortality rates in Iowa are variable for the 2021-2022 winter, ranging from 58-97% (Figure 1). Mortality was highest in northern and central Iowa (78-97%); the average mortality rate across Iowa was 73% for the 2021-2022 winter. 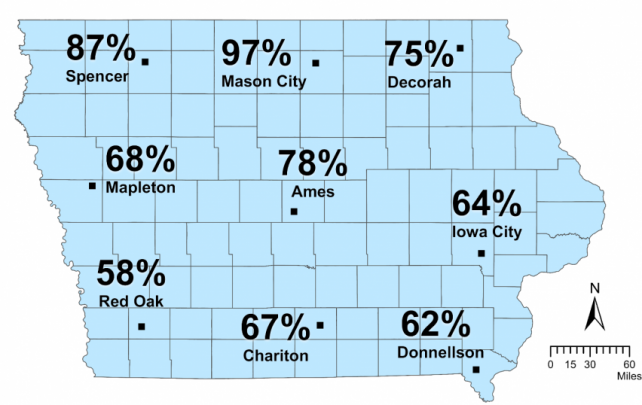 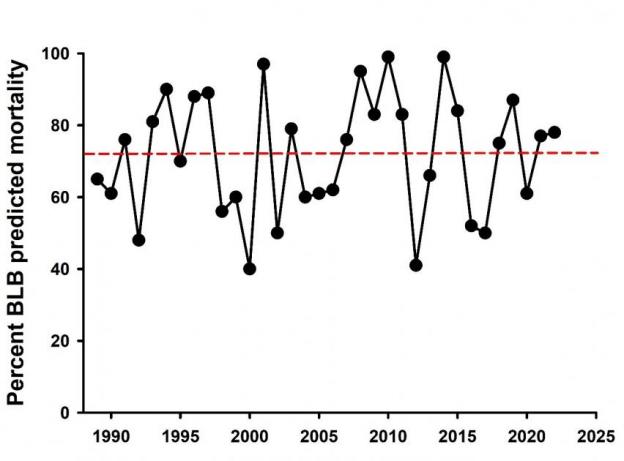 Although overwintering beetle populations are expected to be lower than last year throughout much of the state, it is important to scout for this pest. Scout soybean fields, especially if:

Sampling early in the season requires you to be “sneaky” to accurately estimate densities as bean leaf beetles are easily disturbed and will drop from plants and seek shelter in soil cracks or under debris. Although overwintering beetles rarely cause economic damage, their presence may be an indicator of building first and second generations later in the season. More detailed information about bean leaf beetle and bean pod mottle virus are available online.