The last few years have been harsh on overwintering bean leaf beetles in Iowa. 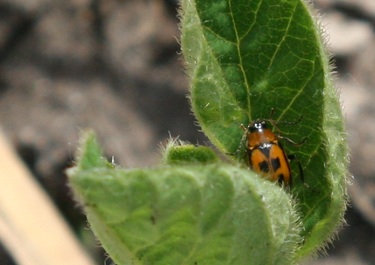 A combination of cold winter temperatures and the increased use of insecticidal seed treatments have curbed bean leaf beetle densities throughout much of the state.

There is also decreased risk and incidence of bean pod mottle virus as a result of low beetle populations, as summarized in an April 2010 ICM News article on the topic.

Adults have adapted to Iowa's winters by protecting themselves in leaf litter and under snow cover, but they are still susceptible to cold temperatures.

If exposed, adults will die if the temperature is below -10°C. An overwintering survival model was developed by Lam and Pedigo from Iowa State University in 2000, and is helpful for predicting winter mortality based on accumulating subfreezing temperatures. 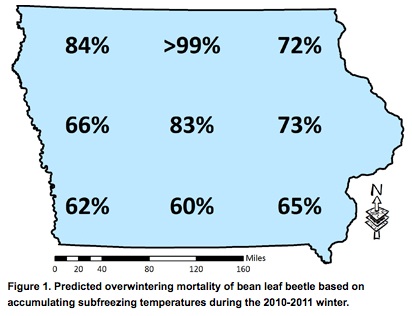 Figure 1 is a map of the predicted 2010-2011 winter mortality in Iowa. In general, Iowa experienced moderate winter temperatures, with predicted mortality ranging from 60-99 percent.

These numbers are lower compared to recent winters 2008-2009 and 2009-2010. The mortality prediction model indicates the southern third of the state is likely to see more overwintering adult survival compared to the last few years.

Overwintering adults are strongly attracted to soybean and will move into newly emerging fields. Bean leaf beetle is easily disturbed and will drop from plants and seek shelter in soil cracks or under debris.

Sampling early in the season requires you to be sneaky to estimate actual densities. Although overwintering beetles rarely cause economic damage, their presence may be an indicator of building first and second generations later in the season.